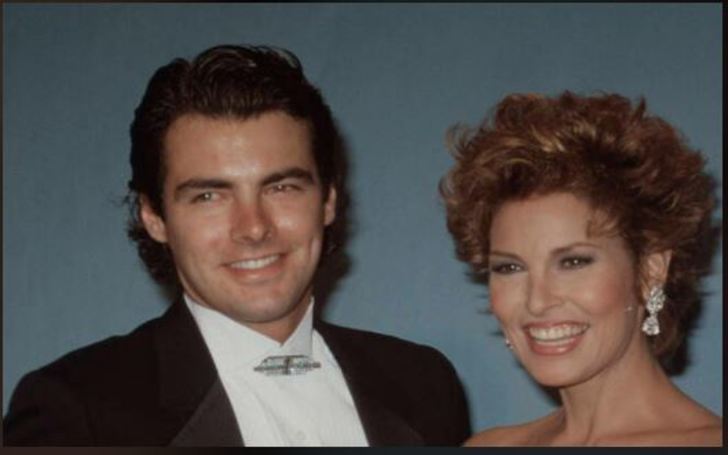 Damon Welch (full name, Damon James Welch) is the son of model/actor/businesswoman, Raquel Welch and her ex-husband, James Welch. Raquel’s son, Damon is an actor turned computer consultant. After working in movies like J-Men Forever and Intimate Portrait, he unofficially retired from acting and has been living a non-celebrity life ever since.

Damon is just another celebrity who grew up under the massive fame of his parent. For his actress mother, Raquel Welch, life as an enduring sex symbol wasn’t always easy. And same was the case for Damon.

Fast forward to the present the situation looks rather amicable for the mother and son. But why did Damon Welch quit acting and how is he doing living a normal life? Is he married? Does he have children? Know all these in the details that are to follow.

Damon Welch Is A Computer Guy

Welch was born November 6, 1959 (age 62 years), in San Diego, California. His mother had just graduated from La Jolla High School, California when she became pregnant with him.

His maternal grandfather, Armando Carlos Tejada Urquizo (1911–1976) was an aeronautical engineer from La Paz, Bolivia. From his mother’s side, Damon Welch is of Spanish descent and has a bit of English ancestry. His uncle (also Raquel’s cousin), Bolivian politician Lidia Gueiler Tejada (1921–2011), was the first female President of Bolivia and the second female head of state in the Americas.

Damon graduated from Boston University with a degree from the College of Communication.

As per his LinkedIn, he also studied Bachelor of Science in communication and media studies at Boston University.
For 10 years, from 2001 to 2010, Raquel’s first child worked as an administrator for information systems at J&B asset management in Greater Los Angeles Area.

He is currently a computer and network administrator professional in Little Elm, Texas.

He Didn’t Have A Good Relationship With His Mother, Raquel Welch

Amidst her growing popularity in the media, the A-list celeb admittedly put her career first and her marriage and children second. She has often confessed and showed regret for “the many, many other times I wasn’t there for Damon and Tahnee.” She added she cannot replace those times and admitted that it was painful for her later and her children since the beginning.

Though as of the present, all seems quite well between the mother and her children. Talking about her children in her biography, Raquel writes her children, Damon and Tahnee Welch are a source of pride and hope for her because of the kind of people they are. She admits her kids have always grounded her and given her purpose.

His Father, James Welch Is A Multimillionaire

After divorcing his mother, Welch’s father, James became a multimillionaire real estate developer. He remarried a woman named Jean and had a son.

In an interview, the Golden Globe-winning actress said her breakup with her children’s father remains the most painful decision of her entire life.

After divorcing his father, Welch’s mother married Patrick Curtis. She then tied the knot with French-American producer, Andre Weinfield and then to an actor, Richard Palmer.

Including Damon’s father, Raquel Welch experienced matrimony four times, with four different men. Though none last forever. She now though has chosen to spend the rest of her life alone.

His Sibling Is Famous In Europe

Damon has one younger sister, Tahnee Welch. She is also quite famous on her own. Much like her mother, she also once was a Playboy model.

Welch’s sister, Tahnee is known for playing in Ron Howard’s blockbuster film, Cocoon. She though is most notable in the European entertainment industry. She gained quite a following in Italy for shows like Amarsi un po’… and Disperatamente Giulia. Likewise, her other notable films include Search and Destroy, I Shot Andy Warhol.

He first got to work in the movie as a production assistant in the 1979 comedy film J-Men Forever starring Peter Bergman and Phil Proctor. He then served as a production associate in his mother’s fitness video, Raquel: Total Beauty And Fitness.

Damon has also appeared as himself in the TV series documentary, Intimate Portrait (2001) and in another documentary, titled, Raquel Welch: Beyond the Fantasy (1995). Raquel and James’ son has one uncredited role in the 1971 film, The Beloved where he played Yanni as a Boy.

He Was Once Married To Rebecca Trueman

Damon Welch was married to Rebecca Trueman, the daughter of former England cricketer Fred Trueman. The wedding took place on June 5, 1991. They married at Bolton Abbey in the Yorkshire Dales. The couple, however, had already married in Los Angeles in front of just two witnesses.

Sadly the marriage ended after only 15 months.

Damon’s ex-wife, Rebecca who is now in her late ’50s lives in her home in Los Angeles with her second husband.

She is a stylist and fashion buyer, who remarried in 1998 to film editor and producer Welborn Ferrene. Damon’s ex-wife and her current husband have two children.

People Criticized His Mother At His Wedding

Damon’s former in-law (Rebecca’s relative) took quite an offense when his actress/model mother, Raquel Welch showed up at the wedding wearing a figure-hugging dress with a plunging neckline.

Some guests including the bride side accused her of upstaging her then-daughter-in-law by turning up in a show-stopping dress; displaying a cleavage.

Though Damon Welch’s Ex-Wife Is Okay With His Mother

Years after the incident happened, in Oct 2020, Welch’s former partner, Rebecca finally expressed her opinion about Raquel’s attire at her wedding. Speaking from Los Angeles, she said while everyone found it upsetting, the fact is that she wore a beautiful embroidered jacket over the dress to come in the church.

Trueman explained all her former mother-in-law did was that she tried to respect English tradition and tried to wear an English dress and jacket ensemble. She said Damon’s mother looked very stylish and beautiful on the day.

Damon’s ex-spouse, however, added, Raquel’s removing the jacket and thereby flashing her cleavage was something that caught people by surprise.

His Ex-Wife Shared A Close Bond With His Mother

Although Rebecca has not met Damon’s mother since the marriage ended, she recently said Raquel was quite close to her.

Speaking positively of Raquel on her birth anniversary, she said she would only wish her the happiest of birthdays for she has a huge appreciation for the time she had spent with her. Rebecca also admired her intelligence and wit. Welch’s ex-spouse said the former Playboy model was always kind to her.

Trueman also spoke of her humor.

Where Is Damon Welch Today? Did He Remarry?

Not so much about Damon Welch is known as of recent other than the fact that he resides in Texas. Yet, of all the other things, it is at least certain that he has left his Hollywood days far behind him. Presumably, it has been quite a while since the son of the most desired woman shifted his career from show business to technology.

In like manner, it is also unclear if Damon is married or has a family of his own. However, considering that he has already hit his 60s, he might have some or few families of his own.

Given he is a tech man, he might be doing fair in terms of monetary concerns. However, it’s a whole different game of guessing whether he has built a status out of it.

Whatever the case, it very well couldn’t be the case where he is anywhere near as rich as his mother, Raquel who has an astounding net worth of over $40million.