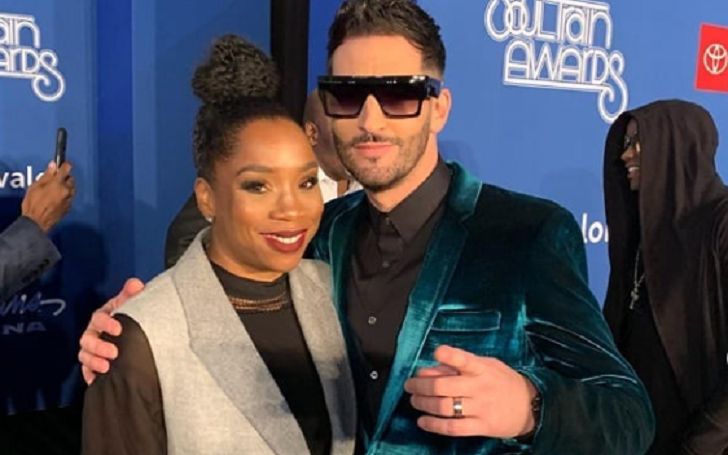 Danette Jackson is the wife of singer and songwriter Jonathan D Buck (better known as Jon B.) Her artistic husband came into the limelight after his debut studio album, Bonafide earned the platinum certificate. It likewise became late rapper Tupac Shakur‘s favorite record.

Besides, talking about their marriage, the two have been in a delightful marital relationship for over a decade. They are also proud parents of two daughters.

In this article, let us try to find out more about Jon B’s wife Danette!

How old is Danette Jackson? Details on Her Birthday and Early Life

Jackson is aged 41 as of 2021. She was born in November 1979, in the United States of America. Back on 17th November 2020, celebrating Danette’s 41st birthday, one of her colleagues shared a beautiful photo of themselves on Insta. She captioned it,

“Happy Birthday to the Queeeeeen!!!! Appreciate you so much, Danette!”

Besides, talking of her nationality, Danette is an American and belongs to the Afro-American ethnicity.

Meanwhile, the information regarding her family details and other early details remains behind closed doors. On the other hand, Jackson’s husband Jon B., who belongs to a musical family is the son of David, a professor of music, and Linda, a concert pianist. His brother Kevin is also a cellist.

Needless to mention, Danette is a celebrity spouse who has been in the media for a long time. Her hubby, John B was initially influenced by several famed artistic figures like Duran Duran, Marvin Gaye, Michael Jackson, Babyface, and Prince. Later on, Jon B released a number of hit albums like Pleasures U Like, Stronger Everyday, Helpless Romantic, and others.

How Long Has Danette Jackson Been Married to Jon B?

The couple tied the knot back in 2007, in a low-key wedding ceremony attended by their close friends and family members.

Their marriage is interracial but it never bothers the couple. Back in the late 1990s, the singer told Vibe Magazine about his attraction for African American women,

“It’s not that I prefer Black girls, but that’s who I find myself relating to as a human being. I am also attracted to really ghetto girls, straight out the hood a thickey, a real pass the hot sauce type girl.”

Regardless of race, it’s been around one and a half decades that Danette and her husband Jon are married and their marital relationship is still going pretty strong.

They often appear together, attending several major functions. A couple of days after Danette’s 39th birthday, the enduring duo attended the Soul Train Awards, where Jon even sang “Happy Birthday” to his wife Danette.

Has two Children with Her Husband Jon B

While Jackson has kept all the family details quite a secret, her life partner Jon often shares loving photos of his kids on social media handles. Celebrating 2018 Father’s Day, the singer and songwriter posted a few photos of his children with the caption,

“Happy Father’s Day to all The Fathers, Step-Fathers, Grandfathers.. Thankful for my girls Azure and L’Wren you give me purpose beyond creativity Honored to be your Dad.”

Years ago, when an interviewer asked Jon about his ability to manage his professional and family life hand in hand, the artist replied that his daughter is too understanding. In his words,

Husband Jon B is a Devoted Family Member

Jon B’s first priority is his family and then his musical career. He once said that his “Family is everything.” The singer further explained,

“I wouldn’t trade my wife and my little six year old baby girl for anything. They are my biggest priority. Before the concert, I took my daughter to Central Park and we just hung out. I brought her along with me on the road.”

So it is quite clear that his support and love for family is great and hope it will remain the same for years to come.

Where is Danette Jackson Now? Know About Her Net Worth

As of now, Jackson resides in Pasadena, California along with her spouse and two kids. In addition, as for her net worth, Danette has a $200,000 fortune.

In the meantime, her hubby Jon has an estimated net worth of $4 million. He has collected such a good amount of money from his extensive musical career.