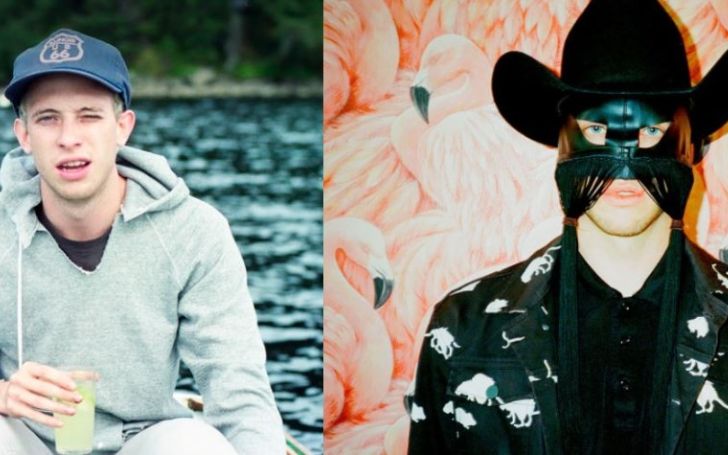 Daniel Pitout is a professional South African singer, songwriter, and musician. He is mostly known for his songs and albums like Spit Gifting, That’s My Man, and Eat Your Mind. He is a former drummer of a famous Canadian group named Nu Sensae.

The band is synonymous with the queercore or queer rock genre. In recent years, however, Pitout has yielded a new semblance, one that shields his face with an exemplary mask. His present allure under the new name, Orville Peck has become the talk of much of independent country music and Americana lately.

With his current appearance, he has managed to gain a cult following of his own. The singer who performs with his face hidden behind a fringed mask seems like a figure destined to reside on the margins of pop culture.

Critics and fans alike are ever so ready to swoon over his mod-styled moody music mixed with Western imagery. Peck/Pitout, who now never appears in character without his mask, though, is rather cagey about his age and upbringing.

Read more about him in the breakdown below; starting with decoding the mystery of whether Daniel Pitout and Orville Peck are the same people. Further know all about his early life, music, popularity, and more.

A handful of sources do claim that Orville Peck is Daniel Pitout and vice versa. And some internet sleuths have identified Peck as Daniel Pitout, the former drummer of a Vancouver punk group called Nü Sensae.

At the Troubadour in 2016, Peck’s manager called him Daniel — the first half of the name that appears in published reports from London’s West End, where Pitout appeared in 2016 in a musical comedy based on Peter Pan.

Pitout now as Peck always wears a mask at least when he is performing. And Peck’s masks and theatric stage presence do immediately grab the audience’s attention.

Why Does Pitout Wear A Mask?

Of his famous mask, Pitout once said he studied them as an art form for two years and believes there’s a misconception about the face shields. The five-foot-eleven or so inches tall artist states his mask allows him to go on stage. It likewise facilitates the queer musical icon to be open and exposed and vulnerable with what he is singing about and what he is saying.

Daniel Pitout Is A Native Of Johannesburg, South Africa

Pitout, born January 6, 1988, grew up in Johannesburg South Africa and he still considers the city his home.  Daniel says he grew up in South Africa just north of Sophiatown (an enclave of Black innovation ravaged by apartheid). Peck lived there until he was 15.

As a child, Pitout did not receive any formal music training, he taught himself music by playing an acoustic guitar and an old Casio keyboard. Daniel is the son of a sound engineer.

As a child, Pitout did voice-over work for cartoons and other media. Growing up, he also trained in ballet for 12 years and performed in musical theatre.

By the time Pitout was in his early 20s, he had been on national tours of musicals. In his mid-20s, the gay cowboy with South African and Canadian roots moved to London to study acting at the London Academy of Music and Dramatic Art and later starred in a play on the West End.

When he was young, his grandfather was a horseback sheriff in [the South African province] KwaZulu-Natal. Peck says his granddad was kind of like a real cowboy and consequently whilst growing up, Pitout had an obsession with all cowboys.

Daniel Was A Drummer In Two Bands Before Becoming Orville Peck

Before the mask and the name Orville Peck, Pitout was the frontman for alt supergroup Eating Out and drummer for scuzzy punk outfit Nü Sensae. With Eating Out, Daniel released the album, Burn in 2013.  Alongside it, came a stellar, 90s-reminiscent music video and a standout track “That’s My Man.”

After that, he performed in a production of The Buddy Holly Story in Chemainus, British Columbia.

The Nu Sensae formed when drummer Daniel Pitout and bassist Andrea Lukic met in high school in Vancouver, and first played shows when they were 18 or 19.

In the initial days with Sensae, Pitout used to do Vancouver house shows. After some time, the band added guitarist Brody Mcknight and played a grand total of 12 shows in 2013 in sweaty South by Southwest. In late 2012, Nü Sensae released their first record as a three-piece, Sundowning, for esteemed Northwest label Suicide Squeeze.

While Pitout first achieved nominal success as a drummer for punk-grunge trio Nü Sensae, he experienced a new level of acclaim in 2017, when he decided to morph into the fringe-masked, gay indie country crooner, Orville Peck.

Since then, he’s topped indie charts with his debut album “Pony” 2019 and his follow-up, “Show Pony” 2020. In July 2020, Orville announced the delayed release of Show Pony until August 14, 2020, in recognition of the Black Lives Matter movement and the protests against police brutality in the United States.

After Pony and Show Pony, Pitout covered what felt like every other magazine; he performed at Dior shows in a custom suit and mask. Pitout or Peck has also collaborated with the Canadian star, Shania Twain for the song “Legends Never Die” from the latter.

He additionally performed at the Coachella and Stagecoach festivals in 2022. The same year in April, he released his second studio album, Bronco with the Columbia records.

The South African-born, Toronto-dwelling singer released Bronco in three “chapters”—the first on March 5, the second on March 11, and the last on April 8. He has also collaborated with ex-Sub Pop labelmate Bria Salmena for his another album, “All I Can Say.”

Daniel has also lent his voice to albums by White Lung and Hunx and His Punx. He additionally has hosted an episode of the Netflix documentary series This Is Pop, and has signed with Sony Music as well.

In Jan 2019, Peck performed “Dead of Night” on Jimmy Kimmel Live. Months after in June 2019, Peck’s Pony made it to the initial longlist for the 2019 Polaris Music Prize.

The album additionally received a Juno Award nomination for Alternative Album of the Year at the Juno Awards of 2020. In April 2021, the Vocalist/guitarist was on American drag queen and singer Trixie Mattel’s EP, Full Coverage, Vol. 1.

Pitout has also appeared on the song “Jackson”, a duet cover of Johnny Cash and June Carter Cash.

In June 2021, Orville Peck would become the sixth artist on Lady Gaga’s album Born This Way The Tenth Anniversary, with him reimagining the song “Born This Way” in a country style.

Pitout has always been a supporter of AIDS awareness. Daniel once revealed he had lost friends and family to AIDS.

He has also used his musical networking abilities to help raise money for AIDS research. He additionally has a nonprofit organization, the AIDS Day Music Project, a non-profit organization promoting HIV/AIDS awareness through music and art.

The Toronto-based goth-country singer had launched the AIDS Day Music Project in 2012. Pitout also happens to be one of the few openly gay members in the DIY punk scene, and a very active, forward-thinking one at that.

Daniel also struggled with depression. In fact, he wrote his second studio album Bronco just around the time when he was recovering from a very, very deep depression. In March 2022, Pitout revealed during the creation of Bronco, that he was really unhappy.

He apparently was almost ready to stop making music altogether. He additionally was in the worst place, basically. But as soon as he decided to start writing Bronco, he felt incredibly cathartic, freeing, and “sort of like therapy.”