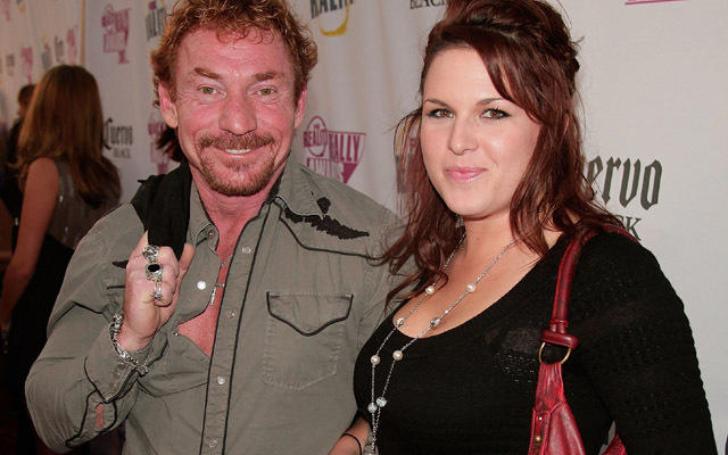 Amy Railsback is famous as the third wife of American actor Danny Bonaduce. Since tying the knot, the pair are enjoying a beautiful marital life without any problem. Unlike his previous two failed relationships, this one is in for a long haul.

We’re sure many of you are still curious to know how their unusual relationship came to be? And Do they share any children between them? If yes, then how many?

Find out all the answers and take a look at Amy’s early life and what she is doing these days.

Amy Railsback grew up in a small town in California.

She was born on July 8, 1982, in Sacramento, California, the US. As of 2022, she is 40-year-old. She belongs to the Caucasian ethnicity and comes of German ancestry.

Amy spent her early years in the city of Rocklin, CA, alongside her parents. She studied at a local high school in Rocklin. As for her further education, there is no further information. However, we do know that she used to be a teacher, so it is plausible she at least has a teaching license.

As of now, she lives with her husband Danny at their residences in Seattle and Los Angeles.

Not much is known about Amy’s previous career before she started dating Danny. What we know so far is that she was a substitute teacher when she first met The Partridge Family star. After she started dating him officially, she became his manager. In addition to that, she is also the treasurer and Vice President at Gravel Tones Productions. The company is focused on the Construction Sand and Gravel business and is based in Seattle, Washington.

Since then, Amy has been working in the same position. Aside from this, there is no info on her career. Most probably, she was working as a teacher for a long time before she linked with her husband.

Amy is happily married to actor Danny: A Glimpse into their imperfectly perfect relationship

Since 2010, Amy and Danny are bonded into marital bliss. Initially, their romance bloomed when they first crossed paths in a Starbucks restaurant in the Los Angeles area in 2007. Danny was living in LA due to his acting commitments while Amy was working as a teacher.

It was Amy who made the first move. Apparently, she complimented her future husband’s reality show, Breaking Bonaduce. The duo hit it off right there and then despite their substantial age gap. After dating for a year or so, Danny proposed to his girlfriend.

His girlfriend turned fiancee told US Weekly that she accepted his proposal after trying a couple of times. Yes, you read it right, the 61-year-old got down on his knees a few times before she eventually accepted.

He proposed a whole bunch of times over the last couple of years, but you know, it’s never quite official until you have a ring on your finger. I’m a little giddy about it.”

At first, he gave his wife relatively cheap pirate-themed jewelry. Even though Amy accepted the ring, she told him that he had to give her something fancy in the future.

Besides, the proposal came right after Danny divorced his second wife, Gretchen Hillmer (more on this later).

Amy Railsback married her boyfriend Danny in a beautiful ceremony

On November 6th, 2010, Amy and Danny exchanged vows in a private ceremony. The wedding took place at the Four Seasons, Maui, Hawaii. The pair was planning to marry for the past three years, and Danny had left the decision up to his fiancee Amy. When both of them enjoyed a romantic getaway in Hawaii, Amy decided to take the big step.

Soon, the hotel’s wedding planner called and asked to speak with Amy and told him that they are getting married. Danny recalled the startling moment and told PEOPLE, “I said, honey, you got something to tell me? Then I thought about it and said, This is a great idea!”

Talking about the matrimonial ceremony, it was beautiful. They said their “I dos” at the picturesque Plumeria Point. Only two people were in attendance, a wedding coordinator and a minister on hand. As for the wedding dress, Amy looked gorgeous in an off-white crochet dress, while her groom looked dapper in cream-colored slacks, a shirt, and a lie.

Right after the ceremony ended, the newlywed went for a walk on the beach. Afterward, they had a very exotic dinner.

As for the wedding ring, Danny did fulfill his promise of giving a fancier ring in the future. He gave her a $400k sterling silver diamond-crusted skull and crossbones ring. Apart from that, she also got a 1¼ carat white gold ring.

This was the first wedding for Amy and the third for her husband. Danny was first married to Setsuko Hattori from 1985 to 1988. After his divorce, he met his second wife, Gretchen Hillmer, whom he married on November 4th, 1990, the same day they met for the first time. They remained in a marital relationship for over 16-years before divorcing in 2007.

As of now, the duo is yet to become a parent. Regardless, Danny is already a father of two grown-up children, Countess Isabella Michaela, born November 23, 1994, and Count Dante Jean-Michel Valentino Bonaduce, born in 2001. Both of his kids are actors. While his 27-year-old is famous for her work in the movie, The Purest Blue, his son’s professional life has been kept behind closed doors.

When Danny and the mother of his two kids, Gretchen, divorced, they shared their children’s joint custody. Moreover, he also paid her $6,000 in child support and $10,000 in alimony.

How much is Amy Railsback’s net worth?

Amy currently manages her husband’s career and also serves as the treasurer of their gravel and stone business. From this, she earns a sizeable amount of money. Though her precise net worth is not calculated, we can say she lives a lavish life.

Her husband, on the other hand, has a total fortune of $5 million. Moreover, the former child actor owns a few houses around the United States. He has one residence in Philadelphia and one in Seattle.