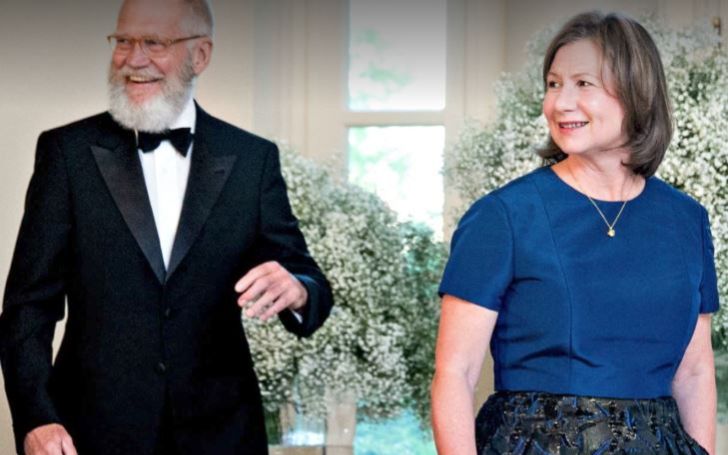 Regina Lasko is an ex-production manager, known for shows like Another World, Saturday Night Live, and Late Night with David Letterman, among others. She, however, is more recognizable as the wife of David Letterman, the host of The Late Night With David Letterman. Lasko’s husband, Letterman has been one of the pioneering faces in the late-night show spectrum. He is also known for hosting Netflix’s series, My Next Guest Needs No Introduction.

Their relationship took an unpleasant turn in the wake of Letterman’s confession to cheating on Lasko. Despite the infidelity, their marriage is still going on. Lasko and her multiple Emmy nominee-husband have remained together through rumors of divorce, kidnapping, and blackmail, among others.

Amidst all these, Regina ended up getting much attention and still is among the heed of the weeklies every now and then. Although even before the NBC host’s unfaithfulness, Lasko used to appear alongside her husband once in a blue moon, after the confession of the infidelity, she drifted herself to even more vagueness. Contrary to Letterman’s life which has been out in the open for decades, Lasko’s basics have always been hard to conclude. So, down lies the detailed wiki of Letterman’s longtime partner starting from where she was born to her son’s kidnapping.

Regina Lasko Is Ohio-Born; Her Father Was In The Army

Regina Lasko was born on November 20 in 1960, which makes her 62 years of age as of 2022. A native of Cleveland, Ohio, she is the daughter of father Edward Lasko and mother Mary Margaret Doyle.

Letterman’s wife Regina is yet to piece up the inside-out of the former’s parents. The Obits Cleveland, however, reports, that both Lasko’s father and mother were natives of Conneaut, Ohio. Regina’s father apparently was also a student at United States Army Officer Candidate School at Fort Sill, Oklahoma.

From there he was commissioned as Second Lieutenant in 1952. Lasko’s father, Edward served in Korea as a combat duty officer. Letterman’s father-in-law after the end of his service became an accountant. He also worked as personnel at the Astatic Corporation in Conneaut. The company was a maker of microphones and audio devices.

Lasko’s paternal grandfather was also a lighthouse keeper at the harbor during World War 2.

Regina Lasko Is An Ex-Student Of Northwestern

The Cleveland native, Lasko was a student at Northwestern University from where she graduated with a BA in Radio-TV-Film. She then earned her MBA from Case Western Reserve University.

How Did David Letterman And His Wife, Regina Lasko Meet Each Other?

When David met her, Regina Lasko was an equipment manager for the NHL team New York Rangers. It was the then-active sportscaster, Marv Albert who introduced Letterman to his now-wife, Regina.

They began dating in Feb 1986. Letterman once said for all the years Lasko and he have been together, the former has been supportive of him.

Letterman and Lasko were partners for 23 years before their wedding. While they started dating in the mid to late ’80s, they didn’t marry each other until 2009. Lasko and the observational comedian exchanged their vows at the Three-story Teton County Courthouse in the middle of Main Ave. in Chateau, Montana.

Regina Did Once Broke Up With Her Hubby Letterman

Lasko might not have ditched her marriage with Letterman even after the revelation of his cheating on her. The Northwestern graduate, however, had dumped him earlier in their relationship.

Regina allegedly had broken up with him briefly for the reason that the surreal humorist did not want to start a family with her. Though now with Letterman, Regina shares a son named Harry Joseph Letterman who the couple welcomed in 2003.

Before Lasko, Letterman was married to the head writer of his show, Merrill Markoe, and even before that, he was the husband of Michelle Cook. Cook and the ex-NBC/CBS host, Letterman married in mid-1968 in Indiana.

They had been together since college; the pair, however, would divorce in late 1977. After Cook, Letter started a relationship with ex-Late Night Head writer and producer, Merrill Markoe. In fact, Lasko and Letterman’s relationship started when Merrill and the Indiana-born ex-host were still partners. David and his second girlfriend, Merrill’s courtship lasted till 1988 after which Letterman continued dating his now spouse.

Regina Was A Production Manager At SNL; What Does She Do Now?

Well, Regina has more than a few credits behind the scenes in the show biz. Lasko is a production manager who also worked on Late Night with David Letterman.

She was on her husband’s flagship show doing the back work until 1989. The now 62 years old was The Late Show staff member throughout the time she met and dated the Sully actor. As per her husband, Lasko has a broad knowledge of broadcasting in and out.

In addition to her husband’s show, Regina also worked for the 1991 TV show, Another World. Loska also has worked for Saturday Night Live in 1989 again in regards to the behind-the-scenes doings.

According to the LALH Board Of Directors, the mother of one is now a treasurer at her husband’s show-producing company, Worldwide Pants, Inc. She in addition is a member of the board of trustees at the Collegiate School in Manhattan.

In 2005, a man named Kelly A Frank plotted to kidnap Regin and Lasko’s son, Harry Joseph. The ultimate plan apparently was to get $5 million as extortion money. Frank reportedly used to work as a painter on Lasko and her husband’s Montana Ranch.

The kidnapper, however, could not succeed. Instead, the police detained him and later he received ten years of jail time after the trial. Frank then broke out of prison in 2007 and after getting arrested again faced additional 10 years.

Letterman’s affair came out a mere six months after Letterman and Lasko’s marriage. The one-time Simpsons voice actor reportedly had been committing adultery with several of his female employees.

David apparently decided to come clean about his affair after someone threatened to expose him. So, in Oct 2009, the Emmy winner confessed he was indeed unfaithful to his longtime partner. Addressing his infidelity on his own show, Letterman said,

“My response to that [allegation] is. ‘Yes I have.’ Would it be embarrassing if it were made public? Perhaps it would.”

Letterman cheated on Lasko with several of his female co-workers. But among them, the famous name was that of Stephanie Birkitt, his ex-PA. As per sources, the threat to the Kennedy Centers Honoree reportedly came from the producer of CBS’ 48 Hours, Joe Halderman. Apparently, producer, Halderman at the time was dating Birkitt.

As per Halderman, Birkitt and Letterman’s liaison began in Dec 2007.

Letterman, too, has said the Ohio-born did experience a horrible heartbreak upon knowing her husband’s faithlessness. In fact, the still Mrs. Letterman even stopped appearing alongside her spouse at public events.

While Lasko didn’t initiate any divorce with Letterman choosing to remain with him, the ED alum, on the other hand, has said numerous times that he might not be able to forgive himself ever.

Three years after Letterman affirmed his cheating scandal, the Spin City actress in an interview said he was still trying to build up the trust between him and his wife. He added there was no one else to blame but only him.

The American Comedy Awards winner has often implied he may be on the path of trying to forgive himself forever.

“I’m still trying to fix it. It hasn’t gone away. It will never go away.”

“No, I don’t have that luxury. I can’t forgive that behavior.”

Of his cheating, he likewise added,

The host for over 6000 late-show stated since getting free of the secret, his life, nevertheless, has been fun and full of joy.

Lasko’s Husband Is A Super Millionaire; What Is Regina’s Net Worth?

For someone who ran arguably the most-celebrated late-night talk show, Regina’s husband, Letterman is the richest host in such genre. The now 75 years old show producer has an estimated net worth some hundred million dollars shy of half a billion dollars.

Throughout his career as the host of the late-night show, Lasko’s spouse saw salaries ranging from $ 7 million to as high as $ 14 million a year. The ex-Oscar host’s wealth also includes his several properties each worth no less than ten figures or so. Not to mention, he is also the owner of Worldwide Pants which has produced modern successful talk shows like The Late Late Show in addition to several prime-time comedies including Everybody Loves Raymond.

Having discussed the aforementioned numbers and considering Lasko’s low-key profile exactly converse to her husband, it seems far-fetched that Regina is as rich as her partner even by far and wide. It nonetheless, very well could be the case where the Ohio native has a net worth at least in the ballpark of six figures give or take.