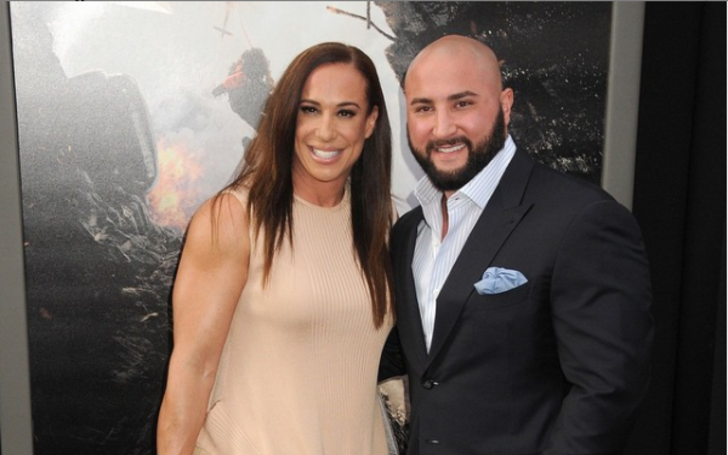 Dave Rienzi is a sought-after personal trainer in the field of bodybuilding, nutrition, and physical rehabilitation, all thanks to both his academic and practical knowledge. He also happens to be the husband of Dwayne Johnson’s ex-wife, Dany Gracia.

Dwayne Johnson’s physique is one to die for and as apparent from his social media; it is the result of utmost perseverance and discipline. What often gets shadowed is the team that more or less has quite the contribution and assists in helping the former WWE star achieve that sturdy musculature. And one such name from the group is Dave Rienzi.

So how come the relationship between the Rock and Rienzi is as smooth as it seems? Also how long has the duo been working together? Know all these along with all the facts related to Dave Rienzi in the article below.

Dave Rienzi was born on April 25, 1984. He started weight training at the age of 12, with an old weightlifting set that his dad had in the basement, he said in an interview with muscle and fitness.

He mentioned how he loved the discipline of working out, the mental fortitude, and the reward of getting stronger and gaining muscle. From there, he decided to turn fitness into a career.

After college, he spent several years working in the fitness industry where he really began to hone his craft. Rienzi said he was fortunate enough to open his own private strength and conditioning gym in 2014.

Dave Rienzi Is a Fitness Instructor And Nutritionist

Dave graduated from Indiana University with a degree in B.S Kinesiology/Fitness Specialist.

Rienzi holds a Health Fitness Specialist certification from the American College of Sports Medicine. In addition to that, he is a Certified Personal Trainer with knowledge of nutrition and dietary plans.

Further, he is a National Physique Committee competitive bodybuilder. He scored level 1 certification in Reflexive Performance Reset.  In 2011, Dave competed at the NPC South Eastern US Championships, where he got fourth place and then finished third at the IFBB North Americans bodybuilding competition.

Rienzi last competed in 2014 at the NPC Nationals and took 4th place in the Heavyweight class. He returned to competition in 2020, after which he achieved IFBB pro status, following some significant surgeries of his own. He went through two rotator cuff and two knee operations.

He Has Been Dwayne Johnson’s Trainer For A Decade; How The Two Met

The two have been together since The Rock’s professional wrestling days.

Rienzi met DJ back when he was dating the actor’s former partner Dany. She was overseeing his professional career whilst building out his business interests. Dany was seeking someone to assist Johnson, with a deep understanding of the body and proper biomechanics.

Dave remembered there was also the need for professional expertise to oversee the Rock’s nutritional needs and the development of training programs that could complement his taxing shooting schedule. Additionally, he needed rehabilitative support for his numerous injuries from football and wrestling.

One of the first projects he and Johnson worked on was in the 2013 film “Pain & Gain.” The following year, Rienzi again assisted the Rock for “Hercules.” To prepare for the role, the specialist and Dwayne embarked on a grueling training routine for eight months, to allow the actor to transform into the titular character.

Dave Rienzi Is Also A Business Partner With Dwayne Johnson

The personal trainer of Dwayne, Dave is the owner of Rienzi Strength And Conditioning. His training facility lies in Sunrise, Florida.

Rienzi Strength provides its members with state-of-the-art equipment, including Hammer Strength, Hoist, Star Trac, Freemotion, Precor, Cybex, and Tuff Stuff, as well as a dumbbell selection ranging from 5 to 200 lbs.

Additionally, the bodybuilder is the co-owner of ZOA, a healthy-energy drink that he launched with the man, himself, Dwayne Johnson, John Schulman, and his spouse, Dany Garcia. Talking about the business, he said he and his partners, wanted a clean energy drink with natural caffeine and B vitamins, that was free of sugar.

So, they created ZOA to be the “anytime” energy drink which he claims is actually for everyone. Dave asserted his drinks consist of 100% DV vitamin C, 250mg of BCAAs, potassium, and magnesium.

Rienzi married Dany Garcia on 29 March 2014 in Orlando, Florida. By that time the latter had parted ways with Dwayne for about six years. The Garcia Companies and TGC Management chairwoman met her future husband, Rienzi, during Rock’s fitness routines. The time was around 2010.

Dave Rienzi and his life partner, Garcia split their time between Miami and Los Angeles.

Despite marrying his ex, Dwayne has a sound relationship with Dave as well as his former wife, Dany. The Rock considers Rienzi a good friend and they even celebrate numerous occasions together.

As mentioned, Dany’s present husband is Johnson’s trainer. And while not necessarily wrong, it might be still weird for most people to work with their ex and their new partners.

But the trio of Dwayne, Rienzi, and Garcia couldn’t have been cooler in this situation.

In an interview, Dave’s better half, Garcia opened up on their very rare relationship. She said she understands the rarity of having to work with your ex.

She, however, stated Dwayne and she — have the support of their spouses. Garcia explained Mrs. [Lauren] Hashian Johnson, Dwayne’s spouse, is amazing and so is her husband.

The former Mrs. Johnson maintained Dave and Dwayne have been so close. She also mentioned how her husband has been Dwayne’s strength and conditioning coach for so long. She concluded Dave, DJ, Lauren, and she, herself are close and that they each have an incredible amount of respect for the other.

Garcia also shared Rienzi was never perturbed by who was her former husband; that has meant nothing to him.

Dave and His Wife, Dany Are Both Into Body Building

Dany and her husband, Rienzi share a common passion for bodybuilding. They have been to such competition on several occasions. In fact, Dany apart from being a founder of ‘Garcia Companies’ was a former professional bodybuilder. The couple works out together as well.

In fact, it was Dave who encouraged her to get into bodybuilding. Garcia remembered the time when her husband had told her about a division in women’s bodybuilding. She said she, at first, found it unattractive, the size of the women’s open.

Garcia added that was the entire conversation and the motivation.

They were also on the Judges’ panel at 2017 Mr. Olympia LLC.

At her first nationwide competition, Garcia finished 7th out of 42 women. In 2014, she clinched her pro card with the International Federation of Bodybuilding and Health And Fitness (IFBB),

His Wife Is A Successful Businesswoman

Apart from being a bodybuilder and her business partner, she owns several lines of ventures to her name.

During her early career, Dany began working in the financial industry and increased via the ranks to VP at Merrill Lynch, along with an exec at Pierce, Fenner & Smith.

She was also influential in helping her first husband get into a wrestling career. Garcia spoke with the WWE leadership and directors and helped seal offers that would help transform The Rock into among the unforgettable faces of the WWE franchise business.

After leaving Merrill Lynch, Dany became The Rock’s full-time manager and subsequently set up Garcia Firms. She is also the creator of TGC Administration, which is just one of the essential subsidiaries of Garcia Firms.

In 2012, Garcia launched a production business named, 7 Bucks Productions with her ex, Johnson. The business has created several box office movies. Some of them are Baywatch, Jumanji, Hobbs & Shaw, Skyscraper, HBO TV collection, Ballers, among others.

Dave’s partner is also the co-owner of XFL, a specialist Football organization. With this, The Rock’s ex-wife became the first female proprietor of a professional sports league.