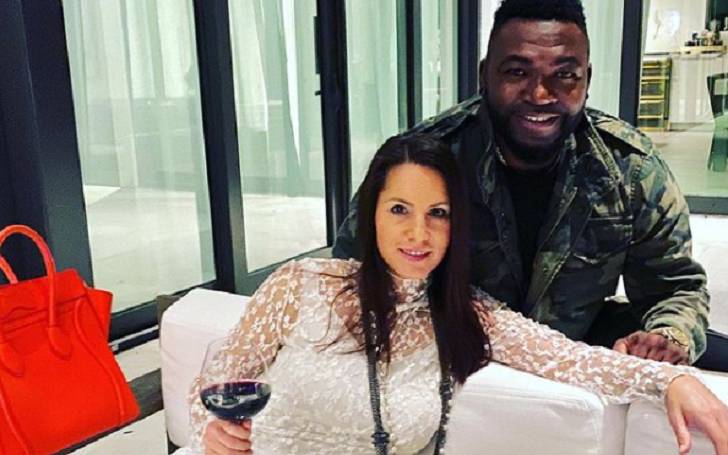 David Ortiz who has nicknamed “Big Papi” is one of the most powerful sluggers in baseball history. He became a ten-time All-Star and a three-time World Series champion throughout his rise to MLB stardom. He played for a couple of baseball teams before the future star signed with the Red Sox in 2003, the club where David has spent the remainder of his baseball career.

In addition to his prolific career, the MLB legend is also quite successful in his married life. David and his wife Tiffany Ortiz, who have been together for decades have yet to show any signs of slowing down.

Besides, in the past, the adorable couple also encountered some dreadful incidents including David’s shooting and a few others. But their support for each other and the way they dealt with the situation have kept them alive in their enduring love life. In the following article, let us try to explore more about their married life, children, and other aspects of their private life!

The couple tied the knot back in 2002, in a low-key wedding ceremony in front of their family members and friends. They dated for several years before they exchanged their vows. David while playing for the Class A Wisconsin Timber Rattlers in 1996 met his future spouse Tiffany. The duo soon hit it off.

His wife Tiffany is from Wisconsin, a town in between the cities of Green Bay and Appleton. Besides, Ortiz considered Green Bay as his adopted home.

A year after they started their lovey-dovey, Otiz began playing for Minnesota Twins and left the team in 2002, the same year David married Tiffany.

How Many Kids Does David Ortiz Have With Tiffany?

The duo whose relationship has spanned over two and a half decades is blessed with two children. The two welcomed their child, a daughter named Alexandria in 2001. Their second child, a son D’Angelo Ortiz was born in 2004.

Besides, Ortz has a daughter named Jessica from his past relationship. Although most of her information is still hidden from the media including who is her biological mother, Jessica completed her graduation from high school in the Dominican Republic.

His Son Has a Burgeoning Baseball Career

Being the son of a living legend David who is beloved even by most casual baseball followers, D’Angelo was always destined to be a baseball player too. He confirmed MLB,

Besides, David’s daughter Alex surprised him after the then-15-year-old girl sang the national anthem before the 2016 Red Sox home opener on April 11, 2016.

The slugger described an unforgettable event,

“It was a surprise, a beautiful surprise. At some point, you start thinking about your kids and the way you raise your kids and everything that you’ve been through. I got caught into those memories, and it was beautiful.”

Alex who graduated from high school in 2019 now studies at Berklee College of Music in Boston.

The Couple Once Separated: How Things Worked Out?

Although their relationship has spanned several years now, it once hit a rough patch. David and his life partner Tiffany decided to call it quits after over a decade of their marriage in 2013. Amidst their divorce rumors, David said,

“There are some situations in life that work out for a period of time and at some point, they don’t work out anymore and you have to move on. I’m moving on. She’s moving on. Hopefully, everybody respects that.”

The former player asked for his family’s privacy. He also revealed their separation was amicable.

But a year after their split, the two reconciled. David Ortiz’s wife Tiffany said they were back together because they were still in a deep relationship with each other. And as of now, things seem to be going fine between the two.

Back in June 2019, David was shot in the back at a Santo Domingo bar in his hometown of Santo Domingo. The bullet went straight through his abdomen, heavily damaging his liver and intestines.

Miraculously, a few individuals including Eliezer Salvador, the owner of the Presidente Sports played a heroic role in saving the former Red Sox slugger’s life by rushing him to the nearby hospital the Abel González Clinic. There, Ortiz underwent six hours of surgery. He was later transported to Massachusetts General Hospital, where the MLB star underwent a couple of surgeries.

In the meantime, David’s spouse released a statement, thanking Salvador who took her hubby to the hospital after the shooting. She said,

“I want to take this opportunity to offer our heartfelt thanks and gratitude to Eliezer Salvador, owner of Presidente Sports, for your quick thinking and swift action on Sunday night.”

“Your heroism and selflessness were the first steps to ensuring David could get the urgent care he required. For that, we are eternally grateful.”

Furthermore, Tiffany also expressed appreciation to the surgeons at the Abel Gonzalez Clinic after they did a successful operation.

Also Read: Inside The Life of MLB Host Lauren Gardner

Who is Tiffany Ortiz? Know Something About Her

David Ortiz’s spouse Tiffany, a native of Kaukauna, Wisconsin is an ardent supporter of Green Bay. The celebrity spouse is also passionate about the charity work who co-founded the David Ortiz Childre’s Fund in 2007 along with her hubby. Furthermore, Tiffany is on the Boston Board for UNICEF.