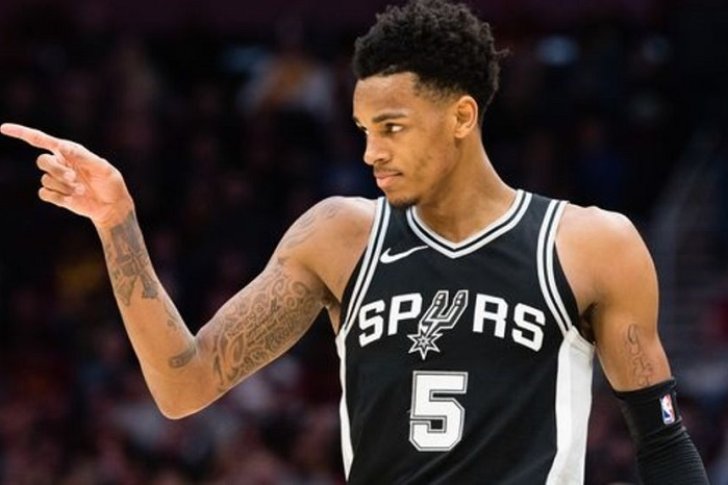 Dejounte Murray, 24, is one of the most admired and powerful young basketball players in the NBA. He currently plays point guard for the San Antonio Spurs. Murray, prior to his flourishing NBA career, has also been on the news for his romance with Instagram stars and sometimes with IG Models.

At the moment, sources suggest Murray is dating the social media star, Jania Meshell after his messy breakup with his former girlfriend Jilly Anais.

Murray is also a doting father to a daughter. Let’s dig out a little bit more about his interesting love life and other facts you are looking for.

Initially, Murray and his alleged girlfriend Jania Meshell kept everything about their reported love life quite a secret. But, Judging by their frequent joint appearance, it was quite obvious that the two were pretty much into with each other.

Their dating rumors first sparked after their frequent appearance back in 2019. Sources claimed the two also spent time together in Miami in early 2020. Although they both did not share any snaps on their social media, Meshell’s live stream from the boat was quite obvious they had a good time together there.

“Son healthy, My man the best and I’m blessed. Why must I embarrass myself on here fw these clown as mad hoes.”

So, it all hinted that the duo was items at some times although they never tried to make it public.

Besides, Meshell has a daughter from her previous relationship with NBA Youngboy. Her ex-boyfriend is a rapper.

On 3rd Dec 2019, Jania Meshell came with a new video titled ‘I HAVE A SECRET TATTOO’ on her self-titled YouTube channel. The YouTuber didn’t disclose a single sign of her new tat on the video though. Jania has reportedly inscribed the name of Dejounte on her newly inked tattoo.

Meshell completely blurs it out but the art’s last three latter features ‘nte’. This led to the speculations it may be the first name of Dejounte. Well, it’s all speculation until she herself shows it.

Dejounte is a Doting Father to a Daughter

Murray has a daughter named Riley, born on 31st July 2017. The San Antonio Spurs’ Murray introduced his daughter on the occasion of her first birthday with a touching Instagram post.

Murray also revealed the custody battle of his daughter in the caption.

I Ain’t Hiding My Daughter From The World, I Was Hiding The World From My Daughter. I Just Want To Show Off My Beautiful Princess And Show How Thankful I Am For Her. Through All The Court Battles, Headaches And Non sense daddy has to go through just to see you is insane, but daddy is going to fight and fight and be the best father ever to you and make sure you never want for anything baby girl. Thanks to my support system, My Lawyers And Family have been playing a big role in keeping me focused and just supporting me!! 💯😘😍❤️💞 #Happy1stBirthdayRiley 💞 #RLM 💝

But, Murray has never revealed the name of his daughter’s biological mother.

Dejounte had a messy break-up with Girlfriend Jilly Anais: Called her a “gold digger”

The NBA started dating his now ex-girlfriend Jilly Anais, a model in 2017.  But, their relationship ended very poorly just after a year of their romance.

They officially split in October 2018. It was really messy broke up as Murray publically called Jilly a “gold digger”. She quickly responded to his post tweeting,

Note to self: When the Lord Gives your a sing, stop ignoring that mf

Just pure ignorance.. I hate that I even have to entertain such stupidity, but when a little boy wants to speak falsely of my character that’s another story.

As of 2020, Jilly Anais is romantically linked to her new boyfriend Deshaun Watson, a Houston Texans quarterback. They are together since Sep 2019.

Who is Jania Meshell? Details on Her Son, Tattoos & Plastic Surgery

Jania Meshell Boyfriends, Career, & Tattoos: Every Fact You Are Looking For