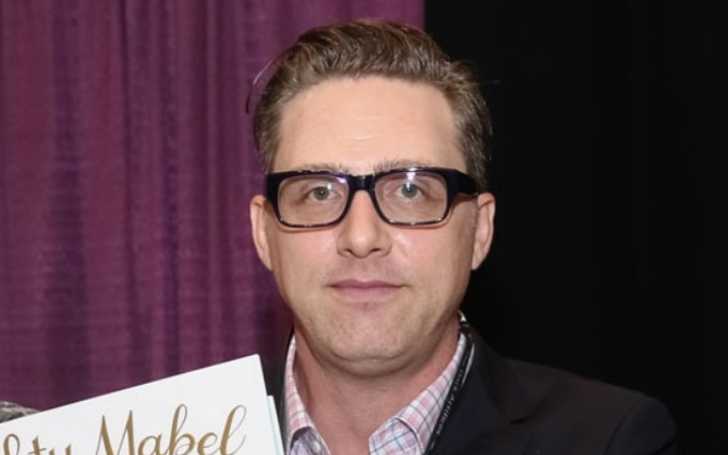 Devlin Elliott is an American theatrical producer. He is popular as a co-owner of Maberry Theatricals Inc. and an author of his Children’s Picture Book series Naughty Mabel.

Despite his own professional success, Elliott is widely popular for his gay relationship with his husband Nathan Lane. His husband is an American movie and stage actor who received a Primetime Emmy Award for his role as Teddy Dimas in the series Only Murders in the Building.

As of now, the couple has been gaining huge media attention because of their relationship. Continue reading the article and know when and how they start dating. Also find out about their wedding, kids, career success, and many more. Stay tuned with us and explore more about Nathan Lane’s spouse Devlin Elliott.

Devlin holds an American nationality and as far as his ethnicity is concerned, he belongs to the Caucasian white ethnicity. He was raised in his birthplace with his family; however, no details regarding his parents and siblings are available at the moment.

What Does Devlin Elliott Do For Living?

As mentioned above, Devlin is an award-winning writer and producer. He has been acting in the entertainment field since 2001. During his struggling days, he started his career as an actor playing the role of a pizza delivery man on the show The X-Files.

The 50-year-old had an uncredited role in the television series Sabrina the Teenage Witch (2001). Additionally, his other contribution to the industry includes The View, Working in the Theatre, Frasier, and Sweet Union.

As a producer, he first worked in Westside Theater’s play titled White Rabbit Red Rabbit (Mar 2016 – Nov 2016). He along with  Tom Kirdahy owns Maberry Theatricals Inc. It’s been over 16 years that he has been serving as a Broadway Producer in the firm.

Besides that, Devlin Elliott is also a popular writer. Since May 2014, he is working as an author of his Children’s Picture Book series Naughty Mabel.

Devlin Elliott Is Married To His Husband Nathan Lane Been

It’s been almost 25 years that Devlin and Nathan have been together. It is still a mystery how the couple meet but they reportedly started dating in the year 1997.

The couple kept their affair private for 18 years and almost after two decades, they decided to level up their relationship. Finally, Devin married his long-time partner on November 17, 2015.

Talking about their wedding, it was a private ceremony at New York City’s City Hall. The duo exchanged vows in the presence of their family and close friends and even had a small party afterward.

After their nuptials, the pair made their appearance as spouses at Nathan Lane in Conversation With Joy Behar event. Elliott’s husband Lane was spotted flaunting his gold wedding band whereas the former was standing by his side with his hand in his pocket.

Tony Award nominee writer Elliott and his husband Nathan do not share any child together. But they own a pet French bulldog named Mabel which they adopted in the year 2006.

Even the couple’s book titled Naughty Mabel is based on their daughter who was 9 at the time of its release. Talking about their French bulldog pet, Devlin said:

“She’s become our version of a child .. really all she wants is for you to pick her up and hold her like a baby.”

“She’s a little neurotic and needy at times. It’s like living with a supermodel. And now that she’s become a celebrity, you know, it s very difficult.”

Professional since 1975, Lane has starred in almost 90 movies and television series. He made his breakthrough with the 1996 film The Birdcage. He portrayed the role of Albert Goldman alongside Robin Williams, Gene Hackman, and Dianne Wiest.

The movie was successfully hit earning $185.3 million at the box office under a budget of $31 million. His other notable acting credits include The Lion King, Mousehunt, The Producers, and Only Murders in the Building.

The theatrical producer has amassed a huge sum with his flourishing career. Devlin Elliott reportedly owns a net worth of $20 million as of 2022.

On the other hand, his star husband Nathan Lane has a fortune of $20 million, according to Celebrity Net Worth. Back in 2005, he earned $5.2 million as a yearly salary from the Broadway play, The Odd Couple which was $100,000 per week. Likewise, in Broadway’s The Producers he received a weekly salary of $100,000 as Max Bialystock.

The celebrity spouse Elliott prefers living a low-key life. He is only available on platforms like Twitter and LinkedIn. Currently, he runs a Twitter account under the name @devlindelliott with 255 followers. Similarly, his LinkedIn profile has 412 connections.

Is Jenna Ortega Related To Nicki Minaj? The Truth Here