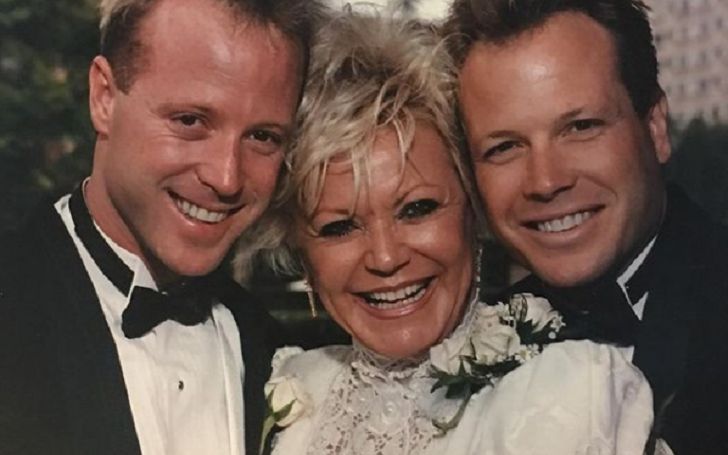 Dianne Holechek has been into the light as an ex-wife of one of the legendary action heroes, Chuck Norris. The couple got married when Norris was still in the U.S. Air Force and they were in a marital relationship for thirty years before their separation. Besides, the former flames shared two children from their relationship and both of them are quite successful in their respective fields as well.

Talking about Dianne’s professional career, the ex-celebrity spouse was previously the owner of the restaurant but has remained low-profile about her professional endeavors after her divorce from Chuck. So, let’s find out what Dianne is doing in 2022?

Take a closer look at things you didn’t know about Dianne!

How old is Dianne Holechek? Her Early Life and Ethnicity

Diane who was born Dianne Kay Holechek is aged 80 as of 2022. She was born on November 27, 1941, in Los Angeles, California. For her early life, she spent most parts of her childhood in her hometown of LA along with her family. However, most of her early details still remain behind closed doors.

In addition, as far as her ethnicity is concerned, Holechek is Caucasian and is an American as per her nationality.

The couple came across when they both were students at North High School in Torrance, California. At the time, Norris was heavily involved in football and gymnastics, while, his future wife was a normal student.

The martial artist graduated from the school in 1958. The same year, Chuck was enlisted into the United States Air Force as an Air Policeman and also proposed to his then-girlfriend sending her a letter.

After their engagement, the duo didn’t waste any time to take their relationship to the next level. And they exchanged their vows on 29th December of the year. According to sources, Norris tied the knot with his first wife, wearing his Air Force uniform in a traditional wedding ceremony. Holechek was 17 while her then-husband was 18 at the time of their nuptials.

They celebrated their honeymoon, spending four romantic days together. Dianne and her spouse Chuck led a blissful matrimonial relationship for around thirty years before they went their separate ways in 1988. Their divorce came to an end in the following year.

How did their relationship dissolve? Chuck Norris Cheating Scandal

At the time of their break-up, the exes were silent about their failed marriage. And the reason behind why the duo split never made it to the media.

But, back in the days, when Dianne was still married to Norris, the action hero was involved in an extra-marital relationship with a mysterious woman named Johanna. As per Contract Music, Chuck was stationed in California in the US Air Force at the time of his romance with Johanna. He said the tabloid that he cheated on his first wife,

“I never told Johanna that I was married.”

Norris and Johanna also had a daughter, Dina, born in 1963. Their girl didn’t know that Norris is her biological father for years. But, the truth couldn’t be far from her for long and Dina claimed that Chuck is her natural father in 1991.

As soon as Dina got in touch with him, her dad agreed to meet her and her mom. He also didn’t need any paternity test to confirm if Dina is his own daughter or not. He said,

Chuck Norris’ first wife Holechek gave birth to their first child, a son named Mike Norris on 4th October 1962, in Redondo Beach, California. The duo became parents for the second time when their son Eric Norris was born on 20th May 1965.

Both the Norris brothers have built highly-successful paths in their own fields. Their oldest son Mike has followed his father’s career path. He kicked off his acting career with a role, playing with his father in the movie A Force of One in 1979. He gradually became part of many successful movies such as Delta Force 3: The Killing Game, Walker, Texas Ranger: Trial by Fire, and more.

On the other hand, Holechek’s second son Eric is a successful stock car racing driver who was also the NASCAR Winston West Series Champion in 2002.

Besides, Eric has also tried his hands in the field of directing, making his directorial debut on Michael Preece‘s TV film Logan’s War: Bound by Honor. Moreover, the 57-year-old also landed the same role in the TV series Walker, Texas Ranger, starring his father.

Holechek is also the Grandmother of Seven Grandchildren

Dianne became the grandmother for the first time when her oldest son, Mike welcomed a daughter, Hannah with his wife Valerie in 1995. She has six more grandchildren; twins Max and Greta from Mike and four grandchildren, Camryn, Chloe, Chantz, Cash from her younger child Eric’s marriage to Stephanie.

What does Dianne Holechek do at present?

After her divorce from Norris, Dianne has kept both her professional and personal life out of the spotlight. She is neither active on any kind of social media handles. So, there are no more latest updates about Holecheck’s life.

But, going through her children’s social media posts, it seems that Dianne is enjoying her full time with her kids and grandchildren.

She Was in Restuarant Business

Looking back to her career, once, Chuck Norris’ first wife Dianne Holechek owned a restaurant in Newport Beach. Later on, she sold it at a considerable profit and embarked on the music business. She produced records in Toluca Lake.

Besides, Dianne had a small role in a mini TV series Hollywood ’84.

Dianne has a $1 million net worth. In the meantime, her ex-hubby Chuck’s estimated fortune stands at $70 million as of 2022. He has racked such a tremendous amount of wealth from his diverse career as an actor, film producer, and screenwriter in the entertainment world.

Over the course of his distinguished career that has spent over a half-century, the actor has worked in a number of hard-hitting action movies that include Breaker! Breaker!, A Force of One, and more.