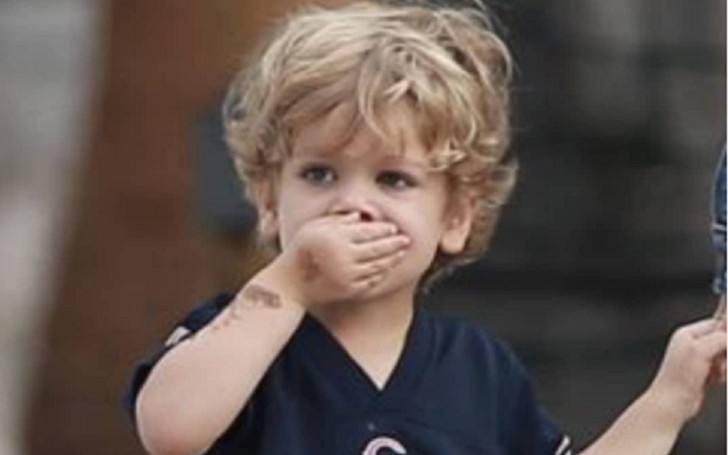 Dimitri Portwood Kutcher is the son of Ashton Kutcher and Mila Kunis. Both of his parents are super successful in their own way. While Dimitri’s father is a model and actor with several acting credits, his mother has also made quite a name in the entertainment world as an actress.

Well, having such A-lister parents really perked Dimitri up. But, in the meantime, like many celebrity couples, Dimitri’s parents are also super strict when it comes to the privacy of their children.

So, in this article, we’re going to find out all the info on Ashton Kutcher’s son including his birth details, current whereabouts, and more intriguing facts. Let’s take a closer look!

When Was Dimitri Portwood Kutcher Born? His Birth Details

He was born at Cedars-Sinai Medical Center in Los Angeles, California, on 30th November 2016. To be more precise, Dimitri was born at 1:21 a.m. and weighed 8 pounds, 15 oz. at the time of his birth, according to a statement posted on Kutcher’s website A Plus.

For the baby’s pregnancy, Kutcher’s rep confirmed the exciting news of their second child to People magazine in June 2016. And in October of the same year, Kutcher disclosed the sex of their baby while on the “Today Show.”

As of 2022, Dimitri’s age is 5, and will celebrate his 6th birthday in coming November.

For his parents, the main interesting part of his birth was picking his name up. Dimitri Portwood Kutcher’s father Ashton initially wanted to name his new baby boy, “Hawkeye” after the mascot of his alma mater, the University of Iowa. However, the moniker the actor had chosen for his son was ultimately shut down by his wife Kunis. Later on, Kunis decided to name their baby, “Dimitri,” which both of them also liked very much.

As for the meaning behind his first name Dimitri, it is a name of Russian origin meaning “follower of Demeter.” While his first moniker represents his mother’s Russian heritage, his middle name “Portwood” was taken in the honor of his father Ashton’s stepdad Mark Portwood.

His Nationality and Ethnicity

As far as his nationality is concerned, Dimitri is an American. He belongs to Ukrainian and Russian heritage from his mother’s side and is of Czech, German, and Irish descent from his father. Furthermore, his ethnicity is mixed.

Who is Dimitri Portwood Kutcher?

As we have mentioned above that Dimitri is a famed star kid. He got huge media exposure as the son of two power couples Ashton Kutcher and his wife Mila Kunis.

His mom who came from Chernivtsi, Ukrainian SSR began her acting career with a minor role in the daytime soap opera broadcast Days of Our Lives in 1994. And the actress made her major breakthrough following her breakout role in the movie Forgetting Sarah Marshall. She has since been unstoppable and has already featured in numerous movies. She even got the Golden Globe Award nomination for her work in the psychological thriller Black Swan (2010).

Similarly, Dimitri’s father Ashton, a Cedar Rapids, Iowa native is also quite successful in his own career path. Aside from his work as an actor and model, Kutcher has also tried his hands in the world of business. In fact, Dimitri’s dad is a venture capitalist and co-founder of A-Grade Investments, the venture capital firm.

Are His Parents Still Married?

Dimitri Portwood Kutcher’s parents Ashton and Mila married in July 2015. The two organized their wedding ceremony at The Secret Garden at Parrish Ranch in Oak Glen, California. Talking about their first meeting, the two met while both of them played love interests on the Fox sitcom. But, they wouldn’t start dating until 2012.

In Feb 2014, Ashton proposed to his girlfriend and they exchanged their vows the following year. Since then, they are leading a happy matrimonial life.

In the past, Dimitri’s dad Kutcher was married to an actress Demi Moore from 2005 to 2012. On the other hand, his mother was also in a relationship with Macaulay Culkin. Once, the two were even rumored to be married.

He Has an Older Sister

Dimitri is now spending his wonderful childhood days with his sister named Wyatt Isabelle, born in October 2014. Both of them are incredibly close to each other. Back in 2017, the doting mother adorably said on The Ellen DeGeneres Show that Wyatt is a loving sister to her brother,

“Wyatt thinks [Dimitri] is her baby, and at some point, I’m going to have to explain to her it’s not really her baby. I don’t know how I’m going to do that. She loves the baby so much … maybe more than me.”

Although Dimitri is a famed star kid, his parents have kept him and his sister strictly out of media exposure. Over the years, their public appearances have been few and far between. Additionally, both of Dimitri’s parents also don’t allow media outlets to publish their kids’ pictures without their permission, even though they were caused by the paparazzi a few times during their family outings.

Soon after the birth of Dimitri, Kutcher once told A Plus,

“We’d like to allow our kids to make their own choices on whether to have a life in the public eye or not. We don’t want to make the choice for them.”

Dimitri is now only 5-year-old. Although it is yet to be confirmed where Dimitri exactly goes to school, his parents talked a few times about their desire to school their kids. Meanwhile, their parents have a different point of view on where to send their children to school.

On one hand, their mother Kunis wants them to go to public school, and on the other hand, their father Kutcher doesn’t seem to be agreed with her choice. Although Ashton himself is the product of the public school, the actor doesn’t think that government schools can provide proper STEM education. This is why The Butterfly Effect star wants his kids to be homeschooled.

Where Does Dimitri Portwood Kutcher Live? Details on His Parents’ Net Worth

He currently resides in the Beverly Hills Post Office area with his parents and sister. In fact, Dimitri spent the first few years of his childhood in his parents’ now-sold house located in Beverly Hills, Los Angeles.

Besides, his father Ashton has an estimated net worth of $200 million, whereas, his mother Mila has a fortune of $75 million.