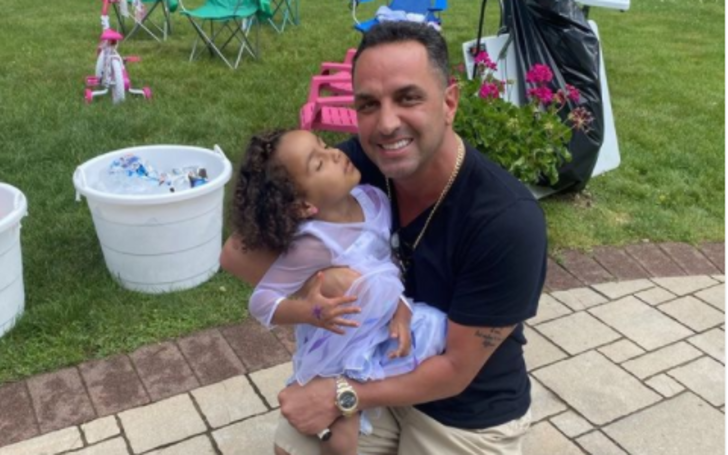 Dino Guilmette aka Joseph Lizzi is a former boxer erstwhile famous for his relationship with Shayana Jenkins. She rose to prominence for being the ex-girlfriend of a former New England tight ends and a convicted murderer, Aaron Hernandez.

For a while, Shayanna was the focus of media owing to her ex-fiance’s debacle. The world developed sympathy for her and wished her well. She eventually moved on and even started a family with her new partner.

Dino Guilmette welcomed and supported Shayanna and his daughter through all that she was enduring. Know all about Jenkins’s second partner, Guilmette in the content below.

Guilmette was born in Long Island, New York in November 1978. People often refer to him as someone who had trained in boxing but never had a match in any seriousness.

On his LinkedIn page, Guilmette has described himself as self-employed. Lizzi holds Masters of Business Administration in Finance from the University of Rhode Island Feinstein Providence Campus (graduated 2000). The page also says Guilmette lives in Cranston, Rhode Island.

Dino tried to make it as a model with One Model Place. This was sometime during 2002 and 2003.

His profile further states that he was interested in, “Fashion / Editorial, Runway, Sport, Casual, Swimwear, Print.”

As of the present, he is believed to be running a bar.

Online documents read Guilmette at 18, was arrested for felony assault, and had received one year of probation. A few months earlier, Guilmette had allegedly destroyed property, though the authority later dismissed the case. The former wanna-be model also had charges of wilful trespass in January 2005 and simple assault in October 2005. For the assault charges, Guilmette was once again sentenced to one year of probation.

Guilmette met Jenkins through mutual friends. The unofficial boxer said he and Jenkins just hit it off from the beginning. They started dating sometime in 2017.

Together, they are parents to three daughters, Mia, Avielle, and Giselle. After the birth of their youngest child, Giselle, Guilmette, and Jenkins announced their engagement.

He Played College Football With His Girlfriend’s Ex

While Guilmette met Jenkins through mutual friends, there’s another link that connects them both together — and it’s none other than the notorious ex-footballer, Aaron, himself. Apparently, Hernandez and Guilmette played football back at the University of Florida.

There were/are a lot of rumors and theories on how Guilmette was not the biological father of Shayanna’s youngest daughter, Giselle. Despite the ugly controversies surrounding Shayanna’s pregnancy, including people claiming how Aaron was the real dad, Guilmette chose to stand by her.

“There are a lot of ugly comments out there. I don’t listen to them. I tune them out anyway,”

There had been hearsay that people smuggled Aaron Hernandez’s sperm out of prison prior to his suicide in April 2017. Jenkins’ ex was serving life in prison without the possibility of parole for the murder of former friend Odin Lloyd. Just before killing himself, Hernandez was the prime suspect of a double murder of Daniel de Abreu and Safiro Furtado. Though the court later ruled he was innocent in the killings of Abreu and Furtado.

A former college teammate of Hernandez’s remained positive towards the fact that the baby did not belong to the ex-Patriots player. Later, Dino, himself confirmed with Radar Online that the child was indeed his.

Guilmette’s Family Was Hopeful; They Thought Shayanna Was Perfect For Him

While there’s still that uncertainty about whether their beautiful relationship will culminate into romance, Dino’s father, Bill Guilmette believes that Shayanna could make his son really happy. In an interview, the father said Shayanna really is a special person. He further described her as adorable.

Dino’s dad said he watched all of his kids get married and hopefully, he also gets to see Guilmette and Shayanna’s too. Bill also expressed his excitement over Jenkins’s then-pregnancy with her third child and said the child would be a “bright spot” for the family.

Before Shayanna, Guilmette Too Had A Family Of His Own

Like Jenkins, Guilmette, too, has a past. He is a father of a 24-year-old daughter, Mia from his previous relationship. However, Dino hasn’t mentioned who is Mia’s biological mother.

By the looks of it, he seems to have a doting relationship with Mia. Guilmette has welcomed Shayanna’s children with outstanding maturity and love. He hardly misses mentioning Jenkins’ daughter with Hernandez over his socials.

Guilmette’s eldest daughter, Mia, who is also an equestrian, studied at Salve Regina University and the University of Rhode Island. She is also a graduate of Lasalle Academy.

Are Dino And Shayanna Still Together?

While there is no piece that tells Guilmette and Jenkins are done or something like that, the couple has hardly appeared together in any of their personal business. It’s not that they like to keep their family matters personal; each of their Insta doings seemingly tells how much they are open to sharing just about everything that happens in their family.

Both Dino and Shayanna can’t seem to get enough of having moments with their daughters and promptly sharing those moments with their fans over their socials. However, it’s been a while, they have appeared by each other’s side. This has led many to believe if things have gone south between the two, though, a solid confirmation is yet to come.

In July 2017, WPRI reported Guilmette was to fight a rival, former baseball player Louis Savastano. The outlet detailed the pair were competing in Brawl for All, a promotion that seeks to get real-life rivals to square off against each other in the ring.

Guilmette told WPRI how he feels about Savastano. The Long Island native said he doesn’t like him at all. While Savastano said Dino is just a bully around town. They also banged heads a couple of times. Jenkins’ partner trained at Balletto’s Gym in Providence. Ironically, nobody knows if the brawl ever happened and people, too, have sort of forgotten about the feud.