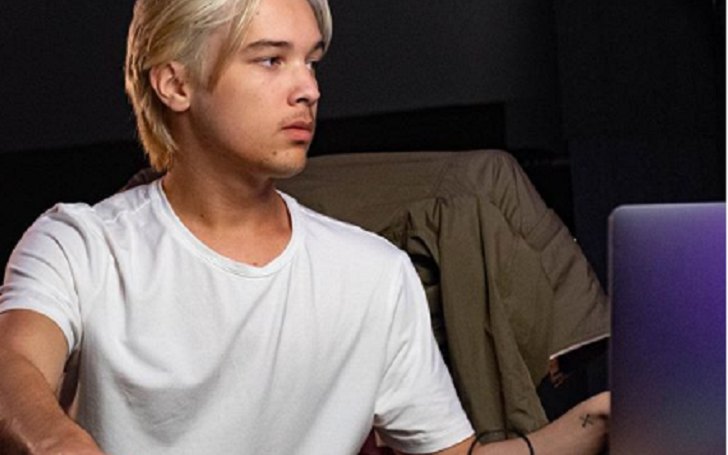 Elijah Hendrix Wahlberg, 19, is famous around the globe because of his celebrity dad Donnie Wahlberg. His father is a gifted personality with hands tied in singing, acting, and even production.

And just like his dad, Elijah is also following in the footsteps of his father. He is trying to get out of his father’s spotlight and carve a name for himself on his own.

Who is Elijah Hendrix Wahlberg?

Elijah is a popular celebrity kid. He was born on 20th August 2001, in the United States. He is the youngest son of Donnie Wahlberg and his now ex-wife, Kimberly Fey Wahlberg.

Wahlberg has an older brother named Xavier Alexander Wahlberg. Xavier is also a music lover who used to play in a hardcore band but prefers to remain out of the public glare.

Moreover, Elijah also have multiple cousins from his paternal side. His famous uncle Mark Wahlberg has four children with his model wife, Rhea Durham.

He holds an American nationality and belongs to mixed ethnicity. He is half Swedish, half Irish, French Canadian, and English.

Does Elijah have any step-siblings from his dad’s second marriage?

Donnie and his second wife Jenny don’t have any biological kids. However, the musician has adopted Jenny’s son named Evan Joseph Asher (born on 18th May 2002) from her previous marriage with actor and director John Mallory Asher.

His Education and Love For Music

Elijah Hendrix Wahlberg currently studies music at Berklee College of Music, in Boston, Massachusetts. He is set to complete his graduation in 2024.

Being the son of one of the most successful entertainers, Elijah too has a great interest in the same field. He often attends his dad’s band, New Kids on the Block concert. He posts pictures from the concerts.

The soon-to-be artist also practices the electronic keyboard and several other musical instruments.

Elijah Hendrix Wahlberg Relationship with His Father and Mother

Elijah and father Donnie both share a deep bond. The two are huge fans of the basketball team Boston Celtics. They frequently attend many of their games too.

He also cites himself as the official campaign manager for NBA star Jaylen Brown All-star season 2021.

Besides, Donnie is a proud poppa. According to him, since his boys came to this world, his whole life changed. Last year, he posted a childhood photo of his sons in honor of Father’s Day in 2019.

Talking about his mom, Kim, she usually doesn’t appear with her son. Still, their bond is as strong as anything. Kim often wishes Elijah on his birthday and on other occasions.

Currently, she maintains a very lowkey life since her divorce from Donnie in 2010. She works as a Real Estate agent in California.

As for Elijah and Xavier’s custody, Kim and Donnie co-parented their kids.

Who is Elijah Hendrix Wahlberg Dating?

Well, it looks like the handsome hunk might have a girlfriend. Elijah is reportedly dating Grace Adduci. She is also a passionate photographer and a music lover.

They both have yet to confirm the rumors but judging by their social media posts they look like more than friends. The two also attended several Celtics games together.

What is Elijah Hendrix Wahlberg Net Worth?

Elijah Hendrix Wahlberg’s net worth is under review. His doting father Donnie has an estimated net worth of $25 million in 2021.

Do You Know Julian Murray Stern Is The Son Of Lisa Kudrow: Untold Facts