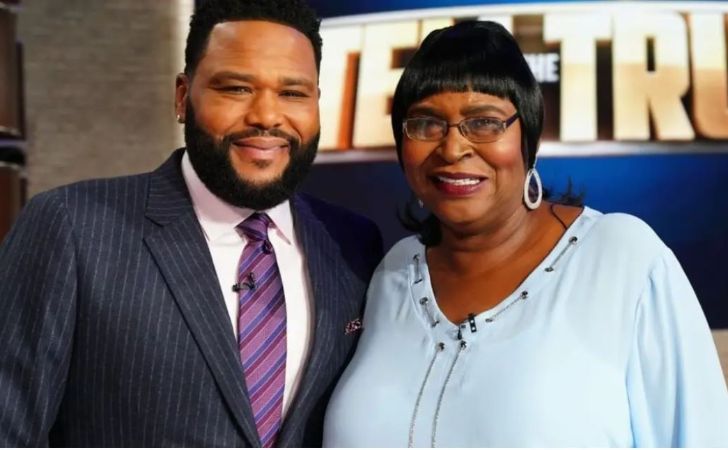 Doris Hancox, also known as Doris Bowman, is an American actress & TV personality known for her work in To Tell the Truth. She has also appeared in numerous movies like Black-ish, Common Bond, and others. Besides, she is also famous as the mother of American actor Anthony Anderson.

Despite being the mother of a famous child, she has maintained an identity of her own. She has not let her son’s fame overshadow her and has gained her own audience because of her outspoken attitude and wittiness.

Well, in this article, we are going to explore every aspect of her life including her career, marriage, husband, & relationship with her children.

Doris Hancox Is The Mother Of Actor Anthony Anderson

Do you know Black-ish actor Anthony Anderson? Well, Doris Hancox is the mother of the handsome actor who was born on August 15, 1970, in the United States.

She shares a great relationship with her son and gained fame only after Anthony made it big in the movies. Apar from Anthony, she has three children but the details about her other children are not known.

As of now, Doris who also had a desire to become actresses as a youth has been pursuing her dreams. Well, she has already appeared in some successful movies and TV series.

Doris Was Was a TV Operator Before Becoming An Actress

Back in the days when she was a single mother to her son Anthony, she worked as a telephone operator to make ends meet. Though Hancox always wanted to be on TV and in movies, she could not make her dreams into reality because of the struggles she went through.

However, with the success of her son, she is finally getting to live her dreams as an actress and TV personality. She made her debut on TV in the series Celebrity Family Feud in 2015.

Further from 2017 to 2020, she appeared in Entertainment Tonight, which was followed by, To Tell the Truth from 2016 to 2021. Likewise, as an actress, she has appeared in The Truth, where she portrayed a character named Flossie and Black-ish, where she played Doris.

She Was married To Husband Sterling Bowman

Doris Hancox’s life has not been very smooth when it comes to relationships. Her first relationship with whom she gave birth to Anthony ended for an unrevealed reason. After being a mother at the age of 18, and raising a kid as a single mother for a while, she married a businessman named Sterling Bowman.

He was the only father I knew or cared about. He raised me as any father would, with love, patience, understanding, and discipline. I’m grateful because he taught me what it took to be a man. He wasn’t perfect, which made him even more of my hero.

Doris Hancox Is Addicted To Bingo

It is pretty strange but Anthony’s mother Mama Doris is a big bingo addict. She loves playing bingo, to the extent that she even skipped her chance of meeting former president Barack Obama because she was playing bingo.

Anthony revealed this secret back in May 2016, when at the VH1 show Dead Mama, where he stated that raised himself for 37 years because his mom was too busy playing bingo. Adding to this, his mom stated,

I’m into bingo, baby. I made him learn how to cook, clean, wash dishes, pay bills… everything

Moreover, the All About the Andersons actor stressed the fact his mom chose bingo over a chance to meet the president. He reportedly offered the chance to her mother after he was invited to meet President Obama on one occasion. He said,

I was like, ‘Mama, we’re going to meet the president. “She’s like, ‘Hmmm… Well, I already paid my $300 to go to Vegas, but let me see if I can transfer this into the other girls’ name.’ Not even a second later, she’s like, ‘You know what, I’m not going to be able to transfer everything into the girl’s name, it’s in my name. So why don’t you call the president, tell him I’ll be there in August and it’s going to be me plus six.”

Check out the clip here.

How Much is Doris Hancox’s Net Worth?

She is a successful celebrity and is pretty obvious to earn a huge salary. But unfortunately, she has not revealed the exact sum of her net worth.

However, her son Anthony is estimated to have around $25 million in net worth, as per Celebrity Net Worth.