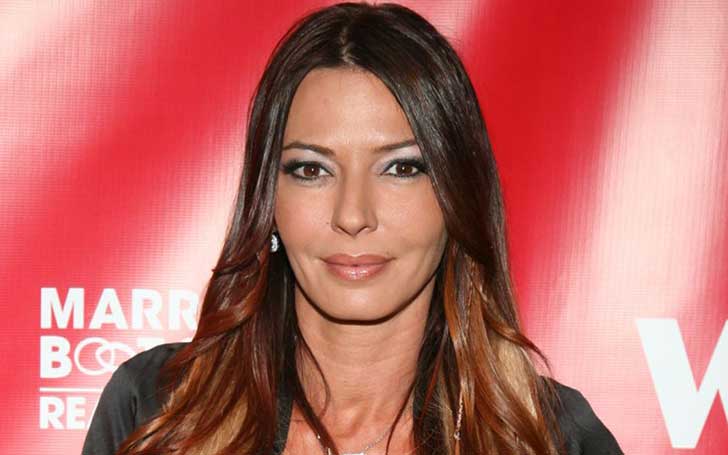 The Albanian-American television reality star, Drita D’Avanzo grabbed media attention following her appearance in the VH1 series Mob Wives. The series focuses on the lives of NYC women whose husbands have been imprisoned. During her appearance on the show, D’Avanzo made a constant buzz with her nasty phone fight with her husband.

After the VH1 show ended, D’Avanzo has focused to build a career as a makeup artist. She has been promoting herself as a licensed makeup artist through her Instagram where she has boasted more than 1 million followers. Even after the end of the show, her fans are always curious to know about her relationship with her husband.

Besides, in August 2020, Drita D’Avanzo’s husband was charged with five years in jail for the possession of a gun.

So, let’s go through every detail we have about D’Avanzo and her husband.

Well, the 44-year-old reality star is married to Lee D’Avanzo for more than two decades. The husband and wife have two children, daughters Aleeya D’Avanzo and Gizelle D’Avanzo.

In Drita and Lee’s conjugal life of over twenty years, they have spent pretty little time together due to Lee’s time in prison. Lee is a notorious criminal in the United States.

As reported, Lee was considered the head of the mafia farm team “The New Springfield Boys” in 2001. He was subsequently arrested over bank robbery and drug deal charges dating back to the ’80s. He then received a sentence of eight years in prison.

Drita said her husband was released after he served his time in prison. But, he was again sentenced for another 2 to 5 years following a couple of years for similar crimes.

As per Heavy, Drita found out that her husband Lee had been unfaithful to her during the early 2010s. After that Drita and Lee separated and the former had also contemplated filing for divorce. But, they later rekindled their romance.

Drita was Best Friend with Her Husband’s Ex

Before Lee started dating Drita in the late ’90s, he was in a serious relationship with Karen Gravano. Gravano remained low key for years before she returned to Staten Island to work on the Mob Wives.

Meanwhile, Gravano and Drita were friends before the latter started her relationship with Lee. Talking to Hollywood Life, Drita said she was a friend of her when she was 19, however, their friendship ended abruptly as Gravano moved on with her life.

And years later, the old friends met when they both worked on the VH1 series. Drita described the situation as painful that her best friend at one point slept with her boyfriend.

Drita further said she was afraid if she stole Lee from Karen or if she was sleeping with him while he still dated Karen. But, Karen said she never thought about the relationship after their break up and she and Drita never talked about this.

Drita and Her Husband Lee’s Arrest of December 2019

Drita and husband Lee were arrested on December 19, 2019, from their Staten Island home. The pair was detained after authorities found illegal drugs and weapons at their house during the raid.

The officers found two loaded firearms, a 9mm pistol, and a .38 caliber revolver. Further, they busted a huge amount of marijuana, an assortment of pills, and two scales with residue.

Drita was released after she posted her $15k bail, while her husband remained in custody after his bail was set at $100,000. Moreover, Lee was remanded on a fugitive warrant out of New Jersey on a separate yet related case.

In February 2020, the district attorney acquitted Drita of all of the criminal charges. On the other hand, her husband Lee pleaded not guilty. Meanwhile, in March, Lee pleaded guilty to possession of a firearm at the Brooklyn federal court.

Lee was Sentenced to Five Years in Jail

“Mob Wives” star Drita D’Avanzo’s spouse Lee D’Avanzo was sentenced to five years in prison on August 7. In the final hearing at the Brooklyn court, he was pleaded guilty for the possession of a gun.

The court pleaded him guilty of having two guns in his house loaded with hollow-point ammunition.