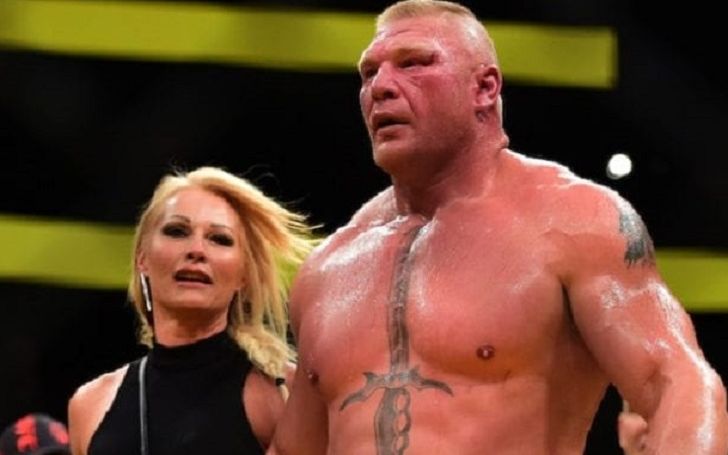 Duke Lesnar is the star kid, the son of one of the power wrestler couple Brock Lesnar and his wife Sable. His father is a former mixed-martial artist who won the UFC Heavyweight Championship, defeating Randy Couture. Brock also won the WWE world championship, making himself the only person in history to hold championships in both UFC and WWE.

As for Duke’s parents’ marriage, the two have been married since 2006. He has also an older brother named Turk. Both of them are immensely interested in hockey.

Well, in the following sections, we will try to explore more about Brock Lesnar’s son, including his half-siblings and more.

How old is Duke Lesnar? All About His Early Life

Lesnar was born on 21st July 2010, in Minnesota, the United States of America. He spent the first few years of his early life in his hometown in Minnesota with his parents and older brother. His dad later sold their rural estate outside Minneapolis for $750,000 in 2014.

The 43 wooded acres 1996-built property boasts an updated kitchen, four bedrooms, and 3.5 baths as well as a pair of offices in its 3,247 square feet of living space. Online tabloids say that Lesnar bought the property for $783,500 in April 2003.

Duke now Lives on a Farm

After they sold their mansion in Minnesota, the family of four made their move on a farm near the village of Maryfield, nestled 250 kilometers southeast of Regina, Maryfield, Saskatchewan. The WWE reigning world heavyweight champion told ESPN’s SportsCenter,

Has an Older Brother

Duke grew up along with his older brother Turk Lesnar, born on 3rd June 2009, in Minnesota. His parents have kept both of their children a little bit private from the media. They prefer to live a rather secret life.

Yes, the youngest child of Lesnar loves to play hockey. He currently plays for the Wawota Minor Hockey organization along with his older brother Turk. Both of them have represented their U-13 hockey team at Moose Mountain Minor Hockey League.

How Long Have Duke’s Parents Been Married?

Brock and Sable have been married since May 2006. The couple exchanged their vows at the wedding ceremony held in Medina, Minnesota. They later organized a lavish party at the Medina Ballroom which was attended by numerous of their close friends and family.

The couple dated for around a couple of years before they tied the knot. Brock and his wife Sable first got engaged in 2004. Nevertheless, they called off their engagement in early 2005. But, the power lovebirds rekindled their romance and got engaged again in Jan 2006, a few months before their nuptials.

Duke Lesnar Has Three Half Siblings

Lesnar has twin half-siblings; sister Mya Lynn and a brother Luke from his father’s relationship with his former fiancee Nicole McClain. His older half-sista Mya now competes in track & field at Arizona State University. On the other hand, like his younger half-brothers, Nicole is also pretty into ice hockey.

Besides, Duke has an older half-sister named Mariah, from his mother’s first marriage with Wayne W. Richardson. Sadly, Richardson died in a drunk driving accident in 1991. For the second time, Sable married Marc Mero, a wrestler, and former boxer.

Know Something Aout His Mother

Born and raised in Jacksonville, Florida, Reena Greek who is better known as Sable was interested in several sports such as horseback riding, softball, and gymnastics. Winning the beauty pageant at the age of 12, Sable later started working as a model for companies like L’Oréal, Pepsi, and more.

Besides, Greek is a successful wrestler and an occasional actor.

What is His Father’s Net Worth?

Duke Lesnar’s dad Brock Lesnar has an estimated net worth of $25 million. He has raked such a hefty fortune from his successful wrestling and mixed-martial arts career.