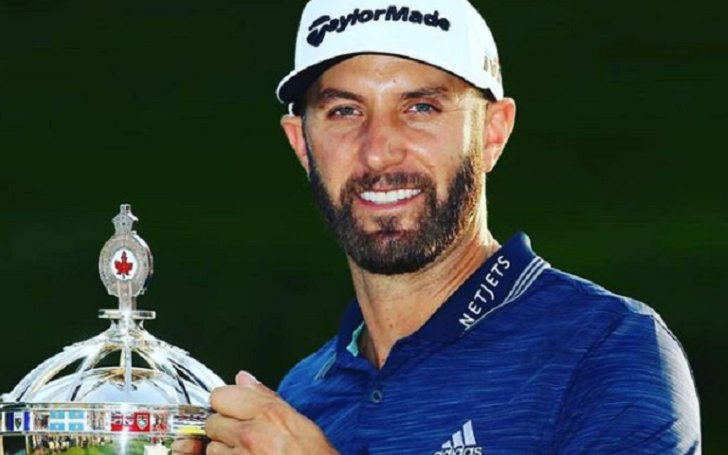 The greatest golfer Dustin Johnson has already gained immense success professionally. Not only his professional life, but the golfer has also maintained a decent balance when it comes to his love life. In fact, a lot of the audiences are already curious about Dustin Johnson’s wife.

Well, in that case, Dustin is definitely in a relationship with Paulina Gretzky, the daughter of the legendary hockey player, Wayne Gretzky. The two are together for many years. But, if they are actually married is still a question. Also, find out if they have any children.

Moreover, we will further discuss Dustin’s past affairs in the article!

No, Paulina isn’t Dustin’s wife. Due to the long-term relationship the two are enjoying for years, several of their fans are wonder if they got married. In fact, the two are leading a delightful relationship but are yet to convert their romance into nuptials.

Besides, the pro-golfer didn’t talk anything about their wedding plan in the near future. Although their marriage is still a big question, their relationship looks pretty strong than the married duo.

It seems it doesn’t need any kind of validation. Hope the big day for the couple will come soon.

In 2009, Johnson came across his future girlfriend Paulina’s mother Janet Jones at the Hero World Challenge golf tournament. Just after the tournament, the Gretzky family and Dustin had dinner together, where the pro golfer met Paulina.

The two had an instant attraction from the encounter. Wayne’s daughter told GOLF they remained friends for a couple of years before things started becoming romantic between the two. She said,

“We became good friends. Actually, my whole family became friends with Dustin — my brothers and parents saw him a lot more than I did.”

Sources also reported that Dustin and Paulina both were linked to other people at the time and didn’t go on their first date until 2012. They officially began dating in early 2013.

Dustin Johnson Proposed to His Girlfriend in 2013

Johnson popped the big question after several months of their love affair in August 2013. He announced the happy news via an Instagram account with a photo of his fiancee’s stunning engagement ring on her finger. He wrote on the picture,

It’s been around a decade since the two are engaged but we have yet to hear anything about their marriage.

The power couple is the proud parents of two kids. They welcomed their first child, a son named Tatum Gretzky Johnson on January 19, 2015. Johnson confirmed to People,

“Paulina and I are happy to announce the arrival of our baby boy, who was born in Los Angeles on Monday morning.”

They announced their pregnancy news in September of 2014.

Gretzky announced her second pregnancy with her partner, with a photo of holding up ultrasound and cradling her growing baby bump in Feb 2017.

After some time, they also disclosed the sex of their baby with an Instagram video.

In 2018, the rumors of Dustin’s infidelity swirled on the internet after his alleged romantic relationship with a California socialite, Yassie Safai hit the media. But, his rumored mistress Yassie told TMZ they weren’t in any kind of relationship. She said,

“I am not in a relationship with Dustin Johnson. Nor have we had any prior relationship.”

Safai also opened up they first came across at the Sherwood Country Club and said they “do not have a close friendship.”

A source close to the renowned Gretzky family told the tabloid that Dustin and Paulina’s relationship was still on the safe side. Later on, the golfer responded to his split speculation, tweeting,

“Every relationship goes through its ups and downs, but most importantly, we love each other very much and are committed to being a family.”

The duo is still leading a blissful love life.

Although the two have faced lots of ups and downs, their love life is still sailing smoothly because of their immense trust in each other. The golf legend in an interview with Golfweek told that his first property was his golfing career but now, it is his long-time partner Paulina and their two adorable kids.

On the other hand, Paulin also celebrated her fiance’s historic win at the 2020 Masters Tournament, giving him a sweet kiss on the golf course.

Prior to his relationship with Paulina, Dustin was also linked to a few ladies in the past. He was in a relationship with his college sweetheart Amanda Caulder. The couple dated for a long time before their break up in late 2010. According to sources, they are still close friends.

Soon after his split with Amanda, the golfer started dating Natalie Gulbis, a fellow golf star. He said at the time, “Absolutely we’re dating. Doesn’t matter that I blew a major last year at the PGA; Natalie is MAJOR girlfriend material.”

Nevertheless, their romance also couldn’t be last long and they went their separate ways after months of love.

Furthermore, Dustin was once also rumored to be dating Miss Piggy. He competed with her in a Pro-Swine event in Las Vegas. He denied the rumors in a telephone interview with Golf Central Daily,

“We’re not dating. At this stage of the season Swine Flu or a week punishing the porcelain with salmonella is just not an option.”

Johnson claimed he was a single guy at the time.

Paulina is the oldest daughter of ice hockey star Wayne Gretzky. Her mother Janet is an actress. She grew up along with four siblings; one younger sister named Emma Gretzky and three brothers named Tristan, Ty, and Trevor Gretzky.

Talking about her profession, Gretzky is a model and social media sensation. She started gaining huge media and public attention due to her racy photos on Instagram and Twitter from a young age. She was even forced to delete her account twice due to her provocative nature photos.

Paulina once appeared on the cover of FLARE at the age of 16.