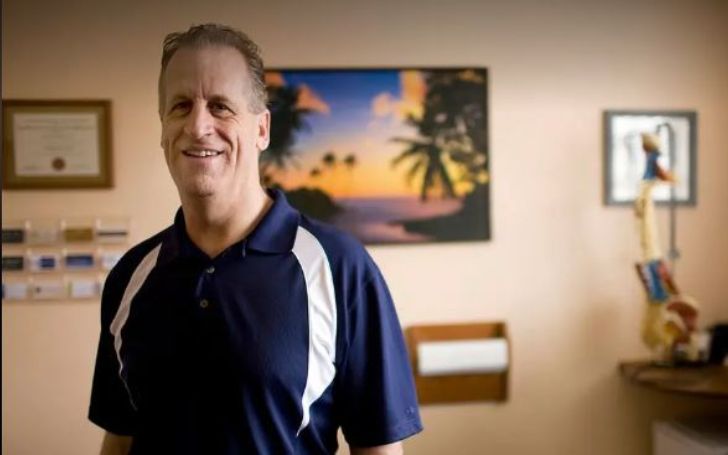 Edward Wesley Rodgers or Ed Rodgers is a sports injury specialist and traditional chiropractor who is better known as the father of the Green Bay Packers quarterback, Aaron Rodgers. Aaron’s father, Ed has been in the chiropractic business for more than 20 years.

Ed’s middle son, Aaron is one of the most notable faces in the NFL. For years, he has been in the headlines be it for his on-field achievements or his relationships, or vaccine status. People apparently can’t seem to get enough of the Packers no 12. And the attention occasionally also shifts to his family members. And in this case, it’s the old man, himself, Ed Rodgers.

Aaron’s dad, being a chiropractor is famous among his patients and locals for eliminating any kind of back pain and creating wellness pain. He also has been in the headlines with respect to his allegedly tense relationship with his famous son. Here are some extended details recounting all those in addition to answering who actually is the father of Aaron Rodgers.

The Rodgers patriarch, Ed Rogers was born in Brazos County, Texas in 1955. Ed though originally is a native of Lompoc, a smaller town in Southern California.

Ed is a graduate of Chico State University where he studied bachelor’s in Physical Education/Exercise Science. He later also got a master’s in exercise physiology. Ed Rodgers additionally studied at Western States Chiropractic College from where he graduated in 1997. He additionally is a member of the American College of Sports Medicine.

While the write-ups have stated Aaron is a descent of English, Irish, and German ethnicities, it is unclear what part of that comes from his father, Ed Rodgers.

Back in early 2021, the Chico Chiropractor was once again among the storylines for his critical take on COVID-19 vaccine mandates. Earlier on his Twitter, Ed had referred to liberals as “brainwashed idiots” who were destroying their organs by taking the vaccine.

Ed at the time, during an interview with USA Today, also shared his views on his footballer son, Aaron who also had an anti-vaccination take on COVID-19.

The Golden State resident said he was proud of his son and added how he trusted the ex-Superbowl winner’s judgment and decisions. He further stated how he also would have done the same if he was in the place of a Pleasant Valley graduate.

Aaron denied the vaccine even after testing positive for COVID-19 in Nov 2021 after which he had to stay in quarantine for 10 days.

Edward Career As A Chiropractor; His Expertise

As mentioned, Edward is a professional chiropractor and quite a reputed one.

He apparently offers chiropractic solutions to specific pain and facilitates his patients to desire increased wellness and fitness. As a chiropractor, the MVP’s father is famous for taking a whole-person approach rather than just dealing with the symptoms. Many have admired him for his custom of looking for the underlying causes of disease, discomfort, and pain.

Edward Wesley Rodgers, Too, Was A Footballer

Much like his son, Ed too played football while in college. The Chico native in the 70s played offensive lineman for the Chico State Wildcats. He also involved himself in a semi-professional football career before resting his career as a chiropractor.

He played for a California League semi-professional team in Marysville. The team is noteworthy for winning back-to-back national championships.

In the meantime, he also had a few Canadian Football League tryouts. Ed once admitted when he was young, he was pretty competitive himself in addition to going pretty intense at times.

Edward And His Wife Darla Are Together Since College

Aaron’s father has been in a long relationship with Darla Rodgers. Ed’s longtime spouse and Aaron’s mother is also a graduate of California State University, Chico. In fact, the physical therapist and Darla began their relationship when they were both students at the same college.

What’s more, Darla was also a collegiate athlete similar to her son and husband. She was a dancer as well as a basketball player. After the marriage, Darla and her husband had three sons, Luke, Aaron, and Jordan.

When Aaron was growing up, Edward and Darla along with their sons moved around a bit. In the process, they lived in Ukiah, California, Beaverton, Oregon, and others.

The family ultimately returned to Chico in 1997 and has been its residents ever since except for the sons. The youngest son, Jordan often thanks Ed for his sacrifice in raising him and his brothers. He once mentioned how the Chico State graduate used to work three jobs to make ends meet.

What Does Ed And Darla’s Other Sons, Luke And Paul Do For A Living?

Ed’s son, Jordan gained popularity through his job as one of the participants on the ABC television show, The Bachelorette. He also is part of ESPN’s SEC Network in addition to being in a fitness and lifestyle coaching business titled Met-Pro.

Similar to his father and brother, Jordan furthermore spent two seasons as Vanderbilt’s quarterback starting from 2011 to 2012. Ed and Darla’s eldest, Luke Rodgers, on the other hand, reportedly lives in Nashville, Tennessee. He apparently is a writer for CBS Sports and 247 Sports.

The Conflict Between Ed, His Two Sons, And Aaron

The synergy between the Rodgers family is a bit complicated issue and apparently, it has been so for a while. Several times in interviews, Ed has said he and his other sons haven’t really been on speaking terms with the ESPY winner, Aaron for some years.

The first time people got a hint about the rifts between the Rodgers family was when Aaron’s brother, Jordan, a former Bachelorette winner, talked about the strained relationship between him and his celebrity athlete brother just after winning the ABC’s reality dating show, Bachelorette.

Jordan discussed the tense relationship between him and his brother, Aaron whilst talking with his then-fiancée Jojo Fletcher on camera.

Jordan said to Fletcher that she probably wouldn’t meet Aaron on the couple’s then-upcoming trip to Chico. He explained Aaron had distanced himself from him and the rest of his family.

Ever since that, the open to suppositions drama among the Rodgers family has been public fodder. The New York Times reports Aaron allegedly stopped reaching his family members at the closing of 2014. This was a while after he began a relationship with the Predator actress Olivia Munn.

The Reason Behind The Friction In The Rodgers Family

While Ed and his wife, Darla have resisted themselves talking in detail about what had really happened, the couple has confirmed things are not good between the family and the six-foot-two inches QB.

The Business Insiders reports the disagreement is to an extent that in Christmas 2016, Aaron returned the presents his parents sent to him.

Further Ed and Darla are also needed to purchase the tickets for Aaron’s games on their own as the 2005 round one draftee apparently had made it clear that he didn’t want them to be at his games. Aaron reportedly also didn’t attend his brother, Jordan’s wedding.

Actress Olivia Munn Had Something To Do With Ed Wesley Rodgers And His Son, Aaron Strained Relations

While a clear reason as to why there is sourness among the Rodgers family is unknown, reports suggest it has something to do with Aaron’s ex-girlfriend and actress, Olivia Munn.

Us Weekly claim Aaron pulled himself away from the family after they told him how they didn’t trust Munn and argued that the Buddy Games actress was with him for some other reasons. This apparently made Ed’s middle son furious and he eventually cut himself off from his family.

The Differences Is Also Because Of Aaron’s Views On Religion

One other reason is presumed to be Aaron’s views on Christianity. Once while on a podcast with his ex-girlfriend, Danica Patrick, the 38 years old had said,

I don’t know how you can believe in a God who wants to condemn most of the planet.

This apparently made Ed and Darla disappointed as Aaron’s parents have always been devout Christian who also raised their children under the same faith.

What Edward Wesley Rodgers Has Said About His Relationship With His Son, Aaron Rodgers?

In 2017 while talking with The New York Times, Ed whilst commenting on the alleged bitterness among the Rodgers men, said,

Though the father of three has often hesitated to talk in detail about what the real issue is, he once reasoned that one (Rodgers) in the news was enough for him and his family.

He likewise added the real issue was rather complicated to explain when The NY Times asked him about Aaron’s rumored estrangement with him and his other two sons. Ed also remarked Jordan discussing the family matter on TV as some uncalled-for choice.

With The New York Times, the therapist said it was rather difficult for him to describe if the stiffness between him and his footballer son had softened or not. He nonetheless added that he and his family are all hoping for the best.

However, in late 2021, Ed stated things were progressing in the strained relations among the Rodgers boys. The ex-Western States student at the time said that the main thing was that he supports the Butte CC graduate. Ed also declared he was proud of his footballer son.

Aaron Refused To Talk About His Uneasy Relationship With His Family

As for Aaron, when WISN in Nov 2021 asked for his take on the matter, the Packers’ main man refused to bring up the family matter on camera.

Edward Wesley Rodgers Son, Aaron Is One Of The Richest In NFL; What About His Own Net Worth

While Ed’s middle son, Aaron may not be among the biggest takers in the NFL, he nonetheless finished 45th on the list of highest-paid players in NFL history when he signed a 5-year contract extension with Green Bay Packers in 2013.

As of 2022, he has an estimated net worth of over $200 million with a salary of around $50 million. Further, he is also an investor in several other sports franchises such as the Milwaukee Bucks. There’s also the money pouring in from endorsements and likewise income avenues.

Meanwhile though, no such specifics regarding the old boy of the Rodgers family, Ed have ever been mulled over or even teased for that matter. Having said that, the longtime pain analyzer’s own fortune has always been open to speculations and such. Regardless, in light of his lifelong career as a chiropractor in one of the most economically developed states, it might be safe to say, Ed also ranks among the wealthy chiropractors from his zone who presumably have a net worth in the region of seven figures.