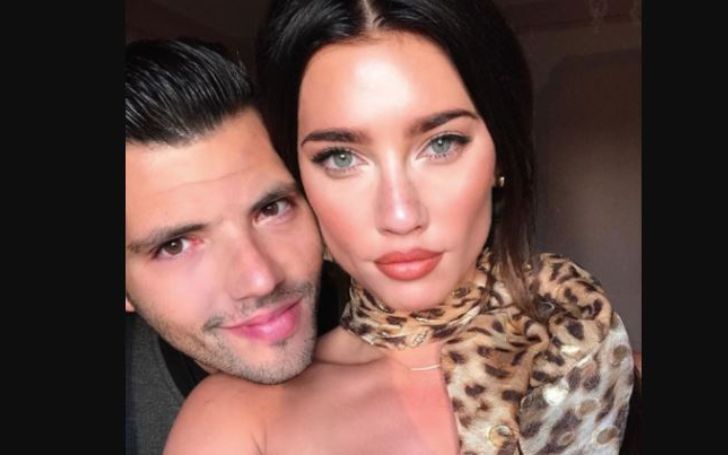 Elan Ruspoli is an agent who formerly worked for Creative Artists Agency in Hollywood. He, however, is better known as the wife of Canadian actress Jacqueline MacInnis Wood. Elan’s actress wife, Wood is best known for her role as Steffy Forrester on B&B, which she has been playing since May of 2008.

She is also the winner of two Daytime Emmy Award nominations for Outstanding Younger Actress in a Drama Series for her work in 2012 and 2013. Some people might recognize her as Olivia Castle, the young woman who endured a terrifying eye surgery in Final Destination 5.

Get to know more about this Hollywood actress’ husband, Elan Ruspoli; his early life, nationality, some highlights from his career, and his relationship with Wood in an extended version.

Elan Ruspoli Is An Only Child; Also Has Italian Parents

While an American by nationality, his parents are from Italy; something that his wife herself confirmed back in July 2019 with Daily Bloid.

My husband’s (Elan Ruspoli) paternal side is originally from Italy,

He is a native of Beverly Hills, California, and went to Beverly Hills High School. The now 36-years-old is also a former student at the University of Southern California. Ruspoli does not have much online presence. The talent representative’s Instagram account is also private.

Elan Ruspoli Is A Talent Agent; Has Represented Some Of Famous Hollywood Stars

Wood’s husband’s started working as a talent agent in 2007 at Creative Artists Agency (CAA) and has worked up the rankings, building an impressive roster of clients across film and television.

In Nov 2021 Elan, however, left CAA and landed a partnership with William Morris Endeavor (WME) for the Talent department.

Elan and the Skyrunners actress started dating almost a year before their engagement. The actors’ agent and the actress met through a mutual friend.

In an interview, Wood remembering the first time she met Ruspoli said,

“We met through my best friend Brian. We’d actually met at a few events briefly, but I wasn’t in the right place. Then, we were set up. We had a double date, and I was not ready but of course, when you’re not looking is usually when you find it.”

Wood initially hesitated to go on a date with Ruspoli, but the couple later eventually ended up starting a relationship. Ruspoli asked Wood to marry him in November 2017 and the couple married in July following year in 2018.

“Biggest surprise of my life. I’M ENGAGED!! Elan, you are my everything and I can’t wait to begin this new chapter with you,” she wrote on Instagram. “I feel like the luckiest girl in the world … I love you beyond words. My soulmate.”

Ruspoli And Wood Married In Italy

Ruspoli and his then-fiancee had a rather non-traditional route to their wedding. The actress and the Hollywood agent didn’t plan a grand event that year.

They initially were vacationing in Italy for the summer. The couple thought that since their friends and family were also traveling, they decided to invite them on a yacht and one of their friends officiated their marriage.

“We went to Italy for the summer, and it was perfect timing because our friends and family were also traveling. We ended up meeting them on a yacht, and one of my friends who was there officiates weddings, so we said, ‘Okay, let’s do this,’”

Mrs. Ruspoli explained to Soaps In Depth in March 2020. The Canadian actress says the wedding proved to be a very impromptu, casual, and laid-back event off the coast of Sardinia, which for her and her husband seemed perfectly fitting.

Elan and Wood later filed all their paperwork back in the U.S. Wood say the whole process from Italy to the US was just perfect. The pair after the marriage resided in Beverly Hills for a couple of years.

Due to the played-down nature of their wedding, there, however, aren’t many photos from the big day of Ruspoli and Elan; especially one that has surfaced on the internet.

Elan and his actress wife, Jacqueline are now parents to sons Rise, born in March 2019, and Lenix, born in 2021. Further in Nov 2021, the already parents of two announced they were expecting their third child.

The couple was expecting their first son Rise Harlen even before their wedding.

Wood and her talent-agent husband decided to name their first son Rise because to them the word means growth, the simplicity of moving forward.

‘We look to our son as an uplifting force toward positive change and a better world. ~ Thank you for going on this incredible journey with me! Giving me great tips and telling me all about your pregnancy/delivery stories,’

Elan’s wife wrote on her Instagram while explaining the meaning behind the name of her and her husband’s first child. Part of the reason they had multiple children is that Elan and his wife were both the only child in their family.

“Elan and I dreamed of having a large family as we are both only children and are over the moon our dreams are coming true.”

said the mother of two on why she and her husband decided to have more than one kid.

Ruspoli And Wood Have Been Living In Million Dollar Homes

In late 2020, MacInnes Wood and Ruspoli listed their Hollywood Hills house for sale.

The Los Angeles Times reports the parents of three listed it for $2.1 million, a price that reflects the renovations and works the couple put into it since purchasing it for $1.48 million in 2016.

The pair later eventually dropped the price to $1.9 million. After selling their Hollywood Hills home, the couple moved on to their new home; to the suburbs, & relocated to Westlake Village, California, according to MSN.

Their new home came with a price tag of $4.5 million.

Is Elan Ruspoli As Rich As His Wife; What Is His Net Worth?

While Elan’s Brazilian origin wife, Jacqueline MacInnes Wood is certainly a millionaire with an estimated net worth between $8 to $10million, the financial standings of Ruspoli himself are a bit of an untouched metric.

For all the couple’s celebrity-like mannerisms of living, their million-dollar residence, it, nonetheless, is quite indubitable that Wood’s baby father, Elan too might be all in all a wealthy man.

After all, he has represented some of Hollywood’s A-list celebrities. The best guess is he could have a net worth anywhere from hundreds of thousands to even millions of dollars.