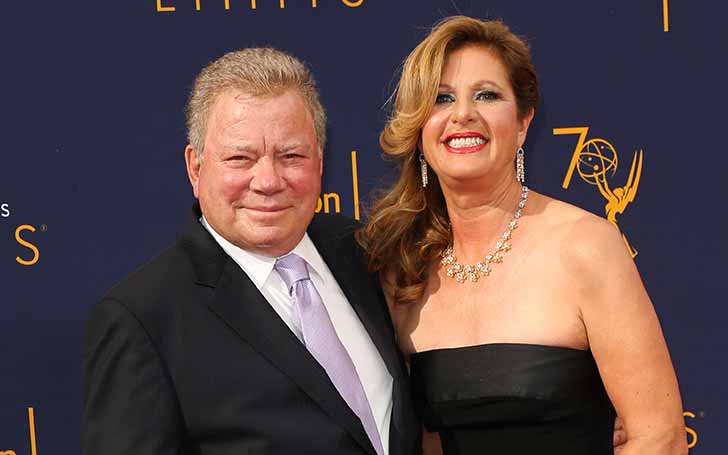 Elizabeth Shatner is an American television personality and former horse trainer. Besides, she is most famously known as the ex-wife of renowned Canadian actor, producer, director, and author, William Shatner. Elizabeth had an illustrious career of her own before she met Shatner, however, she made her way to the limelight only after she started seeing the Canadian superstar.

Elizabeth is the fourth wife of Shatner while it was the second marriage for herself. She lived a happily married life for nearly two decades before they split up. So, what is Elizabeth doing after her divorce? Has she found a new partner yet? What about her children?

We have all these answers here in this article. Let’s dive in without any further ado.

Elizabeth was born Elizabeth Joyce Anderson in the United States of America on December 30, 1958. She is 62 years old as of October 2021 and will turn 63 this December 30th. Other details about Elizabeth’s early life such as her parents, and siblings.

Besides, Elizabeth Shatner is an American by nationality and belongs to the White ethnicity. As a matter of fact, some online sites have mentioned she is of English ancestry.

Meanwhile, talking about Elizabeth’s education, she studied at Purdue University, West Lafayette, Indiana where she studied equine and animal science.

She was Passionate about Horse Riding From Early Childhood

Elizabeth became interested in horse riding while she was an infant and soon she became passionate about it. She started horse riding at the tender age of five and she got her first horse, a pony Gailceno at the age of eight. By the age of 14, Elizabeth had become a professional horse trainer.

Elizabeth’s love for horses later became the bonding factor with her ex-husband Shatner. Besides, she actively participates in the event “Hollywood Charity Horse Show” that her ex Shatner started. The charity helps differently-abled children and has raised millions of dollars so far.

Besides her love for horses, Elizabeth is a great nature lover. She was on a safari trip with her husband in Israel when she found an interest in art while clicking pictures of nature. She later named the art “Flowrosophy” which brings natural shapes, lights, and colors into life through her art.

After coming back from the trip, Elizabeth was greatly involved in artworks and soon unveiled the ‘Art by Nature’ series. The series focused on digital art, photography, original designs, tiles, etc.

She Has Appeared on Many Documentaries and Television Series

Besides, her other television appearances came in Life Beyond Trek: William Shatner, American Pickers, The Captains, and Gonzo Ballet. As a matter of fact, Elizabeth made her regular appearances in the TV documentary series The Shanter Project.

Apart from all, Elizabeth Shatner also wrote a song Together along with her ex-husband Shatner for his album Has Been.

Elizabeth Shatner married her second husband, William Shatner on February 13, 2001. The pair who had a courtship of a couple of years tied the knot in Lebanon. Their relationship gained huge media attention due to their huge age gap of nearly three decades.

A lot of questions were raised about their relationship after they started dating publicly. Nevertheless, the former husband-and-wife remained married for over one and a half decades and they always seemed head over heels in love with each other. Elizabeth and William Shatner don’t have any children together.

Nearly eighteen years after tying the knot, the Star Trek star filed for divorce from his then-wife, Elizabeth. In December 2019, TMZ reported that William had filed for divorce, however, the outlet didn’t report what was the reason behind their separation. Meanwhile, William had mentioned their date of separation as February 1, 2019.

Besides, Shatner and Elizabeth had a prenup according to which none of them was liable to pay spousal support.

Even though Elizabeth and William Shatner had a prenup, they had to divide their properties as per the prenup deal. They reached a divorce settlement in March 2020. As per the records, William Shatner got to keep two of their horses, Renaissance Man’s Medici, and Powder River Shirley, and two dogs, Macchiato and Double Espresso.

Besides, the actor also got control over all horse semen and horse equipment. Similarly, he got their Studio City home and Three Rivers ranch in California.

In the meantime, Elizabeth Shatner got couple’s homes in Versailles, Kentucky, and Malibu. Besides, she also took away horses Belle Reve’s So Photogenic and Pebbles.

Before Elizabeth met the renowned actor William Shatner, she was married to Michael Gleen Martin. She tied the knot with Martin in 1982 and lived a happily married life with him for around one and a half-decade before Martin sadly passed away.

Her Husband was Married Three Times Before Her

Elizabeth Shatner’s ex-husband, William Shatner was married thrice before he met his fourth wife. His first marriage was to Canadian actress Gloria Rand (nee Rabinowitz). They tied the knot on August 12, 1956, and a couple of years later, they gave birth to their first child, Leslie Shatner in 1958.

They went on to have two more children; Lisabeth Shatner and Melanie Shatner together. After the birth of their third daughter, Shatner got busy acting on Star Trek: The Original Series due to which his first wife, Rand divorced him in March 1969.

After his first divorce, Elizabeth’s ex-hubby Shatner married Marcy Lafferty. Marcy is the daughter of late producer Perry Lafferty with whom Shatner was married from 1973 to 1996. Following his second divorce, Shatner married his third wife, Nerine Kidd in 1997, but unfortunately, she passed away in 1999 due to accidental drowning.

Who Is Dermot Mulroney Tharita Cesaroni? Her Professional And Personal Life In Detail