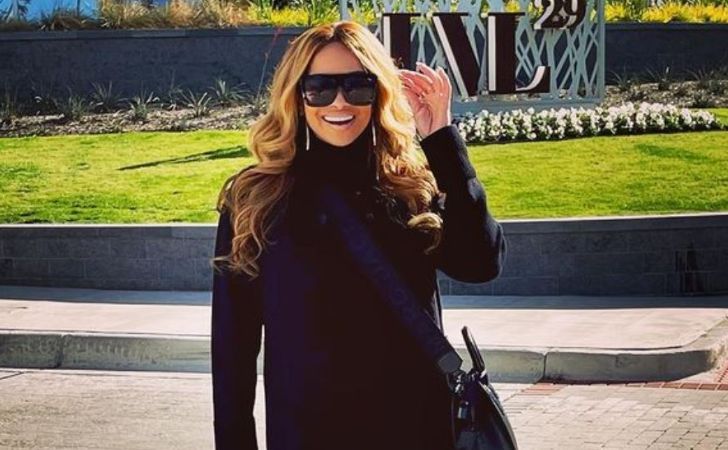 Patricia Southall, also known as Pat Smith, is the founder and spokesperson for Treasure You. She is also the first African-American to hold the crown as Miss Virginia USA. But apart from these accomplishments, she is recognized in the media as the ex-wife of comedian Martin Lawrence, and the current wife of Dallas Cowboys running back Emmitt Smith.

Patricia and Emmitt had been married for over 20 years, but it looks like the duo has decided to move separate ways. In July of 2021, the couple announced that they have decided to separate via an Instagram post. Further, she also has children from her marital relationship.

Well, here find everything about Emmitt Smith’s wife Patricia Southall including her career, net worth, & other interesting facts.

As we said, Patricia is married to her husband Emmitt Smith. He is an American former professional football player and was a running back for 15 seasons in the National Football League.

The couple met for the first time back in 1998 at a music festival in Aruba. They clicked right at their first meeting and began dating. Since they lived in different cities then, they were in a long-distance relationship for a while.

Well, after dating for around two years, Pat and Emmitt married on April 22, 2000. They are together for over two decades now. back in April of 2020, they even celebrated their 20th anniversary and shared a beautiful photo on Instagram. She wrote a lengthy message expressing her love for her husband. Check out the post here.

But unfortunately, things seem to have changed for the duo. Patricia recently announced that she and her husband have decided to separate.

It could be the most unexpected thing to happen between husband and wife of over 20 years Pat and Emmitt. But it looks like they are heading to a similar fate.

Back on July 31, 2020, Patricia announced that she and her husband have decided to separate. She also revealed that it was a mutual decision and that they were still going to be good friends and co-parents despite the separation.

Well, they might get a divorce soon, however, Patricia has not revealed if she has already filed for divorce from Emmitt. Hopefully, we will get the update soon in the future.

Patricia Was Married To Martin Lawrence In The Past

Prior to marrying Emmitt, Patricia was in a marital relationship with American actor, comedian, and filmmaker Martin Lawrence. They met for the first time back in the summer of 1992, back when Patricia still worked for the Governor of Virginia, L. Douglas Wilder. At the time, Martin was featured in a comedy concert that was held in Richmond, Virginia.

Their first encounter developed immediate chemistry between the two as they soon began dating. a few years into a romantic relationship, they tied the knot in 1995 in a small wedding ceremony.

A year later on January 15, 1996, they also welcomed their first and only child named Jasmine Page Lawrence. Unfortunately, things between them were not meant to last for very long as they divorce in 1997.

None of the former duos ever revealed the exact reason behind their split. After their split, Martin went on to marry Shamicka Gibbs, who he divorced in 2012. Together they welcomed two daughters Iyanna Faith Lawrence, & Amara Trinity Lawrence.

How many children does Patricia Southall have?

Pat is a mother of three children, one with her first husband Martin, and two with her second husband Emmitt. Like we have already stated, her first child Jasmine was born on January 15, 1996, from her relationship with Lawrence.

Later, she had two more children with Smith. Patricia and her second husband Emmitt welcomed their first child together on May 15, 2000. The kid whom they named Emmitt Smith IV was born just a month after their wedding. As of 2021, he is 19 years of age.

She welcomed her third child and second with Emmitt on October 15, 2003. The couple named their daughter Skylar Smith. She is 17 years old at present.

Later on September 22, 2010, Pat become a mother once again with the birth of a baby boy named Elijah Alexander James Smith. Besides, she is also a stepmother to Emmitt’s daughter Rheagen Smith from his relationship with his ex-girlfriend Hope Wilson.

She Is A Former Miss Virginia USA & a Philanthropist

Apart from her famous marriages, Patricia has an identity of her own. She is a former beauty queen from Virginia and even won the title of Miss Virginia USA in 1993, representing the Miss USA pageant the later year.

Along with a successful modeling career, she is also active in philanthropic works. She along with her husband is involved in several non-profit organizations. In fact, she is the founder of Treasure You, which is an organization focused on raising awareness about beauty and experience among women.

Moreover, Pat is also a TV personality and has appeared in TV shows like Halfway Point, Beverly Hills, The Wayans Bros, among others. Likewise, she is also a writer and has authored a book named Second Chance, which is about her marriage with Martin.

What Is Patricia Southall’s Net Worth?

As a successful author, TV personality, and the wife of a famous NFL player. Pat is doing well with her money and earns a considerable amount of money as her salary.

She was born Patricia “Pat” Annette Smith on December 17, 1970, in the United States. At present, she is 49 years of age. She is the daughter of father Henry Southall and mother Mildred Southall. Unfortunately, her father is no more in this world.

Pat spent most of her childhood in Chesapeake, Virginia, along with her Twin sister Pam. Like any other child, she shares a great relationship with her parents and siblings. Her sister Pam was diagnosed with colon cancer four months after the death of their father.

Well, she often shares photos of her parents and siblings on her Instagram which reflects the kind of love she has for them.