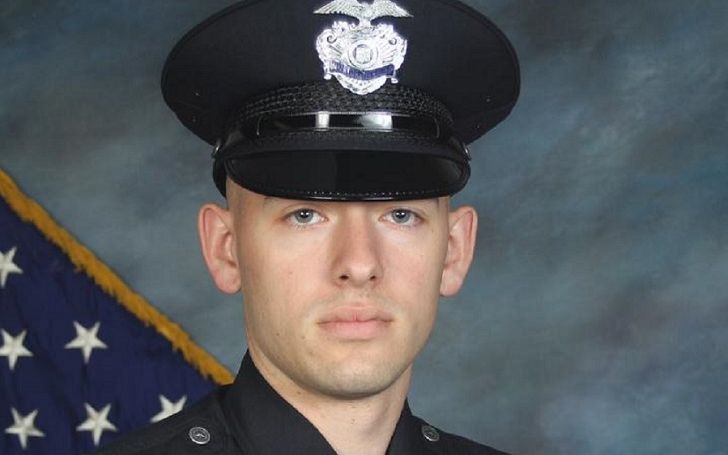 Tommy Zizzo (aka Tommy Zizzo Jr.) is a police officer by profession but rose to prominence as the son of the singer and veteran reality TV star Erika Jayne. His father’s name is Thomas Zizzo who mostly stays out of the spotlight. Like his super-secret dad, Tommy has also kept himself away from any media attention. Talking about the privacy Erika’s son prefers to keep, the “Xxpensive” singer once said it is because of his profession in law enforcement.

Besides, Zizzo shares a strong bond with his mother but is quite silent when it comes to his relationship with his dad. His parents tied the knot in the early 1990s and divorced when Tommy was a toddler.

Well, here are several other unknown facts about Erika Jayne’s son. Let’s have a look!

Who is Tommy Zizzo? His Professional Career

He is a police officer. His mother Erika told in an interview with Romper that her son was always destined to be in law enforcement. She also described the job as a “dangerous profession.”

“It’s a dangerous profession. I’ve known my son was going to be in law enforcement from the time he could walk and talk. “That’s all he’s ever wanted and that’s kind of your role as a parent is to honor who your children really are.”

Besides, for his mother Erika, she is one of the most successful TV personalities. She gained her initial fame following her role in NBC’s legal drama series Law & Order.

Erika Gave Birth to Tommy at 20: Know About His Relationship With His Father

Erika Jayne welcomed her first and only child, Tommy at 20 with her first husband Thomas Zizzo. He was born in Manhattan but was raised in Los Angeles by his single mother Erika. As of 2022, his age is 30.

Back in September 2020, Jayne shared a childhood photo of her son and wrote,

“I took this picture on New Years’s Day in Tanzania years ago. This trip was one of our favorites. Travel with your children, show them the world.”

Moving towards his parents’ love life, they went their separate ways just a few years after his birth. Erika came across her first husband Thomas at a China Club located in Manhattan. The former pair soon began a romantic relationship and dated for more than a year before they tied the knot. They exchanged vows in December 1991 at St. Patrick’s Cathedral.

However, Jayne’s marriage to Zizzo didn’t sustain for long and they divorced after a few years into the conjugal life. Since their separation, Tommy’s relationship with his father remains quite enigmatic. The father-and-son duo has yet to make a single appearance jointly in the media.

He attended Los Angeles Police Academy, graduating in late 2014. Back on 10th November of the year, Jersey City Police Activity League congratulated him for completing his graduation from LAPD on their Twitter account. They wrote,

Zizzo previously served as an explorer at Jersey City before joining the United States Police Force.

Talking about his ethnicity, Tommy is Caucasian and belongs to an American nationality.

Despite being the son of Erika, a regular face in the media, Zizzo prefers to live a life behind the spotlight. But, his mom Erika respects his privacy and also agrees with her boy’s choice of keeping himself away from the media. She once said,

“It’s not weird [that people are interested in him]. I’m sure that they’re curious because the only thing that they see is this thing. But I am a mother. My son does live with me. He is a police officer and he will remain off camera.”

Back in 2018, in an interview with Megyn Kelly, The Real Housewives of Beverly Hills star revealed that Tommy doesn’t want to pop up on any TV shows with her, even on RHOBH.

“Not everybody wants to be on TV — believe it or not. I know that sounds crazy. But, he’s in a dangerous line of work and he prefers his anonymity as much as possible and I agree with that.”

He Loves to Stay at Home With His Mother

Unlike his mysterious relationship with his father, Zizzo shares a strong bond with his mother. According to his artist mom, whenever Zizzo is off duty, he loves to spend more time at home. His mom Erika also feels fortunate that her son, despite being a busy police officer, manages his time to be with his family. She told Bravo TV,

In Sept 2021, amidst his mother’s ongoing divorce with her second hubby Thomas, Erika claimed that her ex-husband Girardi was injured during a home burglary. She reported that Tom underwent eye surgery following his confront with a thief during their Pasadena mansion invasion.

Erika further continued that her son, Tommy, after knowing about the incident rushed towards their house. Unfortunately, while coming back home, Zizzo was involved in a car accident, flipping his car five times while driving home.

Did Tommy Zizzo Died In An Accident?

There has been rumors about tommy Zizzo’s death. But the fact is he is not dead but alive and perfectly fine. In fact, he has been supporting her mum in her legal seperation with her husband Thomas Girardi.

Moreover, the  “Real Housewives of Beverly Hills” star Erika Jayne in a conversation with Los Angeles Polic Department spoke about her son Tommy. He spoke how Tommy has been supporting her and also stated that he is soon turning 30. She said,

My son’s been amazing. And I will say this — the silver lining to all of this s–t is that our relationship is stronger. My son and I, we’ve really come together. … He’ll be 30 in June. Jesus. I just remember walking around here in New York being pregnant with him, but he’ll be 30. And so asking him what he thinks about things, you know, you get this adult perspective, and it’s really nice.”

His Net Worth Details

They used to live at Erika’s ex-husband Thomas Girardi‘s mansion in Pasadena but since they separated in late 2020, the mother and a son have reportedly moved to a smaller residence worth around $1.5 million in Los Angeles.

As we have mentioned above that Tommy is a private guy. And the same could be said when it comes to his love life. The 30-year-young policeman has never come forward with his relationship to date. So, at present, it is quite confusing whether or not Tommy is married to a wife.

Who Is John Henry Kelley? All About Michelle Pfeiffer’s Biological Son