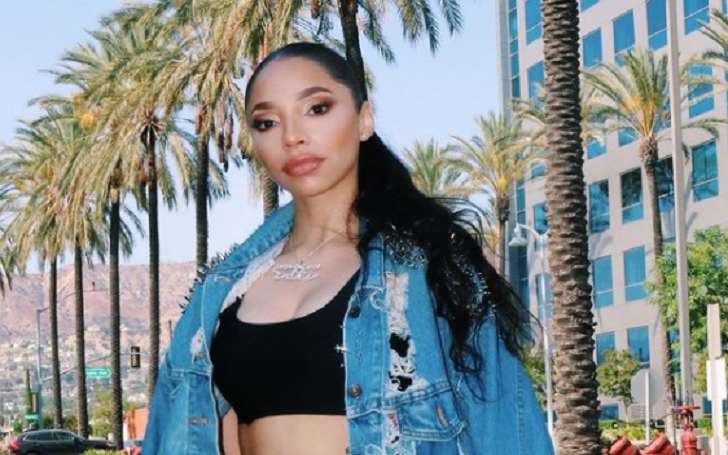 Erin Bria Wright is the daughter of a late rapper and visionary entrepreneur Eazy-E. She was just four at the time of her father’s untimely death. Even though Erin couldn’t spend much of her life with her dad, a few tender moments the star kid had spent with him are enough to remember her late old man.

Besides, being the daughter of one of the legendary artists, Erin is following her father’s career path. She has released a few singles to date.

Additionally, the article will also include the details of her extended family including her ten-half siblings as well as the early death of her father. Let’s take a closer look!

How old is Erin Bria Wright? Her Early Life

Erin is 30 as of 2021. She was born on 16th July 1991, in Compton, a city in southern Los Angeles County. She spent the majority of her early life in LA, California with her mom.

In addition, Wright has an American nationality and belongs to a mixed ethnical background.

Erin is the daughter of Eazy-E and Tracy Jernigan, a music manager who spent around two decades in the entertainment world. She said that her parents were together since the rise of the hip hop group N.W.A. And the couple went their separate ways a year before her father’s demise. Erin was just four years old at the time of her dad’s death.

Wright had a lot of memories with her father. She used to spend her time in his office before the tragedy happened. She recalled CBS News, “He was really playful.”

Erin frequently shares an adorable photo of her late dad on various occasions like Father’s Day, Birthday, and more. She shared one of the rare family photos, featuring herself with her parents on the occasion of the 2020 Father’s Day.

In addition, the resemblance between Erin and her father was so strong. Wright said, that “when “Rock the Bells” [music festival] wanted to create a hologram of my dad, they used my face.”

How Did Her Father Eazy-E Die? His Cause of Death

Eazy-E, the greatest rapper in the hip-hop world passed away on March 26, 1995. He died of AIDS-induced pneumonia. Talking about his age at the time of his demise, some sources say that the artist was 30 while others reported Eazy was 31.

A month ago his death, the rapper was rushed to the Cedars-Sinai Medical Center in Los Angeles in Feb. He made his illness public a few days before his death on 16th March.

He was interred at Rose Hills Memorial Park in Whittier, California on 7th April of the year. Thousands of well-wishers were gathered for his funeral including Jerry Heller and DJ Yella.

Needless to mention, it always becomes hard for everyone when you don’t have a father figure from an early age. But, in the case of Erin, the successful career her father had influenced her a lot in every aspect of her life. She wants to follow her father’s career paths and share the popularity her father had.

Erin is more interested in pop rather than rap. She also wants to launch a hat line and use her early fame including the initial 15 minutes of appearance on MTV’s My Super Sweet 16 into bigger showcases for her projects.

Wright released her first song called ‘Girl Crush’ in 2015. After some time, the promising singer also came with an extended play record, ‘We Want EB.’

On the other hand, Erin has a YouTube channel called ‘Ebie.’ It has amassed 3.18k subscribers as of 2021.

Who is Erin Wright Mother? Is a Partner With Her Mom at Eazystreet Entertainment LLC

E.B. Wright works with her mother Tracy at Eazystreet Entertainment LLC. They both serve as co-executive producer for the TV Docu-Series called A Ruthless Scandal that highlights the surrounding of Eazy-E’s mysterious and untimely death in 1995.

Erin aka Ebie is a sports enthusiast too. She along with her mother started Ebie Sports. Furthermore, they have a plan to open a Fashion line called Ibie Ober Clothing. Besides, she is also a founder of the clothing website We Want EB.

The family war for the role of Eazy E in the NWA biopic ‘Straight Outta Compton’ started when her half-brother Eazy’s son, Eric Wright, Jr. told TMZ about his most probability in the role. A few days later, Erin herself put her own opinion on the portrayal, saying,

“I feel the role of my dad in a biopic should Not just be a ‘given’ to my brother Lil Eazy solely on the strength that he is my father’s junior! To be honest my father has 4 sons total who all resemble him in their own way, just as I have an uncanny resemblance to my father and I am a girl. I think my brother should have to audition and earn the role by delivering a great read instead of just being handed the role—and I’d like to add that I feel I should have that same opportunity to audition for the role as well, and be given equal consideration based on my acting ability and not just my relation.”

Eazy’s daughter further added, “I have dreamed of getting this role for many years now.”

But, eventually, the then-newcomer Jason Mitchell got the opportunity to play a great role in the movie directed by F. Gary Gray. It shows the ups and downs of the gangsta rap group N.W.A.

Erin also praised the performance of Mitchell in the mega-hit movie. She said,

“He did a phenomenal job. I’m so incredibly proud. All my life I’ve been hearing these stories. Jason is everything I imagined [my father] to be … I really felt like I was watching him on the screen.”

Wright has ten-half siblings from her father’s different relationships including Lil Eazy-E, a musician, and HIV activist. Her half-sister ReeMarkable is also a musical artist.

Do you know Rapper Ice Cube’s Daughter Karima Jackson? Here’s All The Details

What about Her Love Life?

Erin isn’t dating anyone officially at present. She might be in a secret relationship but has kept her love life out of the public eye. She currently resides in Beverly Hills with her mom.

As per sources, her fortune is $200,000. She mostly makes her money from her music career and many other works. Besides, the net worth of her late father was $50 million at the time of his death.