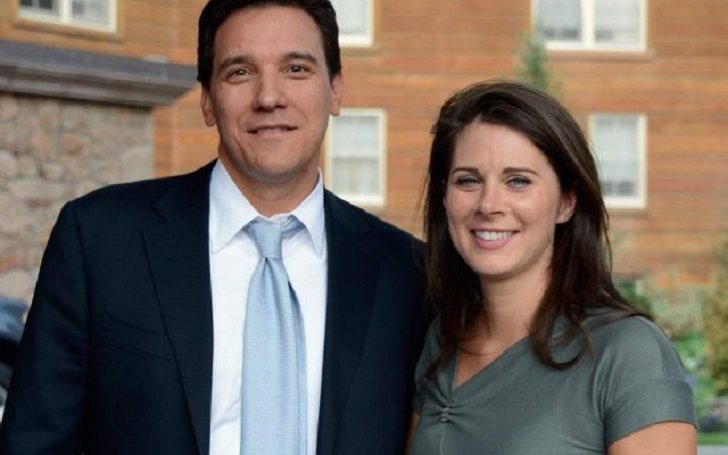 One of the prominent on-air personalities Erin Burnett has been leading a blissful married life with her managing-director-husband. The two are together for over one and a half-decade and they are still in love with each other as they used to at the beginning.

What’s the secret to their endearing relationship? Here is the adorable love story of the iconic couple and some tidbits about their kids and other hidden truths!

Erin Burnett’s married life with Her husband David Rubulotta: How it all began?

Burnett tied the knot with David Rubulotta in late December 2012. Their wedding took place at New York City Hall which was officiated by a justice of the peace. The two exchanged their vows in front of their families and friends.

The bride opted for a red dress for her marriage and changed into a gold gown made by Carmen Marc Valvo couture for the reception at Atlantic Grill in New York City. Erin planned the party all by herself and even hired a classical guitarist to play Christmas carols.

The journalist, while talking about the timing of their wedding, told People Magazine,

“Christmas is our favorite time of year. We thought it would be the perfect time to get married.”

“I was overflowing with joy to have those I love together”

The two shares the same philosophy towards life and that is probably the thing that played a major role in their enduring married life.

Burnett and Rubulotta first met on a blind date

Erin met her then future-spouse David on a blind date back in 2004. While recalling the moment Burnett revealed when she walked into the restaurant for the date and saw Rubulotta, she subconsciously thought, ” I hope that’s him.” And to her luck, it was him.

Back then, Erin was a stock editor for Bloomberg which was also her first job in the media. She previously worked as a vice president of the digital media group, CitiMedia.

Before making her transition into journalism, Burnett also worked as a financial analyst for Goldman Sachs, an investment banking company.

The couple got engaged just a year before their marriage

Erin and her then-boyfriend David dated for several years and got engaged in August 2011. News of her engagement first came out when she organized a launch party promoting a new CNN show Erin Burnett OutFront in September of the year. At the event held in the Museum of Arts and Design in New York, Erin’s ring finger had a visible engagement ring.

Erin and her hubby David are proud parents of three kids. The couple welcomed their first child, a baby boy, Nyle Thomas Burnett Rubulotta on 29th November 2013. He weighed 8 lbs., 10 oz at the time of his birth. Initially, she announced her pregnancy back in June of the same year.

Upon the arrival of her first bundle of joy, the host told People,

Their daughter Colby Isabelle Burnett Rubulotta was born in July 2015. In Feb of the year, the couple had announced they were expanding their brood once again, and indeed they did. Erin posted the first photo of their baby girl on Twitter on 30th July 2015.

Further growing a family, Burnett gave birth to their third child, a baby boy, Owen Thomas Burnett Rubulotta on August 20, 2018. The on-air personality announced she was expecting her third child with husband David in March.

The journalist currently lives in an apartment on Broadway, New York City with her spouse and three kids. Sources report the flat has 2 bedrooms and 2.5 bathrooms. It also boasts a swimming pool, fitness club, and a parking garage.

Rubulotta is a managing director in high-yield sales at Citibank. He previously worked for Lehman Brothers in trading. The then fourth-largest investment bank in the U.S., however, filed for bankruptcy in 2008.

He attended Villanova before obtaining his MBA from Columbia Univesity in 1998.