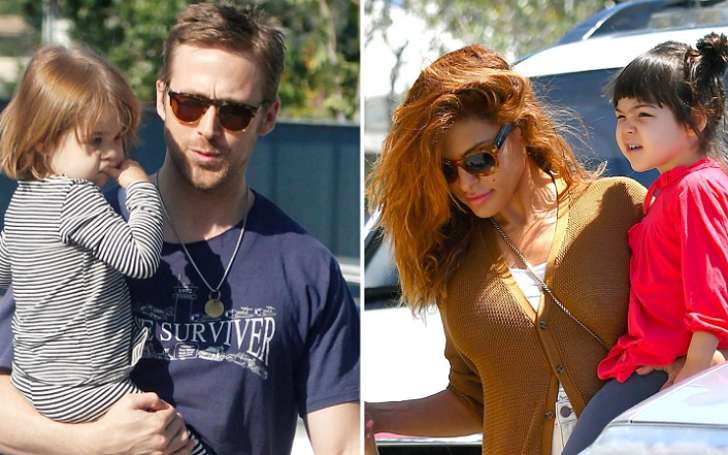 One of the Hollywood iconic couples Eva Mendes and Ryan Gosling are proud parents of two kids. However, the two have kept their children totally out of the public eye.

Here we are going to explore everything about their second child Amada Lee Gosling. The little girl is now enjoying a very low-key upbringing with her sister.

Also, know about her relationship with her high-profile parents. Did they ever get married, or are just dating?

Who is Amada Lee Gosling? Her Early Life

Amada is a famed star kid who was born on April 29th, 2016, in Santa Monica, California. The 5-year kid is now spending her childhood pretty secretly with her parents. Despite being the daughter of acting stars, Amada’s public appearances can easily count.

Her Parents Eva Mendes and Ryan Gosling Relationship: Are They Married?

Amada Lee’s parents have been enjoying a delightful relationship for around a decade now. They started their love affair back in 2011. Ryan first came across his future girlfriend Eva while filming the movie The Place Beyond the Pines (2012). The couple played boyfriend and GF in the movie. The then on-screen couple also has a son named Jason in the movie.

As time passed, their chemistry on reel slowly started blossoming outside the camera too. They subsequently hit it off. The power couple is dating for years now but has kept most of their love life behind closed doors.

Apparently, many of their fans are also curious to know if the two got married. However, the answer to the question is not. According to sources, the two were said to tie the knot in the summer of 2020. But, no updates on their possible marriage has come out to date.

Besides their prolific career in show business, Ryan and Eva are also super successful in keeping their private life to themselves. Just like their first pregnancy, Mendes and her longtime partner didn’t leak a single clue about expecting a second child until a few weeks before their daughter was born.

The news of Eva and Ryan’s expecting another daughter swirled on the web when the actress was seen running in L.A., trying to cover her baby bump with a tote bag.

As per the birth certificate obtained by TMZ, the couple welcomed their second kid on April 29th at 8:03 AM, at Providence St. John’s Health Center.

Her sister Esmeralda Amada Gosling was born on September 12, 2014. It was confirmed in July of the year that Ryan and his girlfriend Ava were expecting their second child. She made a rare public appearance throughout her pregnancy and even while going out she covered up her baby bump with several pieces of clothing and a large bag.

Amada is actually Eva’s grandmother’s name. It means “beloved” in Spanish. It is the first name of Eva’s second daughter and the middle name of her first daughter Esmeralda.

Talking about choosing the name of their second baby girl, Mendes told,

“We had a few names picked out for our new baby, and when she was born, we didn’t feel like those names were her. We came up with a few more, even that morning, and tried them out. We were like, ‘What about Viviana?’ But we just kept going back to Amada.”

Amada Lee Gosling and Sister Esmeralda Are Great at Spanglish

Ryan Gosling’s longtime partner, Eva Mendes is of Cuban descent and is also trying to teach her kids Spanish. However, in an interview with CBS’s The Talk, Mendes revealed it appears her children are great at Spanglish. She said,

I’m Cuban and we’re trying to teach the kids Spanish, and it’s harder than I thought. I speak Spanglish and that’s what they’re picking up. So it’s adorable but it’s technically not a language. It’s Spanglish.”

The Other Guys actress posted a video of herself playing music on a record player on her Instagram in March 2020. She showed off her little daughter Amada’s piano-playing skills on the clip and captioned it,

“Trying to keep things light at home with my two little ones. Nothing like some old Cuban music to do the trick. And yes that’s my 3 year old on the piano.”

“I think she thinks the music is coming from her. And I’m not about to correct her.”

Nonetheless, Amada a fast learner didn’t feature on the video. After listening to her amazing talent, several fans praised the doting mother and her daughter in the comment section. One fan wrote, “What a great accompanist! Music heals!!”

She is the granddaughter of Thomas Ray Gosling and Donna from her father’s side. Her old papa was a traveling salesman for a paper mill while her grandma was a secretary. They both were of French-Canadian descent, along with some Scottish, Irish, German, and English.

On the other hand, her maternal grandparents are Eva Pérez Suárez and Juan Carlos Méndez. They both were from Cuba. Eva used to work at Mann’s Chinese Theatre and Juan ran a meat distribution business.

Born and raised in London, Ontario, her dad Ryan initiated his acting journey with a role on Disney’s Channel’s The Mickey Mouse Club (1993–1995). He later appeared in numerous independent movies until making his major breakthrough playing a leading role in the box office hit romance The Notebook.

He gained the first nomination for an Academy Award for Best Actor after his role as a drug-addicted teacher in Half Nelson (2006). His other triumphant movies are Lars and the Real Girl, The Big Short, La La Land, and more. The actor got the second Academy Award nomination when he played in the black comedy The Nice Guys in 2016.

Talking about Amada’s mother Eva, she is also one of the prominent faces in Hollywood. She gained a huge recognition for her acclaimed performance in Training Day (2001). Her performance on the project also paved her way for many other hard-hitting movies like 2 Fast 2 Furious (2003) and Hitch (2005) as well.