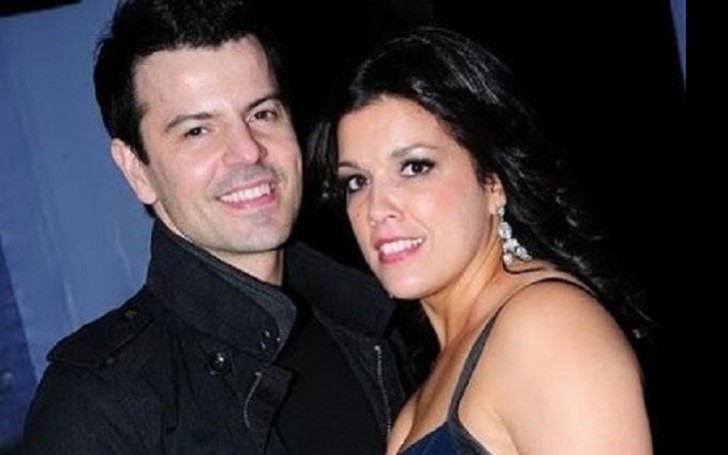 Evelyn Melendez has been in the spotlight following her marriage to Jordan Knight, the lead singer of New Kids on the Block. After the band dissolved, Jordan has enjoyed immense success as a solo music artist with dozen of hit albums and singles.

But, as for their relationship, it has remained strictly undercover for the most part. Let’s know if the couple has any kids?

Jordan Knight’s year-long marital relationship with wife Evelyn Melendez? How it all began?

Evelyn Melendez married Jordan Knight back on September 12, 2004, in a very private wedding ceremony. In April 2019, the singer told ET that he sang the song ‘I’ll Be Loving You (Forever)’ at their 2004 wedding.

Talking about how he went on to sing the beautiful melody on his wedding night, he said,

It was kind of impromptu. There was a piano on wheels and a friend of mine pushed it in and was like, ‘And, now Jordan’s going to sing, ‘I’ll Be Loving You (Forever)!’ He put me on the spot, so I sang it.

Moreover, the singer, recalling the moment, also gladly mentioned his then new-wife Melendez loved the performance too,

She loved it. When I was singing, I was really feeling it and meaning it, so I think she knew that. We both cried and it was definitely a beautiful moment.0

The couple has remained tight-lipped about their relationship keeping everything to themselves. As per sources, the two first met back in the mid-1990s. They dated for several years before tying the knot in 2004.

But lately, there had been rumors of their separation which seem baseless. Check out in detail below.

Are Evelyn and Jordan still married? Their Separation Rumors

Yes, Jordan and his wife Evelyn are still together. Although some tabloids say the couple separated but there is no valid information about their alleged split.

Furthermore, in an above-mentioned interview with ET, Knight positively talked about his wife. In fact, the artist seemed as glad and as proud of the song he sang for his wife.

Moreover, he also mentioned how singing ‘I’ll Be Loving You (Forever)’ even after several years in 2019, he still has the same energy and feeling that he had during his nuptials to Melendez in 2004.

He told, “I honestly feel the same way performing it now as I did then.”

Keeping all these into consideration, it is pretty evident that they are still married and rather happy as a couple.

They are blessed with two kids

In the meantime, Jordan’s solo music career was taking off. The then-new-father had to divide his time between parental responsibilities and his pop career. It was a tough situation for him. At the same time, the singer was also going through a bad drinking habit. Knight told that his then-girlfriend Evelyn supported him all the way through.

Despite his famous father, Dante enjoyed a low-key upbringing. Jorda has never posted a single photo of his wife and kids on his social media accounts.

NKOTB MUSIC Warriors uploaded the photo with his father on Twitter in August 2016.

The couple became the parents for the second time after their son Eric Jacob Knight was born on February 21, 2007. He weighed 7 lbs, 5 oz.

Some people have to work hard to be a success and some lucky ones gain wide popularity just for their strong family background or their high profile relationship. The latter can be said for Evelyn Melendez who attracted huge media attention being the wife of Jordan.

Her Early Life and Bio

Evelyn Melendez was born and raised in the United States of America. As far as her ethnicity is concerned, Melendez is Caucasian and her nationality is American. However, the details of her date of birth and parents are yet to be disclosed.

Evelyn Melendez currently resides in their house located in Milton, Massachusetts along with her hubby and children. They bought the mansion that features 3 bedrooms and 2.5 bathrooms back in June 2020 for around $575,000.

Jordan Knight was born on May 17, 1970, in Worcester, Massachusetts. He grew up in a large family as the youngest of six children. He used to play youth baseball league in Dorchester as a child.

Jordan joined New Kids on the Block in 1984. Other members of the band include his own older brother Jonathan Knight and Joey McIntyre, Donnie Wahlberg, and Danny Wood. Donnie’s brother Mark Wahlberg was also previously part of the band.

The group released their debut eponymous album in April 1986. It wasn’t such a hit but their second album Hangin’ Tough went viral obtaining worldwide popularity in 1988. The record also features the singles like Cover Girl, Didn’t I (Blow Your Mind This Time), and more.

Nonetheless, NKOTB disbanded in 1994. They reunited in 2008 and released their album The Block in September 2008. It peaked at the 16th number of Top 25 Teen Idol Breakout Moments list made by Rolling Stone.

Jordan also made several major stints in the music world as a solo artist. His major success solo third album called Unfinished (released on 31st May 2011) went No. 8 on the US Billboard Independent Albums chart.

Furthermore, Knight was also featured on the British show Hit Me Baby One More Time and in a documentary Trust Me – I’m a Holiday Rep.

What is Jordan Knight Net Worth?

Jordan Knight has collected a large amount of his wealth from his splendid career in the entertainment industry. As per estimation made by Celebrity Net Worth, the singer has $18 million.