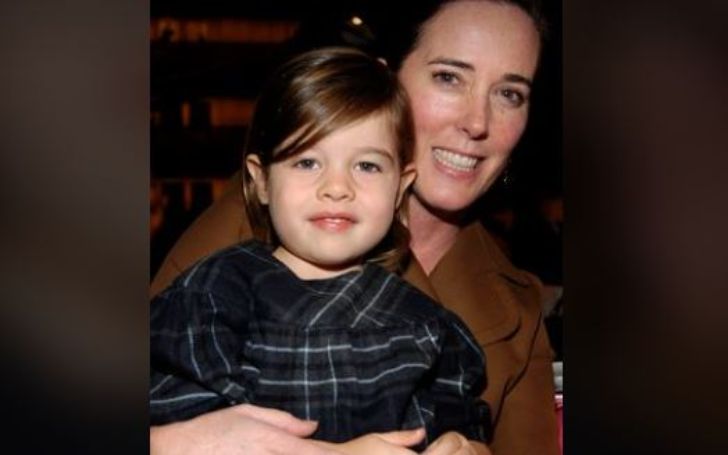 To the outside world, Ms. Spade, the woman behind the eclectic-yet-practical handbags was a fun-loving and exuberant fashion journalist. She created an international empire of design and a huge fashion empire alongside her partner, Andy.

Frances’ mom’s unexpected death “shocked the fashion world.” However, years after her death, a series of new questions still pop up time and again; each of them asking from her daughter’s whereabouts to what happened to her past and present companies.

Know all of this along with fullest readouts about Frances Beatrix Spade in the ensuing headings.

What Is Frances Beatrix Spade Doing These Days?

Kate Spade and Andy Spade’s daughter, Frances who was born on February 18, 2005, is currently 16 years old.

In the last few years, however, there hasn’t been much talking about Katherine and Andy’s only child. It thus stays an unteased matter regarding how Beatrix is doing these days.

Some sources, nonetheless, report the youngster resided in California with her father.

While she may not be that active on social media, Bea at least has her own IMDb page, which includes her two two film roles.

She played a minor role in the 2008 film, The Pleasure of Being Robbed. The film was produced by her father, Andy Spade. Another film Bea was in was a short movie, The Black Balloon in 2012.

Andy and Kate had been together for 24 years until the latter’s passing in 2018. They met each other while they were both in college. The former couple, Katherine Brosnahan and Andy Spade grew up in Kansas City, Missouri.

Frances’ parents married in 1994. This was a year after they had launched Kate Spade, New York.

From mocking up her first handbags on tracing paper, Kate and her husband, Andy grew their business from inside their small Manhattan apartment to stores and offices worldwide.

Sources claim they had split in the months leading up to her death, while TMZ said he had moved out of the family home.

While they were living apart for the last 10 months before the incident, Andy, in an interview with The Times, said there were no plans to divorce.

Frances’ Mother Died In Her Home In Manhattan

It was the housekeeper who found Frances’ mother’s dead body at her Manhattan home on Tuesday morning, June 5, 2018.

She had hung herself, dying alone in her apartment. The New York-based businesswoman was then 55-year-old. The help who discovered Spade’s body reportedly ran downstairs to inform the building’s superintendent who rushed back to the apartment, cut the scarf around her neck, and attempted CPR.

Shortly, the police arrived and promptly characterized the death as suicide. NYPD Chief of Detectives Dermot Shea at the time told reporters there was a note from Frances’ mother that supported the theory of suicide. The police also said Kate’s husband was at the apartment when his wife took her own life. At the same time, Frances was then in her school.

With her death, Kate Spade was the latest in a long list of designers who died tragically and suddenly, such as Alexander McQueen, Gianni Versace, Maurizio Gucci, Manuel Mota, Christian Dior, among others.

Sometime later, a short docu-film, The Last Hours of… Kate Spade aired on July 11 at 9 PM ET/PT on the network, REELZ.

Before Dying Frances Beatrix Spade Mother Left Her A Note

Before dying, Andy’s wife did leave some wise words of advice for her daughter.

The fashion designer apparently told her teenage daughter not to blame herself for her suicide. Andy Spade, however, revealed neither he nor anyone else in the family got to see the suicide note of his deceased for themselves but read about it in media accounts.

He expressed dismay, for a private message to his daughter, spreading across the media heartlessly. As for what the message said, the police reported it was Kate telling her daughter to ‘ask daddy.’

The note reportedly included the statement,

‘Bea – I have always loved you. This is not your fault. Ask daddy!’

Why Did Frances Beatrix Spade Mother Kill Herself?

Before her tragic death in June 2018, Frances’ mother reportedly was suffering from anxiety and depression.

She allegedly though never showed any signs of suicide, reported her husband, Andy Spade. Andy revealed his deceased wife had bouts of anxiety during their relationship and 24-year marriage, and serious episodes of depression began about six years before her death.

“Kate suffered from depression and anxiety for many years. She was actively seeking help and working closely with her doctors to treat her disease, one that takes far too many lives,”

He also said they were in touch with her the night before and affirmed she had sounded happy but there was no indication and no warning she was going to take her own life.

How Her Mother Started A Multimillion-Dollar Company?

During college, Kate Spade used to work at a clothing store. The Missouri-born apparel expert didn’t have any formal training prior to launching her business. She was working as an accessories editor at Mademoiselle magazine for years before starting off her eponymous brand, Kate Spade New York with her husband in 1993. They first provided handbags.

Beatrice’s folks gradually expanded from bags to shoes to women’s clothing to accessories and even stationery. Some time afterward, their company went on to grow into a full-scale clothing and jewelry line.

By 2004, Kate and her spouse had launched international and home lines. Spade and Andy, however, would sell the business in 2006 to focus on their family especially their only daughter, Frances.

In fact, Neiman Marcus had purchased 56 percent of the company in 1999 and the remaining 44 in 2006. Explaining her then break, Ms. Spade said,

“Some people can make it work beautifully. Every woman makes the decision that’s right for her. But I felt like for me, this was the way to do it.”

She also said the nine years break was good and that her daughter absolutely adored every moment of it. The Kansas City-native would return back to her line of work once she realized Frances was becoming 12 and didn’t want her around so much.

In a 2016 interview with Wall Street Journal, Kate spoke about how even though she had returned to the world of fashion her daughter was still her priority. About her decade-long absence, Noel Brosnahan said it was unbelievably amazing, “like, a gift. I really did.”

She also confessed how when back at work, it was her only child that made work a more delight.

Frances Beatrix Spade is also the niece of actor/comedian, David Spade. Her father, Andy Spade, is the brother of comedian David.

In like manner, Beatrix is also the cousin of The Marvelous Mrs. Maisel actress, Rachel Brosnahan. Brosnahan was the niece of Frances’ mother, Kate.

While her former company, Kate Spade New York is worth billions today, Kate Spade’s net worth at the time of her death was reportedly around $150 million. The figure today has risen to a little above $200 million.

And although the specifics of how and what amount of that is for Frances remains to the Spade family only, it’s pretty understandable that Kate’s daughter is to inherit a ridiculously huge sum once she stepped into adulthood. In a way, she is already the owner of at least $100million plus net worth.

Not to mention, she also has money coming in from Frances Valentine (launched in 2016) which her mother co-owned with Elyce Arons.

Worth remembering is in the case of Gianni Versace, his niece, Allegra Beck inherited 50% of his line. But for this to happen, Beck’s mother, Donatella Versace, also Gianni’s sister had to take over the company.