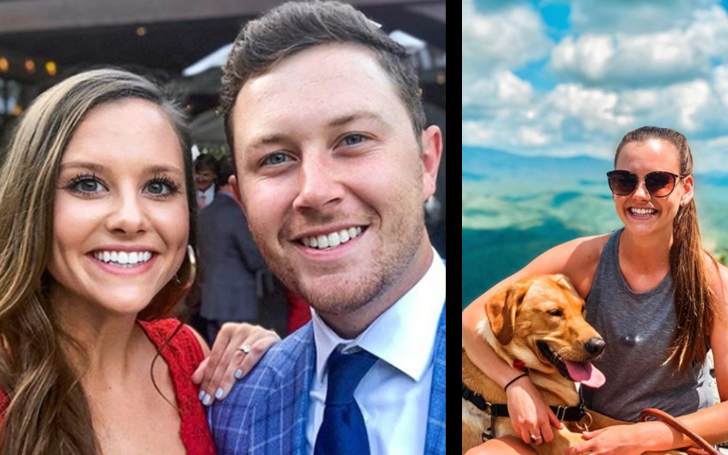 Gabi Dugal is a pediatric nurse who is famous for being the wife of the American country music singer Scotty McCreery (aka Scott Cooke McCreery). Her husband, Scotty is best known as a winner of the tenth season of American Idol held on May 25, 2011.

As of 2022, Gabi has been married to her now-husband for 4 years and soon the nurse is also going to be a mother. Talking about her relationship with Scotty, it was not of short time. In case, if you don’t know, the now-couple knew each other since their kindergarten days. If so, then, when they started dating each other?

Today, this article intends to explore the interesting love story of Gabi Dugal alongside her wedding with her longtime partner McCreery, her pregnancy news, her job as a nurse, and more. Read the full article.

Gabi Dugal Is Originally From North Carolina: What is Her Age?

Scotty McCreery’s wife, Gabi (pronounced, guh-BEE) was born on April 9, 1994, in the Wake County of Garner, North Carolina, the United States. As of 2022, she is 28 years of age and has a birth sign, Aries. Dugal grew up in her hometown alongside her parents and an elder sister named Paige Dugal Arve.

Similarly, as for education, she went to Garner High School. For further study, Gabi enrolled at the University of North Carolina at Chapel Hill and graduated with a nursing degree in the year 2016.

Besides, Gabi belongs to the white ethnical background and is American by nationality.

What Does Gabi Dugal Do For a Living? Her Job As a Nurse

As aforementioned, Gabi studied nurse and graduated in the year 2016. Right after her graduation, she started working at Duke Hospital. After she was recruited to the Duke, Gabi Dugal posted a celebration post on her Insta account on March 8, 2016, by captioning,

Today has been an awesome day!! I officially accepted a job to be a nurse on the Pediatric Cardiac ICU unit at Duke Hospital! Getting the best of both worlds with the two things I love most in one: living out my passion for kids and being a nurse!

Since then, Dugal has been doing her nursing job at Duke and as per her Facebook info, currently, she is at Pediatric Bone Marrow Transplant Unit at Duke Children’s Hospital.

Similarly, she also has a working experience in a non-profit organization named Poole Family YMCA, situated in Garner, North Carolina.

Dugal Has Appeared in Music Video As Well

Being the wife of a singer, Dugal, a pediatric nurse also has had a handful of appearances for her husband McCreery’s music videos like “The Trouble With Girls,” “Feelin’ It” and “Five More Minutes“.

Further, she has also featured in the music video titled ‘This Is It’ which displays glimpses from her wedding with McCreery in a documentary style. Regarding the music video, her partner said,

“They did a great job with capturing all the emotion, “I hope fans see how fun of a wedding it was. There are moments when you see me all emotional, and Gabi smiling and showing all 32 of her teeth.”

Gabi Dugal Is Married To Her Husband Scotty McCreery: Detail On Their Wedding

On June 16, 2018, a North Carolina native, Gabi tied the knot with her American Idol winner husband Scotty McCreery. Their wedding was held at Twickenham House & Hall at Blue Ridge Parkway in North Carolina Mountains. Gabi and her hubby McCreery shared their vows in front of more than 200 people and their marriage was conducted in the presence of Scotty’s childhood pastor.

Further, their wedding venue was decorated with a black, white, and gold color scheme. Regarding the venue, Gabi said to People,

“I kept it very classic, “I went with greenery and white flowers, some lanterns and candle votives [for a] rustic feel. We fell in love with the mountains during the summertime [when Scotty proposed], and our [venue] is like a little castle in the woods.”

Both the bride and groom wore the bridal dress from Morilee Madeline Gardner and the ceremony took place for 3 days, starting on Thursday when their close ones had a get-together for a Cajun-style shrimp boil feast. The day after, on Friday, they had a rehearsal dinner, and lastly, on Saturday, they got married.

Gabi And Her Now-Husband Dated For 6 Years: How Long They Knew Each Other?

Before marriage, the couple was in a relationship for 6 years. In fact, Gabi and her then-boyfriend Scotty McCreery are high-school lovers. However, their high school was not the place where the now-married couple met for the first time. Actually, Dugal and her spouse Scotty had their first crossover in kindergarten.

Since her kindergarten days, Gabi seems to be infatuated with her future husband. In an interview with Harry Connick on Jr.’s talk show, McCreery told,

“She’ll kill me for saying this, but in her kindergarten diary, she had ‘Mrs. Gabi McCreery’ written in hearts all over,”

After a decade, the couple again met in high school, eventually fell in love with each other, and started dating. In this regard, Scotty further said,

“We’ve been dating six years and have known each other our whole lives. That kind of story doesn’t happen too often nowadays,”

As said by Dugal’s lifetime partner, this kind of love story truly doesn’t happen often. The duo engaged in September 2017 and the rest is known to all of us.

Dugal Is Pregnant With Her First Child With Her Husband

After 4 years of marital life, Gabi announced her pregnancy on June 21, 2022, by sharing her photo with a baby bump and ultrasound baby reports in her hand alongside her husband.

Both couples are very excited to welcome their baby boy in November. While sharing the good news with People, Scotty told,

“We’ve gotten to live a lot of life and do some cool things, so seems like now’s a good time to settle down a little and expand the family.”

Seeing this statement, we can say the adorable duo is fully prepared to enjoy parenthood.

Gabi Is A Pet Lover

Gabi’s Instagram suggests that a soon-to-be mom is also a mommy to her pet dog named Moose. Almost in every important family event, the presence of her pet Moose is important. On her social media, she often uploads her pictures with Moose.

From Halloween to announcing her pregnancy, we get to see Moose in the picture alongside the McCreery couple which means that her pet is not only a pet but a member of her family.

Is Active On Social Media

As per reports, Scotty McCreery’s wife Gabi has a net worth of $500,000. Her major source of income is her profession of nursing. On the other side, her spouse, McCreery has a fortune of $4 million as of 2022.

At present, Dugal lives in her husband’s house located in Garner, North Carolina.