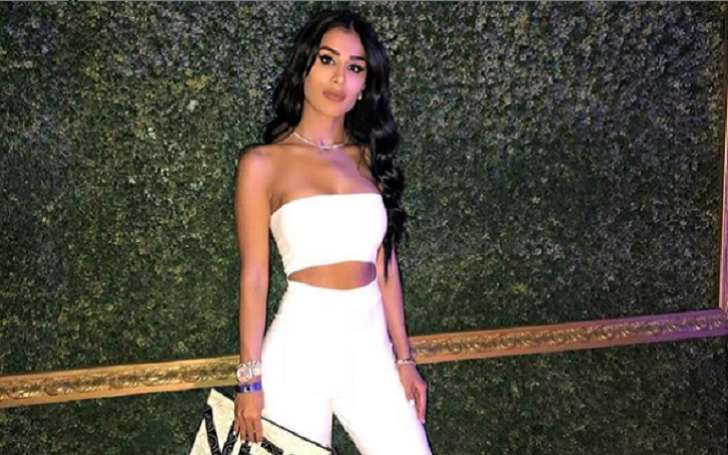 Gabriella Waheed (also known as Gabriella Sanders) grabbed attention as the estranged wife of Emmanuel Sanders, a football wide receiver for the New Orleans Saints. The couple previously went through some very public ups and downs but things now seem pretty comfortable between the two.

Waheed is a fashion designer and has also modeled for several big brands. But, several of her fans still don’t know everything about the model.

So, here we will try to find out many interesting facts about Emmanuel Sander’s wife, Gabriella!

Gabriella Waheed and husband Emmanuel Sanders married in 2014: How did they first meet?

The couple tied the knot in 2014, the same year, Emmanuel signed a three-year contract with Denver Broncos. Looks like the year 2014 was quite lucky for Sanders.

The duo had reportedly walked down the aisle after years of dating. Sources suggest the two got engaged in 2013.

The couple has not told how they first meet, however, their social media accounts suggest they are dating since 2011. Both Gabriella and Emmanuel have posted a number of photos of themselves on their Facebook page back in 2011 and 2012.

Emmanuel has two kids with his wife

The pair is blessed with two kids. They welcomed their first child, a son, Princeton Emmanuel Sanders, two days after Valentine’s Day on 16th Feb 2014.

Initially, Emmanuel’ wife Gabriella announced she is pregnant after sharing a picture of her growing baby bump on late 21st December 2013.

The two became the parents for the second time when their baby girl, Zoie, was born in late 2016.

Are They Still Married? Emmanuel Sanders’ Wife Once Filed for Divorce

The couple also had a fair share of drama in the past. They became the center of the media after Gabriella filed for divorce in October 2016, citing a “discord or conflict of personalities.” She also made several shocking claims about her wide receiver husband.

“When he’s not playing football on the field, he ‘plays the field’ with numerous women whom he is or has committed adultery.”

Gabriella Sanders also claimed Emmanuel lied to the Denver Broncos in November 2016, saying he was going to attend the birth of his newborn daughter in Houston but he instead went partying. In Feb 2017, Gabriella claimed he once even gifted a car to a girl in her petition filed in Texas.

The fashion designer had already received a temporary restraining order against him at the time. Despite all that, Sanders himself shared a photo of his newly-born baby girl with his wife and son from the hospital in December 2016.

The then supposed to be zero chance of a reconciliation turned just opposite and the little family unit is still going strong. They both frequently shared adorable family photos on their respective social media accounts.

The model launched a children’s clothing line called Kid Kong NYC in 2017. She told Wags Redefined at the time of its initiation her children helped to open the business,

“My obsession with making sure my own children were always fashionably radiant brought my attention to the lack of trendy, stylish, neutral-colored and designed clothing in the kids’ fashion market, especially for boys.”

You can also see that Gabriella’s Instagram is filled with photos of her children, promoting the fashion market of kids. Let’s take close look at her matching designer outfits with her daughter.

Little girls are gifts from heaven

The brand is described as “high-end streetwear” which includes a wide range of child products.

Who is Emmanuel Sanders Wife? Has Three Siblings

Gabriella Waheed was born on 12th Feb 1988, in Flushing, New York to Waheedullah Waheed. She grew up with her three siblings; two sisters, Sabrina and Galaxy as well as a brother Adam Waheed.

They all are popular on Instagram especially their brother Adam has over 2.4 million followers. He is a film producer who previously played football at Commack High School. He later went to Southern Methodist University to play football as a defensive back.

Gabriella went to Commack High School. After her schooling, she graduated from Marymount Manhattan College. Later on, she began working in film and television productions.

The celebrity spouse had always interested in the fashion world. She previously served as a wardrobe stylist on Viacom’s music videos and commercials. The fashion designer subsequently began working with her private clients.

Gabriella has also worked as a model for several well-established companies such as Chanel, Luis Vuitton, Fendi, Balenciaga, and many other brands. Furthermore, Waheed has modeled Bikini Crush Swimwear. She often shares her promotional posts on her Instagram where she has 583k followers.

Gabriella Sanders’ net worth is $500,000. And her husband Emmanuel Sanders’ fortune stands at $6 million.

Other Quick Facts of Gabriella Waheed