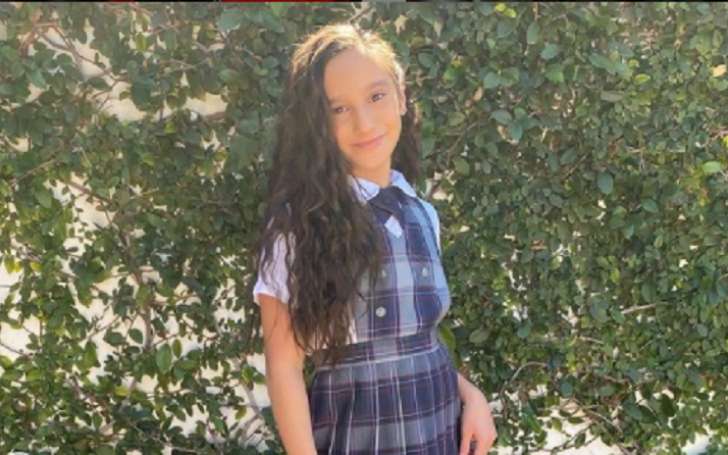 Gia Francesca Lopez is the daughter of Mario Lopez, an actor, and TV host. Her father is widely known for his portrayal of A.C. Slater in the TV sitcom Saved by the Bell and Saved by the Bell: The College. Further, Mario grabbed fame for his role as a host in America’s Best Dance Crew and in a few other TV shows. In the meantime, Gia’s mother Courtney Mazza is likewise an actress who spent most part of her career performing on Broadway.

Well, like her parents, Gia has also shared the same love for acting and has already made a dozen of TV appearances to date. She often appears with her parents on their music program ON With Mario Lopez that features a variety of entertainment stories and celebrity interviews too.

Furthermore, Gia who is already on the way to stardom has also deserved credit for her voice work on the TV series Elena of Avalor. In addition, the article will include Gia’s parents’ enduring marriage, her siblings, and many other facts. To know all about the star kid, stay with us!

Who Are Gia Francesca Lopez Parents?

We have already mentioned earlier that both of Gia’s parents Mario and Courtney are actors. Unlike her father’s wide recognition in the industry, her mother isn’t a regular face in the media. She initially worked in Broadway shows like  A Chorus Line, The Little Mermaid, and more. Besides, the Broadway star has also worked in TV series including Mario Lopez: Saved by the Baby, and Wendy: The Wendy Williams Show, among others.

As of 2021, Gia’s mom serves as a correspondent for Top Rank Boxing.

Gia Was a Flower Girl at Her Parents’ Wedding

Mario and Courtney have been sharing marital bliss for nearly eight years. The long-lasting duo tied the knot on 1st December 2012. Their star-studded wedding ceremony took place at the seaside estate of Joe Francis in Punta Mita, Mexico. There were about 200 guests who witnessed their nuptials.

For their meeting, the two first met when both of them were working on A Chorus Line in the fall of 2008. And Lopez proposed to his then-girlfriend over the 2012 New Year’s vacation to Ixtapa, Mexico.

When Was Gia Francesca Lopez Born? Her Birth Details

“We are so overjoyed. What an amazing, wonderful and overwhelming experience to welcome our daughter into the world.”

Over the period of Mazza’s pregnancy, Lopez was quite doting on his wife. He further said,

“I’m constantly trying to feed her because I want to have a really healthy, chubby baby.”

At the same time, Mario also revealed his plan to write a book, documenting his daughter’s life and his first-time fatherhood experience.

The Book Was Named After Gia Francesca

Just 16-days after Gia’s 1st birthday, her father released a book titled Mario and Baby Gia on 27th September 2011. The book chronicles the experience of Lopez being a father for the first time and his daughter’s life. And it was named in the honor of the actor’s daughter Gia Francesca.

Dominic, who was born via c-section named after his mom Courtney’s grandfather. 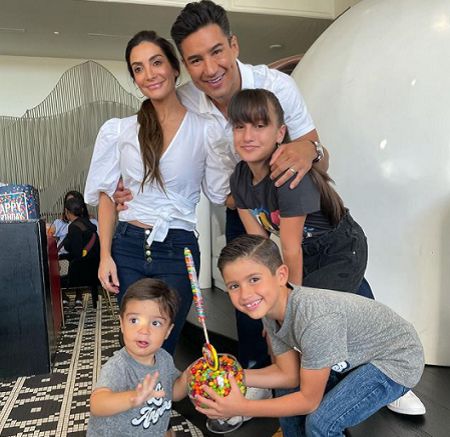 Lopez’s daughter celebrates her birthday on 11th September, two days after her younger brother Dominic’s born day. Back in September 2015, celebrating the double birthdays of Gia and Dominic, their parents gave them a Finding Dory-themed birthday party. It was attended by about 120 people.

In 2020, Gia commemorated her 10th birthday at her home with her parents. Her father wrote on his Insta,

“Happy Birthday besos to my little mija, Gigi! She’s growing up too fast, but I’m very proud of you and your kind heart … #HappyBirthday #GiaFrancescaLopez.”

Gia Francesca Lopez is a Caucasian as per her ethnicity. And her nationality is America.

Attends Catholic School: Know About Her Love for Painting

The star kid now studies in 5th grade at the Catholic School, whereas, her brother Dominic is in 2nd grade as of Sept 2021.

Besides, Gia enjoys painting. Back in 2021, the radio host Lopez posted a photo of his daughter, featuring her paint for her Nana.

She also loves to dance and has already danced with her dad at several of her school’s functions.

What is Gia Francesca Lopez Popular For? Her Work on Elena of Avalor

Although Gia is just 11-year-old now, the pre-teen Mario’s daughter has already performed in a handful of acting projects. As per her IMDB bio, the star kid first appeared in the short video The Disappointment of Jonathan Bender in 2012. She grabbed initial fame following her appearance in the TV series Extra with Billy Bush.

Her other TV credits include Big Star Little Star, Home & Family, and The Kelly Clarkson Show. The budding actress gained further fame after loaning the voice to the character Estrella on the mini-series Elena of Avalor: Adventures in Vallestrella. Gia also worked as a voice artist in Elena of Avalor. She provided the voice to two characters Young Marisa / Estrella on the TV series from 2016-20.

Furthermore, Mario Lopez’s daughter is better known for her work in Walk the Prank, Jane the Virgin, and more.

Her Frequent Appearance With Her Father ON With Mario Lopez

In addition to her TV appearances, Gia often pops up with her father on his four-hour music program and a radio station, On With Mario Lopez. The nationally syndicated radio show is a unique blend of entertainment stories and candid interviews with the hottest celebrities & artists.

Lopez’s daughter often appears on the show. And the doing dad never misses sharing the beautiful moment with his daughter from the station on his social media handles.

Gia is still in her 5ft grade and yet to involve in any kind of profession as a full-time employee. Then, how we can guesstimate her net worth at present. But talking about her father Lopez’s net worth, it now stands at $25 million. He is also paid a salary of $6 million a year.

The 11-year-old girl now resides in her parents’ house in Glendale, California.