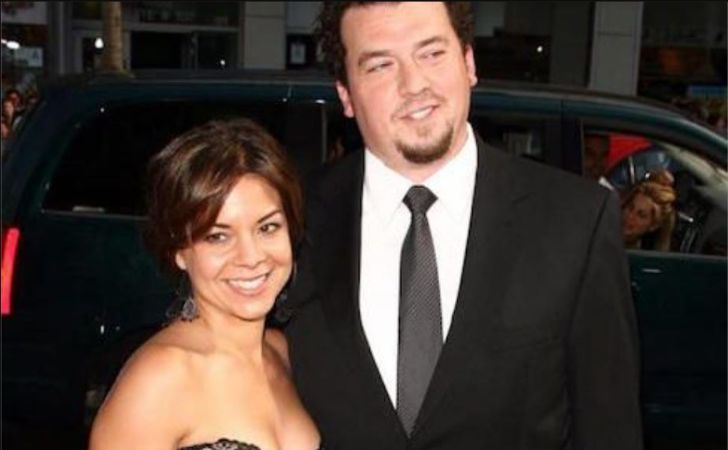 Gia Ruiz is an art director and screenwriter by profession. But her recognization hit the plateau after she married American actor Danny McBride in 2010. Like her husband, Gia is into movies for a long time and has even assisted her boyfriend turned husband Danny in several of his films.

Ruiz is leading a decent career in movies for a long time. But along with professional success, she is also enjoying peaceful family life. Along with leading a sound marital relationship, she is also a mother of two.

Well, in this article, we are going to explore all her personal and professional life along with details on her parents and other interesting facts. Be with us.

As we mentioned earlier, Gia Ruiz, born Gia Marina Ruiz, is an art director by profession. She was born on September 30, 1976, in Los Angeles, California. While she has not revealed much about her father, her mother’s name is Patrica Robles Ruiz.

As per our knowledge, Gia was born in a middle-class family and grew up with her family all the while she was in high school. However, things changed after she began pursuing her dream as an art director.

Ruiz Is A Screenwriter and Art Director

She began her career as an art director assistant for her husband low budget film The Foot Fist Way. As a fact, The Foot Fist Way is a comedy and martial arts film released in 2006 and directed by Jody Hill.

Later on, she also worked as an art department assistant and art department production assistant in the 2009 comedy series Eastbound & Down. She was part of the series in around 13 episodes from 2009 to 2010.

Apart from these, Gia has also been assisting her husband in screenwriting in many of his movies and TV works. Further, she also involves herself in behind the scene works in a lot of her husband’s movies.

The art director Gia is a married woman. She reportedly with her boyfriend Danny and married him on October 15, 2010. Their lavish wedding ceremony was held at Colony Palms Hotel in Palm Spring, California.

It has been over a decade since the couple is married and their wedding is going as strong as ever. Talking about the decision to tie the knot, the couple had been dating for years before they finally decided to walk down the aisle. But how did they meet?

The story about their first meeting is a bit interesting. As per Vanity Fair, the couple first met at the 2002 Super Bowl party. It was back when she worked with special-needs students at Los Angeles City College.

What began with professional proximity soon turned into romance and eventually into a marriage. They apparently dated for around 8 years before they walked down the aisle.

Ruiz Has Two Children With Danny

In a marriage that has already spanned over a decade, the couple has become the parents of two kids. They welcomed their first child, a son Declan George on Monday, Sept. 26, 2011, in Los Angeles, Calif.

Gia’s hubby had announced the pregnancy the same year in April, in a funny way. McBride who was 34 at the time said,

“I had never impregnated someone before, so I didn’t really realize what they teach you in health class is actually true.

Similarly, the couple welcomed their second child, a daughter Ava McBride in 2015. The family of four is leading a pretty decent life together. The family reportedly lives in Charleston, South Carolina, at present.

The Couple Is Into Philanthropy

Not many know but Gia and her Danny are actively involved in philanthropy works. According to the reports by the Medical University of South Carolina’s Board of Trustees, Ruiz and her actor-spouse donated a total of $45,000 to MUSC Shawn Jenkins Children’s Hospital, in the August of 2020.

Like we mentioned earlier, Gia’s husband Danny is a successful actor, writer, producer, and director. He was born on December 29, 1976, Daniel Richard McBride, in Statesboro, Georgia, U.S.

Talking about his movies, he made his acting debut in the 2003 film All the Real Girls. Ever since he has been part of numerous movies and TV works. Some of his successful film and TV works include Eastbound & Down, Vice Principals, and The Righteous Gemstones, Tropic Thunder, Up in the Air, Your Highness, among others.

Who Is Kris Brkljac? Untold Facts About Stana Katic’s Husband