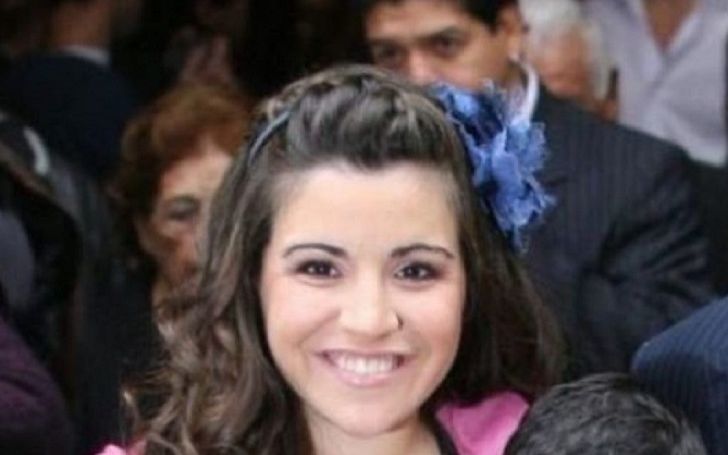 Giannina Maradona is the daughter of the late soccer player, Diego Armando Maradona and his then-wife Claudia Villafane. Her parents were married for around one and a half decades before they divorced in 2004. Giannina has an older sister, Dalma Nerea, an actress and Instagram model.

Besides, Gianniana attracted huge media attention following her marriage to former Manchester City striker, Sergio Agüero. However, the two divorced after four years of their marital relationship. But, after their separation, who is Giannina dating?

Let’s dig out everything about Diego Maradona’s daughter Gianina!

Maradona was born on 16th May 1989, in Buenos Aires, Argentina. She spent most part of her early days in her hometown of Buenos Aires with her family.

As far as her ethnicity is concerned, Giannina, who was raised in a Roman Catholic Family is a Latino. She holds Argentine nationality.

The beautiful Giannina is the daughter of Diego Maradona and Claudia Villafane. The former flames were engaged for years before they tied the knot on 7th November 1989, at a Buenos Aires wedding. They led a happy marital relationship for years before things started becoming complicated by the mid-2000s. Diego and Claudia eventually divorced in 2004.

But, they considered divorce as one of the best solutions to lead a healthy relationship as they remained friends for a long time. Since their separation, the then-divorced duo was spotted together on several vacations throughout the world. Together, they had attended Argentina’s games during the 2006 World Cup.

Giannina Maradona’s father died of a heart attack on 25th November 2020, at his home located in Dique Luján, Buenos Aires Province. He was 60-year-old at the time.

As per the reports, he was admitted to a hospital in La Plata back on November 2, 2020, primarily because of psychological reasons. He later went through brain surgery to treat a subdural hematoma and was discharged from the hospital on November 12.

Though he seemed to be recovering initially, he suffered a cardiac arrest on the 25th of November in his sleep at his residence in Dique Luján, Buenos Aires Province, Argentina.

The funeral was held the same day and he was buried at the Jardín de Bella Vista cemetery in Bella Vista, Buenos Aires, next to his parents.

Her Sister Dalma Nerea is an Actress

Her sister Dalma, born on 2nd April 1987, is a big personality in the Argentine entertainment industry. She is widely known for La venganza de Ira Vamp, Orillas, and more. She also has a decent fan following on her Instagram with over 1.7 million followers. Nerea also works as a fashion designer.

As for her education, Dalma attended the National University of the Arts, graduating with a degree in Acting.

Back in 2018, Giannina made headlines after her father accused his ex-wife Claudia and both of their daughters Giannini and Dalma of stealing $3.4 million pounds from his bank account. Later on, the legendary soccer player claimed that the whole stolen money was transferred to a bank account in Uruguay. He also said that most of his fortune was used to purchase property in several prime locations in the United States.

Two years after the alleged fraud, Giannina said they were even ready to go to court for the sake of reducing Maradona’s bad alcoholic habits. Talking to Argentine TV, Giannina said,

“I don’t have to expose my dad. If I do it, it will be in front of a judge, so it can be done judicially. I would not mind having to show judge photos and things from that day, but not on the television, to a judge.”

“I don’t tell him not to drink alcohol anymore. But he doesn’t enjoy it. That’s the point, not enjoying having a beer.”

Maradona married one of the Argentine ace players, Sergio Aguero in 2008, in a private wedding ceremony. The nuptials was attended by a few of their family members and colleagues. The same year, Aguero scored two winning goals in the semi-final match against rival Brazil at the 2008 Olympics.

A year after their wedding, the two welcomed their son, Benjamin on 19 February 2009, in Madrid. Her then-husband Aguero attended the birth of their first child. In addition, her father Maradona was also by his daughter’s side.

Nevertheless, what seems to be a fairy-tale marriage couldn’t last long. Let’s find out why their marriage went adrift.

Three years after their child’s birth, Giannina and Sergio went their separate ways. Maradona’s daughter confirmed the sad news on Twitter. She wrote that it had been “a difficult year,” further adding with “a lot of changes.”

As per some Argentinean tabloids, the former flames argued over Giannina’s party lifestyle. Following her post on Twitter, several of their fans randomly commented. One user asked Giannina, “Aguero doesn’t deserve you. He’s stupid and an idiot.”

Responding to the comment, Giannina wrote, “Don’t say that, he’s the father of my son and he’s nothing like what you say he is. When a couple finish it’s both their faults.”

Later on, Agüero moved on with Karina Tejeda, a buding singer. But, what about Giannina Maradona’s love life?

Who is Giannina Maradona Boyfriend?

After her separation from her ex-hubby, Giannina has remained hush-hush when it comes to her love life. She has since never come out with her relationship. Because of her secretive nature, we are yet to find out whether Giannina does have a boyfriend or not.

Hopefully she comes out publicly about her romantic relationship soon in the future.

What Does Giannina Maradona Do For a Living?

Diego Maradona’s daughter Maradona is an accessories designer for DeLaPaz, an online jewelry and accessories line based in Buenos Aires. Other than that, Giannina is a social media star. As of 2022, she has over 1.2 million followers on her Instagram account.

Has Inked a Tattoo of Her Son’s Name

Giannina shares a strong bond with her son. She has even inscribed a tattoo on her wrist that features the name of her son.

Besides, Giannina is an ardent supporter of the Argentina sports club, Boca Juniors, the same club where her father played football for the last time.

What is her Net Worth?