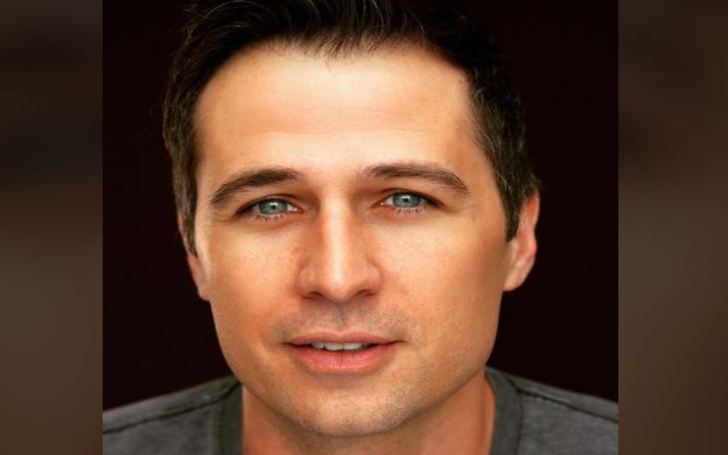 Gib Gerard, born Gilbert Vincent Gerard, is the son of actress, Connie Sellecca and her former husband, Gil Gerard. He is also an actor and producer known for his work in Currency Rising, Discarded, & others. His mother is a TV actress known for films and series like Flying High and Hotel while his father, Gil is famous as the main lead in the series Buck Rogers in the 25th Century.

Gib started his career as an actor — appearing in several short projects as well as with a handful of minor and supporting roles in indie and Christmas movies. However, he, as of the present, has evolved into a well-known TV host and a podcast runner.

Gib’s show on life and health lessons is constantly tuned by millions of viewers and listers across the North American region and even beyond. So know what else there is to know about the man himself. Become vis-a-vis with details extracted from his personal and professional life, his family, wife, children, net worth, and more.

Gerard was born on September 2, 1981, in Los Angeles, California. He is the only child of actors Gil Gerard and his ex-wife, Connie Sellecca. From his mother’s side, Gib is of Italian descent. His paternal grandfather was a salesman while his grandmother was a college instructor.

Gib is a former student of Harvard – Westlake School (1993 to 1999). He studied at Colby College, Waterville, Maine graduating in 2003. A year later, he passed out from Westmont College with a B.S. in Mathematics (theoretical).

The two other institutes he studied at are Howard Fine and Tom Todoroff. He is also proficient in scene study, voice, and movement.

His Father, Gil Gerard Was A ’70s TV Star

As mentioned, Gib’s father, Gil Gerard is an actor, who is famous as Captain William “Buck” Rogers in the 1979–81 television series Buck Rogers in the 25th Century.

Gib’s father has mostly done TV movies along with some cameo and recurring roles in series. His first TV role was as Dr. Alan Stewart in NBC’s The Doctors. However, it was the sci-fi show, Buck Rogers in the 25th century that made him known in the entertainment industry.

Gil Gerard has also voiced the character of Megatronus in the 2015 series, Transformers: Robots In Disguise.

Gib’s mother, Connie Sellecca is an actress, producer, and former model. People best know her for her roles on the television series Flying High, The Greatest American Hero, and Hotel.

Connie has also acted in other notable films and series including Captain America II: Death Too Soon, Hotel, PS I Luv U, The Wild Stallion, I Saw Mommy Kissing Santa Klaus and A Dangerous Affair.

His Parents Were Together For 8 Years

His parents, Connie and Gil were married from 1979 to 1987. Their marriage apparently was bittersweet. Gib’s mother once explaining the divorce said she has definitely been taken in by a man’s courtship and the whirlwind feelings, only to find it was wrong. She revealed it was her first husband, Gil Gerard. Three days after his mother received a divorce decree, Gil married another woman named Bobbie Leonard. Though he separated from her too in 1989.

After divorcing Gib’s father, Gil, Connie married an Emmy-winning musician/host, John Tesh in 1992. They have been together for nearly thirty years and share a daughter together, named, Prima Tesh.

Through his mother’s relationship with her second husband, John, Gerard has a half-sister, Prima Tesh. She is a dancer, fitness instructor, and influencer. She also occasionally features on Gib, John, and Connie’s show, Intelligence for Your Life.

He Has Appeared In Slasher And Christmas Movies

Gib Gerard made his acting debut in 2009 direct to the DVD film, The Wild Stallion starring Miranda Cosgrove. In the film, he stars alongside his mother, Connie Seccella, and has portrayed the character named Ty.

In 2012, Connie Seccella’s son, Gib appeared in his second feature-length film God’s Country playing the character named Jake Graham. He then acted as Matt Hamilton in 2012 All About Christmas Eve. That year he once again starred in a short movie titled Technical Difficulties.

In 2013, Gib played himself in another Christmas project, A Little Christmas Business. John Tesh’s stepson then portrayed the role of Logan in the 2013 mystery thriller film Discarded. Following that, Gib played Edward in yet another Christmas movie, A Christmas Mystery. Then in 2015, he appeared in director, Rob Federici’s slasher film, Desecrated.

Next came, back-to-back two Holiday films A Christmas Reunion (2015) and The Flight Before Christmas (2015).

His recent films include the suspense thriller, Deadly Daughter Switch (2020), and another slasher movie, 13 Fanboy (2021). Gib Gerard’s next film Love Accidentally starring Denise Richard, Brenda Song is currently under post-production and is set to release in late 2021.

In addition to acting, Gib has also executive produced and co-produced a handful of shows and films. He helped behind the screen in his stepfather’s show, John Tesh: Alive – Music And Dance (2008), and John Tesh: Songs And Stories From The Grand Piano (2020). He is also the producer of his ongoing hit TV show, Intelligence for Your Life.

Gib Gerard Runs A Successful Show, Intelligence For Your Life

Along with his stepfather, and mother, Gib hosts a nationally-syndicated radio show, Intelligence for Your Life. It is the on-air version of the TV show of the same name.

Both formats of the show deliver the latest cutting-edge tactics, tools, and routines for health & wellness, personal development, dating and relationships, fitness, weight management, and sleep. They discuss these topics by interviewing PhDs, MDs, authors, and world-class performers.

On the show, Gib Gerard brings the more quirky, trendy segments with a comedic flare from his training in The Groundlings and live stage experience. Additionally, he also appears on the Intelligence For Your Life radio programs each day.

John says Gib is a real study when it comes to pop culture, even in the 1940s or 1950s. They once did the show’s six-hour live broadcast on his Facebook page in order to raise money for America’s healthcare providers.

Does Gib Gerard Have A Wife?

Although not talked about as much, Gib does have a family. As per multiple reports, he also has two children. What’s more, a stock imaging site, Lightfield Studios claim he and his wife along with Connie and her husband, John once attended an Emmy event in April 2015. Gib and his alleged wife were together at the Daytime Emmy Creative Arts Awards at the Universal Hilton Hotel in LA.

What’s more intriguing is the fact that there, however, appears no woman on Gib’s socials, be it his Instagram, Facebook, or Twitter; especially one who could be his wife or a romantic partner. Additionally, Gerard also hasn’t revealed much about his family and kids.

While there are several guesswork and conjectures regarding Gib’s stepfather, John, and mother, Connie Sellecca’s net worth, there hasn’t been much discussion when it comes to his own wealth and finances. Tesh is undoubtedly a millionaire with his fortune somewhere between $5 to $10million while Connie is also quite comfortable money-wise. However, it’s their other partner’s financial specifics that are still in the mist.

Regardless, there shouldn’t be any harm in saying that the comic podcaster/actor is doing pretty fine in terms of material prosperity. One just cannot ignore the possibility that he might be making quite substantially from all those sponsors and affiliates his show Intelligence For Your Life is promoting.