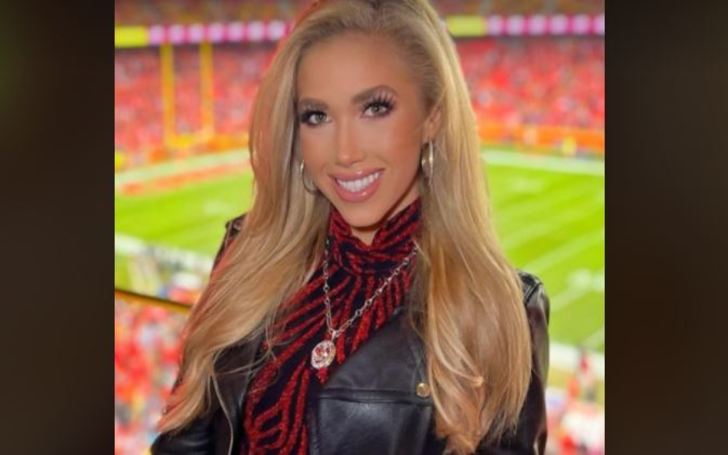 Gracie Hunt is a former pageant winner from Dallas Texas. She is also a model, entrepreneur, and philanthropist. Gracie, though is better known as the daughter of billionaire Kansas City Chiefs Owner, Clark Hunt, and his wife, Tavia Shackles.

Hunt is the eldest of Clark’s three children with Tavia and while she is gaining ground as a beauty influencer and activist, she initially was in a different career. In fact, there’s so much to her life than what appears from outside.

Know what are those facets all in the writing below. En route read about her early life, the legacy of her lineage, her personal life, and more.

Gracie Hunt Was Born Into A Billionaire Family

Hunt’s great-great-paternal grandfather, Haroldson Lafayette Hunt, was a prosperous farmer-entrepreneur. It, however, was her great-grandfather, H.L Hunt who would cement the foundation of her family’s empire. To start, HL purchased several lands across the country.

Later one of the Texas parcels of land Gracie’s great-grandfather in 1930 happened to sit atop of a massive oil field. By the ’80s her grandparents including the famous Lamar Hunt and his siblings had made the 1982 Forbes 400 list of the richest Americans.

Gracie’s mother, Tavia went on to place as the second runner-up at the Miss USA pageant and also is the former winner of Miss Kansas. Currently, Gracie is pursuing her master’s degree in sport management at the University of Kansas and hopes to become the first female NFL commissioner.

Gracie Hunt Is A Pageant Winner

Gracie Hunt followed in her mom’s footsteps and clinched the crown of Miss Kansas USA 2021 in April. This was 28 years after Gracie’s mom, Tavia Hunt, won the same title back in 1993. Gracie was then 22.

During her Miss Kansas journey, the now young adult had hired walking coach Kristen Bradford and spent one to two hours training with her every week for months

She also worked with six different interview coaches to be able to best field questions during the competition. The Chiefs’ fan watched her first pageant program with her mother when she was around 17 years old.

Gracie also participated in Miss USA 2021 and placed in the Top 16.

She Wanted To Be A Soccer Player

Though Gracie has competed on several pageantry events, she admits she didn’t always dream of competing in them.

Her first career choice was instead soccer. One of the best in her high school, she had hoped to play at college at Southern Methodist University in Dallas, Texas.

“Soccer was my first love. I wanted to play in college. I won the championship when I was in high school with my high school team, and played club, as well,”

revealed the daughter of Karl and Tavia.

Gracie revealed she had to give up her athletic career after suffering four concussions.

Gracie Hunt Is Allergic To Gluten

Post her pageant’s fame, Gracie started using her voice to be an advocate for health and fitness — a cause that she says is personal for her, having lived with celiac disease her entire life.

In fact, when she was young she had been through ER several times, been on morphine, and has always been super sensitive to gluten. Due to her illness related to dietary choices, she later gained accreditation in nutrition.

She Is Also A Philanthropist

Much like her mother, she also believes in giving back to the community and is the founder of Breaking Barriers Through Sports, a nonprofit organization.

Her non-profit organization focuses on building children’s confidence and a positive identity through sports. It additionally works with schools to reach kids from various economic backgrounds. Further, her organization has a partnership with NFL Play 60.

Breaking Barriers Through Sports also aims to ‘level the playing field for women, the disadvantaged, and those with disabilities.’

Gracie Hunt Is An Influencer As Well

The Texas native, Gracie also has her own company in the health and fitness space. With a great affinity for athletics and its positive effects on life, she entered the fitness industry the year after she won Miss Kansas title.

Through her social media handle, she regularly documents her fitness routines and vegan diet tips, listing the many benefits of a healthy and active lifestyle.

Gracie says she still trains really hard and is an athlete at heart who loves to run, lift weights, cross-train. Gracie, who is also a friend of Brittany Mathews, the wife of Chiefs’ quarterback, Patrick Mahomes, additionally has had offers to participate in two different reality TV shows.

She further works in marketing and brand development for the Kansas City Chiefs.

What’s more, she along with her mother, Tavia annually hosts the Style Lounge event in Kansas City, a fashion-show fundraiser to raise money for Metropolitan Organization to Counter Sexual Assault.

Does Gracie Have A Boyfriend?

In Jan 2022 when the Chiefs were heading into the playoffs with some serious momentum, Gracie on the sideline was creating her own story and was giving the tabloids to write something about her personal life.

That month several sources spotted her seemingly having a date in Kansas City with Bachelor Nation’s Tyler Cameron. Though, neither Cameron nor Gracie have addressed the aforesaid rumors.

However, earlier in one of her Insta stories when asked if she had a boyfriend, Hunt’s heiress had responded by saying,

I don’t and haven’t for a longtime and I’, not dating.

She added being the best was what she was focusing on instead. She also stated that she will not take any boyfriend applications until she achieves some of her goals.

As per some sources, Gracie also dated then-Broncos rookie quarterback and Kansas City native, Drew Lock in the past In Nov 2021, Hunt through her social media revealed she had been a victim of stalking for 21 months from late 2019 to 2021.

While her father, Clark Hunt is famously a billionaire, it certainly would be a massive overstatement to go and speculate Gracie is anywhere near as rich as him.

Although she has built a name on her own and is well on the verge of a financial breakthrough with her ventures, it will be a while before she even enters into a seven comma club.

In the meantime, she has also money coming from all those Insta endorsements & promotions in addition to lifetime free Chiefs’ tickets.

There are also of course some perks and benefits to her from her paternal empire. Though what her net worth looks like is exclusively a matter of theory and suppositions.