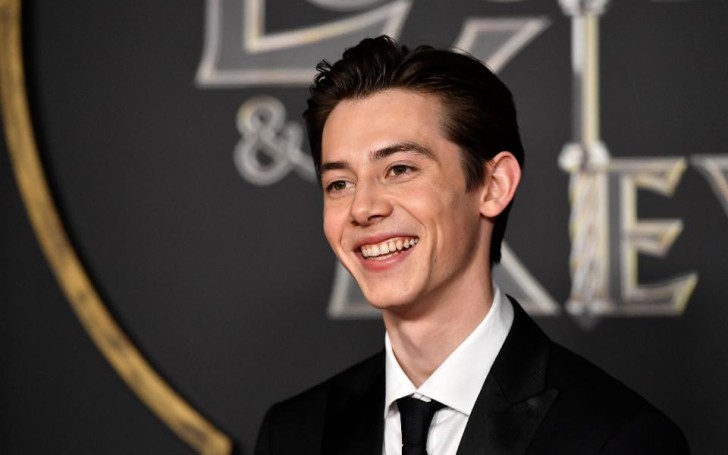 Red Band Society alum Griffin Gluck has come a long way since making his debut in the entertainment industry. Besides, the rising star was once in a happy relationship with a young starlet. But the couple has broken up and fans are wondering about who is Griffin Gluck’ girlfriend now? Who is Griffin’s romantic interest in 2020?

Well, apart from finding his current relationship status, also take a look at his past affairs and know-how did he first meet his now ex-girlfriend? Let’s find out!

Who is Griffin Gluck Dating? Does he have a girlfriend in 2020?

Currently, Griffin is single and not in a relationship with anyone. The handsome heartthrob is out of the dating scene since breaking up with his girlfriend.

Speaking of which, for the past couple of months in 2020, Griffin was in a relationship with the singer, Sabrina Carpenter. So yes, he indeed had a girlfriend in 2020. His former flame is a renowned singer and actress known for her roles in Girl Meets World and Netflix movie, Tall Girl.

Sabrina also has numerous singles in her belt for which she even won the Radio Disney Music Awards in 2015 and 2016.

While they were an item, Griffin added a few pictures with Sabrina. Their first intimate picture was from back when they went to 2o20 Golden Globes Afterparty. In the cute snap, both of them looked smitten with each other as Sabrina embraced Gluck’s face.

Although the pair never officially stated ‘we’re dating,’ their actions spoke volumes regarding the nature of the relationship. Safe to say, they were one of the cutest couples around.

Griffin Gluck and Sabrina Carpenter Relationship: How did they first Meet?

Griffin or Sabrina are yet to openly talk about their lovey-dovey so it is difficult to maintain since when are they dating. However, their first public appearance can be traced back to late 2019.

In December 2019, both of them went for a casual date, and onlookers spotted them being rather cozy. The lovebirds even had a steamy make-out session. At one time, Sabrina sat on her boyfriend’s lap as they shared a kiss.

Besides, sources also claim the duo first met while working together in the movie, Tall Girl. Now that we think about it, they might have really started dating whilst shooting. They made their first public appearance in 2019 and the movie was shot in 2019 as well. It all adds up.

Sabrina once defended Griffin on his Racist & Transphobic Behavior

When you are a celebrity, each and every movement you make is monitored by eagle-eyed fans and paparazzi. Similarly, Griffin’s past social media activity came back haunting him.

In November 2019, a user @gracefulbrina shared a series of pictures on her Twitter account claiming Griffin is both racist & transphobic.

Despite all that, Sabrina openly defended her former partner and told her fans not to judge him by the demons of his past. In a long Twitter message, she even openly apologized at Griffin’s behest.

Since then, people have moved on and we are definitely positive that Griffin has moved on from his terrible past.

In early 2020, Sabrina attended the premiere of the movie, Big Time Adolescent. The beautiful star specifically came to the event to support her ex-beau Griffin, who was playing a lead role in the movie.

Even though she entered alone at the red carpet event, she still stopped by for pictures with her boyfriend, Griffin.

As we all know, in order to maintain a stable and smooth relationship, one needs to be able to show support to their other half whenever necessary. Just like the phrase, Sabrina was a doting girlfriend who always supported Griffin.

Sadly, everything just ended between the two. In August of 2020, a rep for Sabrina broke the tragic news that Sabrina and Griffin have broken up.

Griffin Gluck Girlfriend in the Past

Though the 20-year-old is currently single, however, he was enjoying an intimate relationship with Sabrina. Now that she is considered as his ex-girlfriend, fans are eager to know if he had dated someone before her as well.

According to various tabloids, Griffin once had a romantic encounter with a girl named Natalie Jones. As for the occupation and other information about his ex-girlfriend, everything seems to be behind closed doors.

Who Is Briana Jungwirth? Is She Married? Facts About Louis Tomlinson’s Ex-Girlfriend