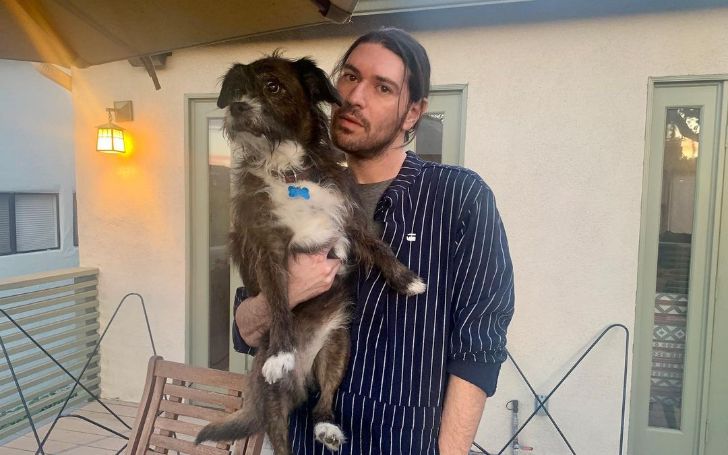 Hadley Klein is a Screenwriter, Producer, and Director in the American Film Industry. He is best known for his works in the movies like Terminator: The Sarah Connor Chronicles, Any Tom, Dick, or Harry, Good Morning Rabbit, & many more. Apart from his works as a professional, Hadley is also known as the husband of actress Taissa Farmiga.

Besides, Klein is also an actor, but his accomplishment in acting has remained limited. He has so far only played a character named Jimmy in the TV series Party Down unlike his wife Taissa, who is one of the reputed actresses in the industry. Well, how is his relationship with his wife? Do they have kids from their marriage?

So, today, we are going to explore the details of Hadley Klein along with his age, his parents, his list of movies, and his wedding, & much more.

What Is Hadley Klein’s Age? His Wiki and Parents

Hadley Klein was born Hadley Ethan Klein on the 25th of January, 1983, in St. Louis, Missouri, under the birth sign Aquarius. He is 39 years of age as of 2022. He grew up in his hometown along with his sister Amira Ashley Basaysay.

Growing up, he had a very ordinary upbringing and spent a major part of his life in his hometown along with his parents and sibling. Talking of his nationality, Hadley belongs to mixed ethnicity and holds American nationality.

While discussing his academics, the Missouri native Hadley majored in Film Studies at Emerson college located in Boston, Massachusetts. He finished up with his degree in the year 2005.

Moving on to his parents, he has a mother named Cindy Klein Lewis who is still by his side and living her life fully while his father is no more in the world. It has already been 22 years in 2022 since his father left the world.

In memory of his fun-loving father, Hadley keeps sharing his memory with his late father in his Insta account. In 2020, Klein again shared his childhood moments with his dad and wrote,

20 years is an unbelievably long time to miss someone. thinking of you today and everyday 🕶

Unfortunately, Hadley has not revealed the reason behind his father’s death.

After the death of Klein’s father, his mother Cindy again came across the love of her life. It was around 2001 when she started dating her current husband Shalom. Her longing partner Lewis who was a divorcee, was there for her to comfort her when she lost her husband at a young age.

Slowly and gradually, both of them got dragged toward each other very deeply and decided to take a chance on their relationship. In this regard, her spouse Rabbi once told,

“‘I’m going to take a chance here that something is changing, that you are no longer my congregant and I am no longer your rabbi.’ We embraced and agreed to see where it was going to go.”

Hadley Klein Is Into Filmmaking: His Movies

As he majored in film studies in his college, it is obvious that he had always been passionate about filmmaking. Following his passion, Hadley moved to Los Angeles after he completed his study and began his career as a production intern in a TV series named Joey.

Further, he became a production assistant in another TV series named Without a Trace. Likewise, he has worked in several TV series and movies like As the World, Baby’s Breath, Party Down, and many more.

However, he got noticed after he worked as a director and producer on some projects like Terminator: The Sarah Connor Chronicles, Good Morning Rabbit, and Any Tom, Dick, or Harry.

Klein Is A Writer And Actor As Well

Moreover, Hadley also did acting in Party Down, a TV series where he portrayed the role of Jimmy.

Hadley Klein Is Married To An Actress Taissa Farmiga: Their Wedding

As of 2022, Hadley is in a marital relationship with his wife Taissa Farmiga. The couple tied a knot on August 8, 2020, in a private ceremony at their own home. In their intimate marriage amid the corona pandemic, his actress wife posted their wedding photo on her Instagram with a caption,’ Married my best friend.’

Likewise, with the identical post,  Klein too in his Insta account captioned ‘Still feeling thankful this year ✌🏼.’ At their wedding, the duo appeared in very simple looks where Klein’s wife was seen wearing a white dress with a mask down the chin with the engraved word ‘Bride’ while the groom himself was in a black t-shirt and black pants.

They Dated Each Other for 6 Years Before Marriage

The now husband and wife had been dating since 2014. Taissa and Hadley reportedly met on a movie set since both of them are in the movie industry. Eventually, after 4 years of their relationship, in 2019, the couple reported being engaged with each other.

And finally, in 2020, they made their partnership official by sharing vows in a low-key wedding ceremony.

Taissa was born on August 17, 1994, as a younger sister of American actress Vera Farmiga. As a star sibling, Taissa herself dreamt of being an actor since her childhood. And eventually, she made a debut in the drama film Higher Ground in 2011.

Following her debut, she starred in several movies like Coven, Roanoke, Apocalypse, The Long Dump Road, Share, and many more. However, Farmiga got fame after she worked on an American Horror story, Murder House.

Likewise, she also got critical acclaim for her work in movies like The Final Girls and 6 Years. Further, she was included on Variety magazine’s list of “The 14  Women Who Dominated the South by Southwest Film Festival”.

Hadley Klein Is On Instagram: What About His Other Social Networking Sites?

Taissa’s spouse Hadley is hugely active on Instagram under the username @hadleyk with an intro “my name is carmelita chu. i collect butterflies.” He has 19.5k followers on his Instagram with 1,194 posts in total.

Likewise, Klein is also on Twitter with 2,825 followers. Till today, a director has tweeted altogether 9,838 tweets.

Looking at his latest Instagram posts, he seems to be busy with his upcoming projects. He has lately been working as a producer in the upcoming romantic movie named She Taught Love along with other producers, Milan Chakraborty and Sanjay Sharma. In this movie, his wife Taissa will be starred alongside Darrell Britt-Gibson.

Likewise, he is enjoying his family life with his wife, & other family members.

Klein has been professionally involved in the American film industry since 2005. Since then, he is continuously into some projects either as an assistant or producer, or writer. Hence, as per reports, he has a net worth of $10 million.

On the other side, his popular wife, Taissa Farmiga’s net worth is $1.5 million.