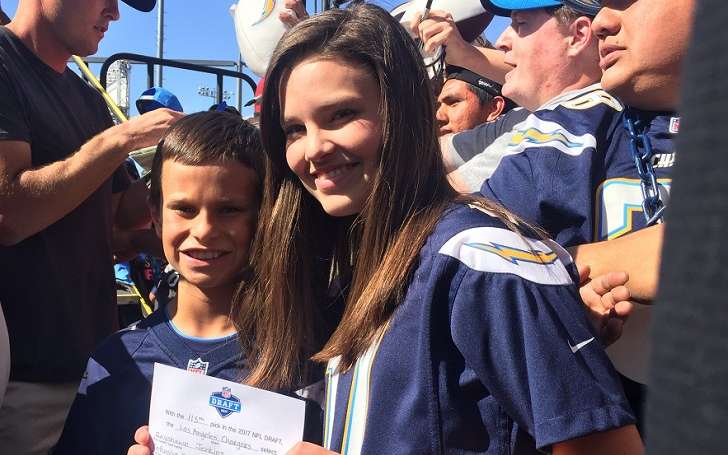 If you are an ardent fan of football, then we don’t need to explain who is Philip Rivers, a global icon adored by millions all over the world. The former quarterback legend played the majority of his illustrious career with the Los Angeles Chargers and led the team to several historical victories.

In addition to all that, Philip is known as a “best father” in his still-expanding family of eleven. The former Los Angeles Charger quarterback has nine children with his high school sweetheart. Their ninth kid, Anna was born in March 2019.

But, in today’s article, we are going to talk about Philip Rivers’ first-born daughter, Halle Rivers, who currently is at college. Let’s know more about Halle down below!

How old is Halle Rivers? Details on Her Early Life and Parents

Her age is 18 as of 2021. She was born on 6th July 2002, in San Diego, California, to Philip Rivers and Tiffany Goodwin. Her mother, an Alabama native is the co-founder of The Hermoza, a women’s swimwear company, with her friend Marisa De Lecce. It aims to provide stylish and modest swimwears to women.

Talking about her parents’ love story, they began dating when both of them were in middle school. The two wed in 2001, in a low-key wedding ceremony. A day before their nuptials, Tiffany converted Catholic. Philip and Tiffany have since been leading a beautiful relationship.

Halle Rivers Has Eight Siblings: Is the Oldest Among Them

Halle grew up in a large Rivers family. She has eight younger siblings; six sisters, Caroline, Grace, Sarah, Rebecca, Clare, and Anna Rivers, and two brothers, Gunner and Peter Rivers. Her youngest sibling, a sister Anna was born in March 2019. The former athlete announced the big news via Twitter, on 26th March 2019. “SHE’S HERE. Welcome to the world, Anna Rivers ?”

What Happened to Halle’s Brother Gunner?

Back in 2013, Gunner, then 5 years old was diagnosed with type 1 diabetes. The same year, Philip opened up about the possible signs of the disease with Fox 5 San Diego. There, Philip said, “He’s football all the time, nonstop energy all the time.” He added,

“And late in the football season last year he didn’t want to play as much, he started to lose weight. He had to pee all the time. “We took him in, and his blood sugar was 700 [the acceptable range is closer to 80 to 100, Rivers said]. He’s dying there right in front of you. It’s terrible.”

Later on, it confirmed that Gunner was diagnosed with diabetes. The pre-teen boy now relies on daily injections in order to manage his glucose levels. Tiffany told her son with People, “He’ll do injections every time he eats anything that has a carb in it. He’s really steady with it, and it’s just become part of our life.”

Philip Rivers’ first-born daughter is now a college student but it’s unclear about which university she goes to.  Besides, being the daughter of one of the greatest players in NFL history, Halle is also a sports lover. She currently plays tennis at college. Similarly, most of her siblings are involved in several sports. Her sister Caroline plays basketball while Grace, an eighth-grader is into tennis and basketball like her sisters.

Her Relationship With Her NFL Star Father

Halle shares a strong bond with her dad. In a conversation with IndyStar, the NFL veteran said: “She reminds me, big-time, of her mom, which is a big compliment. The biggest compliment I can probably give.”

Furthermore, Rivers felt the highs and lows of her father’s then-prolific football career. Philip once told when the Chargers lost a divisional playoff game in Pittsburgh, his daughter was heartbroken.

Besides, Rivers is also a doting father. Halle once said of her father as,

“He’s so selfless. He’s an NFL quarterback; he’s doing a million different things every day, but every day he comes home, and he wants to be with us. If he has one extra minute that he could do something else, he’ll be with us.”

Her Net Worth and Lifestyle

The exact amount of Halle’s net worth is under review as of now. But, being the daughter of such a star father, Rivers has had quite a decent lifestyle. Her dad Philip has an estimated net worth of $80 million.

The family of eleven used to live in their San Diego house. As per the reports, Philip listed the mansion in the market for $4.2 million in April 2020. Further reports have yet to come.

Want To Know About Robert F. Smith’s Ex-Wife Suzanne McFayden? Everything About Her