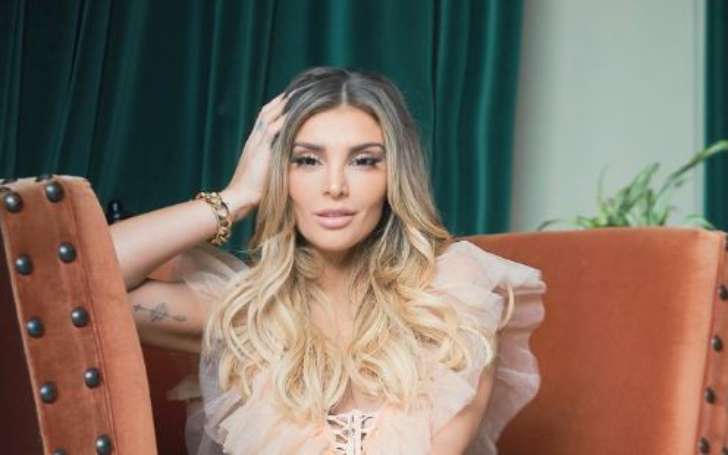 Hana Giraldo is an American singer, songwriter, model, actress, and entrepreneur. She is popular as the second child of musicians Pat Benatar and Neil Giraldo.

Despite being born to famous parents, Hana has built her own identity. The 28-year-old owns her own vintage fashion line called RiptLA. Likewise, as a musician, Giraldo herself has released a few songs titled Insanity, F U UP, Running, Love is a Battlefield, and several others.

In 2022, Hana was a part of the TV show Relatively Famous: Ranch Rules alongside other star kids in hopes to prove their worth in the world. Tag along with us to learn more about the rising singer/songwriter Hana Giraldo’s age, boyfriend, & siblings are listed down below.

Hana Giraldo was born to celebrity parents Neil Giraldo and Pat Benatar on 12th March 1994 in Los Angeles, California. She turned 28 in 2022. Likewise, she stands 5 feet 4 inches tall in height.

She is an American as per her nationality and has a mixed ethnic background. As per reports, she is Sicilian from her father’s side and has German, English, and Irish descent.

Apart from this, Hana has not mentioned her educational qualifications and other details of her childhood.

Hana Giraldo Was Bullied By People While Growing Up

Giraldo grew up traveling with her parents in their tour bus most of the time. When she was in 5th grade, she moved to Hawaii and got bullied pretty badly by a few mean people.

Despite being a star kid, she was picked up for wearing braces and being ‘nerdy’. According to her YouTube video, she was beaten up, spit on, yelled at, and more. After growing out of it, she became an advocate for stopping bullying.

A year later in 2018, she released a second part of the My Bullied Story where she was talks in brief about her experience.

Hana Grew Up Alongside Her Older Sister Haley

The youngest Giraldo grew up alongside her sister Haley Giraldo who is 9 years older than her. Talking about her sister, Haley is a model and social media influencer best known for her fashion and lifestyle-related posts on Instagram.

She currently has over 128k followers on IG and over 7k followers on Twitter. Likewise, Haley has worked with American Apparel, Gladys Tamez Millinery, L*SPACE, and Lack of Color Hats.

Giraldo is married to her long-time boyfriend-turned-husband Matt Williams. They share two daughters Stevie James Williams and Lola Ford Williams. Moreover, the pair is preparing to welcome their third child, a baby boy.

As mentioned earlier, Hana is a model, actress, comedian, and singer-songwriter by profession. Being born to celebrity parents, Giraldo had a kick start to her career as a star kid.

She began her journey as a fashion designer who designed custom T-shirts. Later on, she became a stylist for vine stars Lele Pons, Hannah Stocking, Ray Diaz, Inanna Sarkis, Kevin McNamara, and others. Afterward, she started appearing alongside them in their videos and gained media attention.

So far, she has appeared in videos like When your friend’s bilingual, What did I get myself into, Long Nails Problems, What we do in our free time, and many more.

Hana started her self-titled YouTube channel on 10th December 2013 and began her youtube journey. As of now, she has over 34.2k subscribers with 22 videos and over 798k total views.

One of her most watched videos I Faked Being Ariana Grande has over 271k as of Aug 2022. In the video, we can see her walking around the LA neighborhood impersonating pop singer Ariana Grande and taking pictures with the public.

The model landed her debut role in the 2017 movie The Lit Party. This was followed by short films like Unusual Heroes, Room 823, Net Top Model, Terrible High School Teacher, Magic Fail, and more. From 2017 to 2019, she appeared in the TV mini-series, Lele Pons and Hannah Stocking.

As a singer, Hana has a handful of song credits to her name. She dropped her first song BLOODMOON seven years ago in 2015. Likewise, her other hit songs are Shotgun, Running, Reaching Out, Insanity, Do you love me Anymore, and Tote- Gimme that Bass.

As we’ve mentioned before, Hana is the daughter of singer Pat Benatar and her musician husband Neil Giraldo. Unlike Hana’s rising career, her mother already has a successful career of five decades.

Benatar released her breakthrough debut studio album In the Heat of the Night in 1979 with hit singles Heartbreaker and We Live for Love. As per reports, she had quit her job as a bank teller to become a musician.

Well, her decision definitely turned in her favor. So far, Pat has released 11 studio albums and around 40 singles. She is currently on tour for De Novo Tour 2022.

As of 2022, Pat has nine Grammy Award nominations winning four out of them. Likewise, she has also won three American Music Awards for Favorite Pop/Rock Female Artist. Nonetheless, she will be added to the Rock and Roll Hall of Fame in November 2022.

Moving on, Hana’s father Neil Giraldo is a renowned record producer, arranger, singer, and songwriter. The 66-year-old has won five Grammy Awards for his outstanding work in the music field.

Not to forget, Neil’s work has sold over 45 million records as of now. Some of the artists he has worked with are Steve Forbert, John Waite, Kenny Loggins, The Del-Lords, and Rick Derringer.

Hana Giraldo Got Into An Accident Recently In 2021

On 28th July 2021, Hana got into a terrible accident after she was hit by a drunk driver on a highway. Looking at the photo Pat shared on her Facebook, Hana’s front wheel and the engine were severely wrecked and almost falling apart.

She was driving her Range Rover SUV which costs around $104,500. The driver who hit her left the scene. Luckily, Hana suffered minor injuries and stayed at home for recovery.

Are Hana Giraldo And Rumored Boyfriend Austin Gunn Still Together?

While the model was cast as one of the eight-star kids to get down and dirty with the livestock at the Saddleback Ranch, she managed to find herself some romantic time.

During the filming of Relatively Famous: Ranch Rules, she clicked with Austin Gunn, the son of wrestler Billy Gunn. The duo became good friends and Austin even expressed his interest in the singer-songwriter.

The pair also went on a date to the hot springs and a little shopping spree. As their budding romance was all filmed by the crew, it gained a lot of public attention.

However, it all went downhill after Gunn was spotted flirting with a local girl named Rachel during a dinner celebration. He shared his number and even kissed her before saying their goodbyes.

The singer-songwriter and the wrestler had a heated interaction after the incident and even turned physical for a moment.

Though the star kids were able to make amends for the grand re-opening the following day, it doesn’t appear as if they ever got their romance back on track. Also, they unfollowed one another on Instagram.

During an interview, Austin said,

“I think that the finale is kind of where it wraps up, with how we feel about each other and so forth…That’s kind of it, really — there’s nothing more to the story.”

Before her brief romance with Austin, the 28-year-old actress was dating actor and social media influencer Kyle Massey. Her ex-boyfriend Kyle is best known for his work in That’s So Raven and Cory in the House.

The pair reportedly started dating in October 2017 and frequently appeared on one another’s social media profiles. In 2019, Hana even wished him a happy birthday with the caption,

“HAPPY BIRTHDAY! @kylemassey I love you so much your my best friend and the best Boyfriend a girl could ask for! I’m excited to spend my life with you, my love! I love u so much. No words can really describe it. But I love u forever!”

While they were together, Hana even featured Kyle in her songs 2 HIts and Tote- Gimme that Bass. Sadly, the former lovers part ways in December 2020.

As per Hana herself, she got her lips done or simply got lip fillers when she was just 14. Apart from that, she has not gone under any other plastic surgery or body modification.

Similarly, she has several tattoos around her arms and the back. Her first tattoo, a cross on her right wrist was from her friend Gabriella. This was also when she was 14. In her video, you can watch her explain each one of her tattoos.

Is Hana Giraldo As Rich As Her Parents?

With her multiple careers, Hana is surely earning thousands of dollars for herself. As per various sources, she has a net worth of around $1 million in mid-2022.

While on the other hand, her celebrity parents Pat Benatar and Neil Giraldo have a combined net worth of $40 million. The celebrity couple has real estate reportedly worth at least $10-15 million.