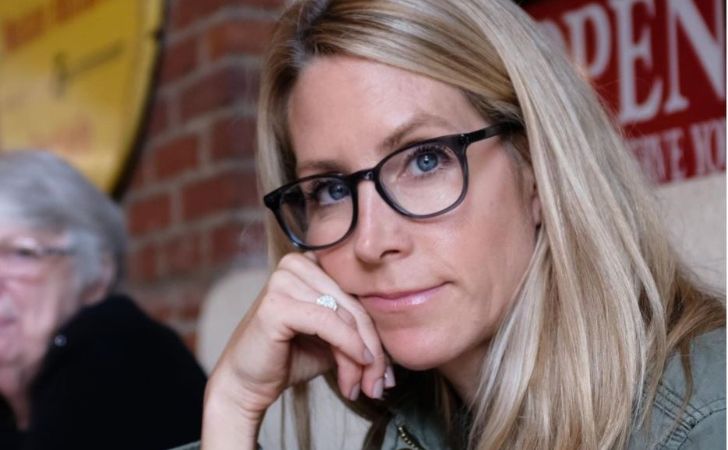 Heather Helm, also known as Heather Ann Lillard, is a successful realtor. With a long history in the real estate business, Heather currently employs herself at a real estate technology company Compass. Though Heather has achieved huge success in the real estate world, she is recognized in the mainstream media as the wife of actor Matthew Lillard.

Along with a successful professional life Helm also leads a decent family. She shared a great relationship with her actor husband and is also a mother of three children.

What’s more? Well, in this article we are going to explore her career, romantic relationships, kids, her family details, and a lot more interesting details.

Who Is Heather Helm?

As we just mentioned, Heather Helm is a realtor at Compass at present. Besides, she is also involved in another real estate company named Pacific Union International.

Heather Helm was born on July 17, 1971, in Pasadena, California, United States. She did her high school at La Canada High School from 1987 to 1989. Soon after this, she joined the University of California, Los Angeles, in 1989, and ended up receiving a Bachelor of Arts Degree in English Literature in 1993.

Heather Helm Career: She Is a Successful Realtor

50 years old Heather leads a successful career in the real estate business at present. Since January 2018, she works as a director in the estates’ division at Compass(formerly Ted Clark and Partners). While Helm came to know Ted as his client, she soon developed enough bonding to join Compass as Ted’s partner.

Further, she is also involved in another real estate company named Pacific Union International. Well, though she currently earns a decent reputation in real estate, the start of her career was not the same the beginning.

In fact, following her graduation, she began her career at The Walt Disney Company as Director of Special Event Marketing. Well, her tenure at The Walt Disney proved to be of huge benefit where Heather got to hone her marketing skills. She shifted her career to real estate after she moved to Pasadena, settling down with her husband.

She Is Into Social Works

Matthew Lillard’s wife Heather is also into social welfare. She is involved with several social welfare organizations; she is a longtime member of The Pasadena Children’s Guild, a Founder’s member of Circle of Friends. Along with this, she is also a supporting member of Huntington Hospital and a member of Scrubs.

Further, she was the board member of a non-profit organization named Madison’s Foundation and a current member of Friends of Foothill Families. Not only this, but she also has a huge involvement in religious activities and is an avid follower of Christianity.

The beautiful Heather leads a successful marital relationship. She is married to Scream actor Matthew Lillard. The duo tied the knot on August 12, 2000, and are together ever since.

As per the reports, now husband and wife Heather and Matthew dated for a while before they took the decision to tie the knot. Well, it has been over 20 years since the two walked down the aisle and they still share a great marital relationship.

Just recently on August 27, 2020, Matthew shared a beautiful post from his early years with his wife. In the caption, he came with beautiful lines expressing his years-long journey with his Helm. He wrote,

The moment we met, the moment we said yes and now. 20yrs of marriage goes by so fast when you’re partnered with your best friend. I love you Heather Lillard.

Talking about their first meeting, they first came across at a party. Matthew reportedly instantly fell for Helm, so much that he invited himself along as soon as Heather mentioned that she was going to her friend’s wedding in Italy.

She Is The Mother of Three Children

Heather is a beautiful mother of three kids. Her first child, a daughter Addison Grace Lillard was born in 2002 and weighed 6 pounds, 10 ounces at birth. She welcomed her second daughter Macey in 2004, and her third child and her only son Liam was born in 2008.

The family of five has a great bonding. Be it going out for a dinner or celebrating an event, the family is always up to the mark. In fact, Heather and her husband Matthew are very keen on sharing their kid’s pictures on social media.

Her Husband Is a Successful Actor

Like we mentioned earlier, Heather’s husband Matthew is a successful actor and has already appeared in multiple movies and TV series. He began his career as a TV host in 13 episodes of Nickelodeon TV show SK8-TV, in 1990.

Soon after this, he made his film debut appearing in the 1991 film Ghoulies III: Ghoulies Go to College, where he played the character named Dexter Stork.

So far, he has appeared in numerous movies and TV works. Some of his successful films include Mad Love, If These Walls Could Talk, Scream, Scream 2, Scream 4, Scooby-Doo 2: Monsters Unleashed, Endless Bummer, and many others.

While most of her Instagram posts are about her professional life, she also occasionally gives an insight into her personal life via her posts. Similarly, she is also pretty much active on Facebook. She goes by Heather Helm Lillard on Facebook.