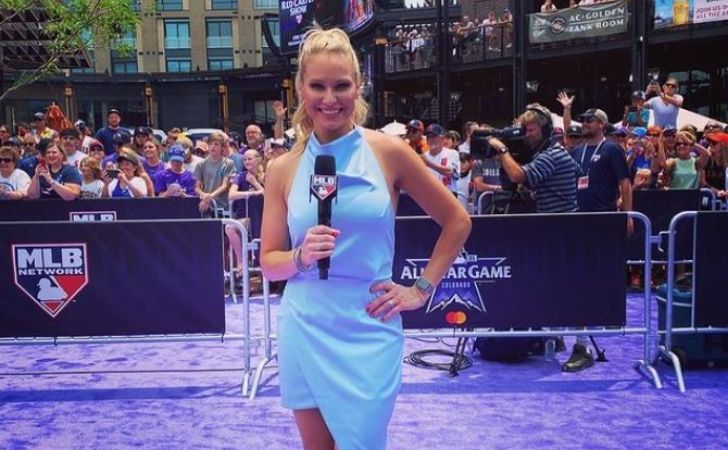 Heidi Watney is an American sportscaster, who is currently the host & field reporter for MLB Network. An alumnus of The University of San Diego, Heidi has also worked for other news networks like New England Sports Network, KMPH-TV, and others. Besides, she has also appeared in a few TV series including Quick Pitch.

With all her professional accomplishments, Heidi has achieved decent fame in the media. In fact, her social media followers have also increased drastically over the years. But what about her love life? Is she married? Who is her husband?

In this article, we are going to explore everything from her family, and marriage, to her net worth at present.

Who Is Heidi Watney?

American sportscaster Heidi Watney was born on May 19, 1981, in Fresno, California, USA. She is the daughter of father Lon Watney and mother Paula Watney. Her father is a former golf coach for the Fresco State men’s golf team, which he coached for 35 years. He has reported coaching numerous teams including the successful golfer, Nick Watney.

Interestingly Heidi is related to Nick Watney as his cousin-sister. Needless to say, they share a great relationship together. Further, she also has three other siblings, two brothers Josh and Dusty, and a sister Kelly.

Her older sister Kelly is also a sports coach for the women’s volleyball team at Fresno Pacific University.

She was interested in Sports from an early age

Growing up in Fresno, Heidi showed interest in sports from an early age. As a high school student at Clovis West High School, she even took part in hurdles, diving, gymnastics, and cheerleading.

Carrying on her passion for sports, she attended the University of San Diego on an academic scholarship. Also a National Merit Scholar, she finished her graduation in  2003.

Moreover, while still in college, she took part in the Miss California USA pageant, where she ended up being the first runner-up in 2002.

Heidi Lost Her Brother At a Young Age

Unfortunately, one of Heidi Watney’s brothers Dusty is no more in this world. He reportedly died of Prader-Willi Syndrome in April 2018. The death of her brother took a toll on her and she often shares photos in memory of her brother on her social media.

Besides, she also runs a donation campaign in order to spread awareness about Prader-Willi Syndrome.

She Is Close To Her Grandparents

Heidi shared a great relationship with both her grandparents. Unfortunately, her grandmother is no more. Her grandparents have over 10 kids and 24 grandkids.

Back on March 22, the MLB host shares a beautiful photo of her granny with her large family on her Instagram. She also expressed how lucky she is to be born into such a family.

Heidi Watney Is A Successful Sportscaster

As we mentioned earlier, Heidi is a successful sportscaster. She began her career professionally in September 2003, as a morning traffic reporter for KMPH-TV (FOX 26). Eventually, she went on to host weekend sports shows and by 2005, she was already a weekday sports reporter.

In April 2008, she joined New England Sports Network as a Red Sox Reporter. There she also worked as the gameday reporter for Boston Red Sox and hosted Ultimate Red Sox Show as well. She worked with the network for over three years until December 2011.

After quitting her job at NESN, she joined Time Warner Cable SportsNet in January 2012. There she was the reporter for LA Galaxy soccer games. She left the work in December 2012.

Since January 2013, she is the host & reporter for The MLB Network, where she is the primary host of Quick Pitch.

Heidi Is Married To her Husband Mike Wickham

just in case you didn’t know Heidi Watney is a married woman. She is married to baseball executive Mike Wickham. They tied the knot on January 1, 2015, in a grand wedding ceremony in San Diego. The two are now together for over 7 years and their marital relationship seems as strong as ever.

As a married couple, they love going out on vacation and spending time together. Also, Heidi does never miss celebrating her marriage anniversary with her husband, which she flaunts on her Instagram.

Not long ago, Watney had a wonderful trip to Venice with her partner and they seemed to enjoy their time together.

Heidi Watney Is A Mother Of Two Children

The41 years old Heidi has two children from her marital relationship, both sons, Jax Wickham and Chase Dustin Wickham. Her first child Jax was born on April 25, 2018, and he is 4 years old in 2022. The couple had earlier announced her pregnancy with her first child in November 2017.

As parents, they share a great relationship with both kids. Moreover, Heidi often shares photos of their kid on her Instagram.

Watney Had Multiple Relationships In The Past

While Heidi is well settled at present, she has had numerous love affairs in the past. Her first reported romantic relationship was with American baseball pitcher Jacob Edward Peavy. They reportedly dated around the early 2000s.

Further, Watney was also in an alleged relationship with baseball infielder, Nick Green.

How Much Is Heidi Watney’s Net Worth?

As a journalist for MLB, Heidi charges a decent amount as her salary. Well, as of 2022, she has amassed a net worth of around $3 million. Likewise, her husband Mike is also pretty rich with a net worth of $200,000.

Know About MLB Sportscaster Lauren Shehadi. Things you Should Know About Her

Where Is Jolene Blalock Now? Why Did She Quit Acting? Husband?