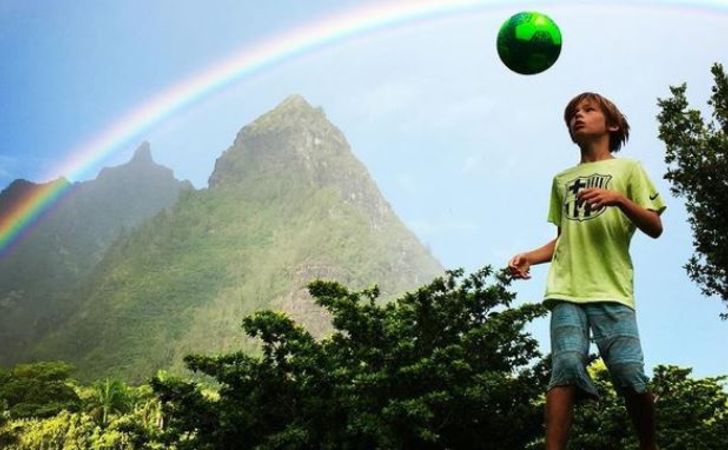 Henry Daniel Moder is the youngest son of American actress and producer Julia Roberts. He was born from her marital relationship with her second husband Daniel Moder. His mother is regarded as one of the most successful actresses of all time, with an Academy Award and three Golden Globe Awards to her name.

Well, how is Henry’s life as a star kid? Where is the young boy in 2022? In this article, we will find out some untold facts surrounding his childhood, parents, and much more.

Henry Daniel Moder Is The Third Child Of Julia Roberts: His Birth Details

The youngest kid in the family, Henry Daniel Moder was born on June 18th, 2007, to father Daniel Moder and mother Julia Roberts. He weighed 8 lbs, 9 oz at the time of birth. As of 2022, his age is 14, and will celebrate his 15th birthday on coming 18th June. Back in June 2021, on the occasion of Henry’s 14th birthday, his father shared a short video of his son doing skateboarding on his Insta. He wrote,

“Turning 14…. turning in the air…summers turn. Ya Henry.”

Born and raised in Los Angeles, Henry shares a great relationship with her parents. Further, he also has two siblings, a twin brother and sister Phinnaeus Moder and Hazel Moder. Well, Hazel is a minute older than her twin brother.

Talking about his education, Henry is currently in school and is pretty much engrossed with his studies. His mom once stated that her kids just want to get through their maths exams.

Henry Daniel Moder Is Into Skateboarding

Henry is just around 14 and has already shown his interest in skateboarding. That’s interesting both his parents are in completely different fields. In fact, he has little to no interest in his parents’ business with films and creative arts.

He seems to be more of an athlete and is often seen doing athletic activities. In fact, Julia Roberts’s son Henry prefers to skate to his school than walk or drive with his father. On May 3, 2021, his father even posted a clip of him skating at his school. Check it out.

Well, unlike him, his older siblings love soccer.

His TV and Movie Credits: Appeared in A Few TV Episodes With His Mother

Though Henry has no interest in movies and TV, he has appeared in a few movies and TV series, and that’s because of his actor-mother. Back in 2016, he played a minor character in a romantic comedy Mother’s Day. The movie stars all his siblings and his mother as well.

Besides, he was also seen in an episode of TV series named VH1: All Access. Only time will tell if we will get to see him in movies in the future as well.

His Mother Julia Is Very Protective

Like any mother, Julia is very protective when it comes to her children. Despite being so famous, she keeps it very low profile and even avoids the media when with her kids.

Not only Julia but Daniel also practices the same. Be it going grocery shopping or on a family trip to Disneyland, as a parent, they make sure their kids are well-protected. Talking to USA Today in 2013, she said,

We try to protect our kids. We just want to have our family life and not have that intruded upon.

Henry’s mother is a successful actor. She has appeared in numerous movies and is a recipient of two Golden Globe Awards and an Academy Award. She won the Academy Award for Best Actress for her appearance in the 2000 film Erin Brockovich.

Roberts made her acting debut with a TV role in the 1987 series Crime Story. The same year, she also appeared in a movie named Firehouse. Her breakthrough role came with the 1990 romantic comedy film Pretty Woman, grossing over $464 million worldwide.

Over the years, she has appeared in numerous movies and TV series which include Ocean’s Eleven (2001), Ocean’s Twelve (2004), Charlie Wilson’s War (2007), and several others.

Likewise, Henry’s father is also a successful producer and has been a part of movies like Full Frontal, Friends with Money, Fireflies in the Garden, Secret in Their Eyes, Ibiza, and others.

Henry’s parents Daniel and Julia are leading a beautiful marriage. They tied the knot in 2002 and are together for 19 years now. The couple dated for around 2 years before they walked down the aisle. They reportedly met on the sets of The Mexican in 2000.

Both the couple were married earlier before they walked down the aisle. While Julia was married to country singer Lyle Lovett, Daniel was married to Vera Steimberg.

Unfortunately, Henry is not on Instagram. In fact, he is not on any social media platforms and that’s because he is still too young to be on socials. However, both his parents are on Instagram. While his father has 64.7k followers, his mother Julia has around 9.4 million followers in 2022. Well, they often post photos of Henry on their socials.

Well, he is just 14 years of age and is currently busy with his school and studies. Besides, he also spends his time practicing skateboarding. He can occasionally be seen on his parents’ Instagram posts.

Henry is still a student and has yet to involve in anything professionally. So it is hard to estimate how much net worth he has as of now. But, talking about his parents’ fortune, his mom has a $250 million fortune, while, his father’s net worth stands at $10 million.