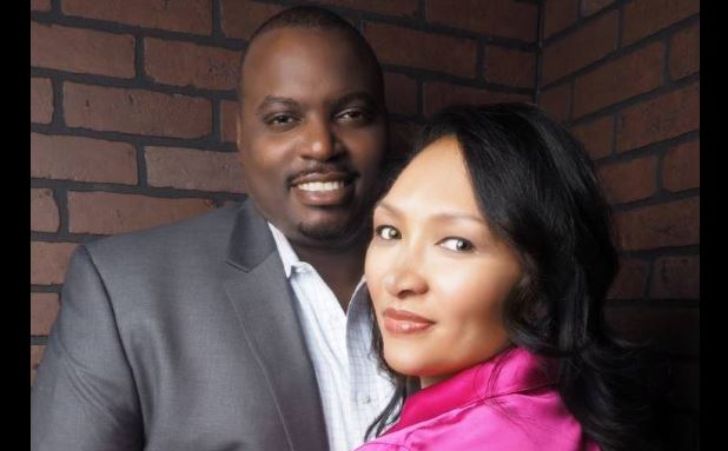 Idris Elba’s ex-wife Hanne Norgaard is a professional make-up artist and a businesswoman. She has worked on television shows, stage production, movies, adverts, and fashion shows.

Norgaard, who mostly goes by the name Kim Elba, however, is better known as the ex-wife of the 2018 People’s Sexiest Man Alive, Idris Elba. The former couple was in a marital union from the late 90s to the early 2000s with a daughter in between.

Know what she is doing in the present; whether she remarried or not after the end of her relationship with The Wire actor. Also read about her life prior to meeting Elba, her usuals, and more.

The First Wife Of Idris Elba, Hanne Norgaard Was An Adopted Child

The ex-wife of the Bafta Nominee actor, Hanne Norgaard was born on April 5, 1977. She is of Afro-Asian descent and considers herself of Blasian nationality.

Norgaard’s mother is from South Korea, and her father apparently is an African American. She though grew up with her adoptee parents who apparently were of Danish nationality.

Who Are Hanne Norgaard Parents?

In the post, she revealed finding out about her father through Ancestry, but he apparently didn’t have much information on her mother.

Hanne wrote her mom’s name is Kyue Nam Kim and that her own Korean name was Nam Hee Kim. In the Facebook post, the part Korean beautician further disclosed how she went to Korea and visited the orphanage. It was the same place where she had spent a year before her adoptee parents took her.

Through the orphanage, she reportedly got quite a bit of information as to where her mother was born and how old she is, and so on. However, since she didn’t leave her registry number Hanne couldn’t track her down.

Hanne Norgaard Has Done Make-Up For Some Big Artists

The 45-year-old Hanne has been in the makeup business for more than 15 years. During those years, she served a lengthy list of high-profile celebrity clientele. It ranged from platinum-recording artist, Chilli of TLC and Lyfe Jennings, to actors Geena Davis and Hugh Laurie of television hit series House.

Some other big names include Jenna Redgrave, Nigel Havers, her ex, Idris Elba, the late Robin Williams, and others.

Hanne maintains she finds it a blessing to have had the opportunity to work with some of the world’s most talented actors and musicians.

The celebrities have been considering Elba’s former spouse a pro amongst Europe’s socialites and entertainers and the exclusive Hollywood elite. The South Korean and African American former model is an insider to the Hollywood “glitz and glamour.” What’s more, people often refer to her as a trusted resource for the makeup demands of today’s most-watched stars.

Her career in the makeup artistry field started right after she graduated with the highest honors from the acclaimed “International Makeup Academy” in Europe.

Shortly after graduating, Hanne says she was extremely fortunate to get a smooth start in the industry and land jobs with prestigious companies such as BBC and Columbia Tristar.

She gained an incredible amount of knowledge working with those companies, not only about makeup but the industry as a whole.

Later on, she went back to further educate herself. She subsequently received a Diploma with the highest honors in the continued education of makeup artistry. And in addition to that, she also studied cosmetology and esthetics. Norgaard has also launched her own make-up brand called ‘Kim Elba Cosmetics’.

Apparently, the reason behind Hanne doing her own make-up line is because of the industry people asking her questions such as…do you have your own makeup line or when will you be launching a makeup line?

In the meantime, she is also the manager of her daughter.

How Did Hanne Meet Her Ex-Husband Idris Elba?

Hanne met her ex-husband, Idris when she was a makeup artist in London, and the British citizen was an upcoming actor. Norgaard and the Pacific Rim star married in 1999 after which the couple shifted to New York.

When together, the couple welcomed a daughter, Isan Elba in 2002. As it turned out, Isan was born on the very day her father secured his role on The Wire, the launchpad for his later success.

Her parents though divorced a year later in 2003.

Why Did Hanne Norgaard And Idris End Their Marriage?

It is believed Elba and Hanne’s union started to fall off because of the former’s failure to secure any acting job and subsequent financial hardships.

The six-foot-two-inches tall Elba had brought his first wife, Norgaard, with him when he moved to New York to launch his career.

When the couple arrived in the States, Elba, however, struggled to master an American accent and henceforth would only get a job as a laborer and nightclub bouncer.

Some say that the now 49-year-old Elba stopped living with Norgaard when she was still pregnant with their first child, Isan. While no longer together, the former couple, nonetheless remain on good terms, co-parenting Isan.

They had also appeared together side-by-side at their daughter’s 16th birthday.

Hanne On Her Ex-Spouse Success And Their Bygone Relationship

Norgaard seldom talks about her past relationship with Elba. Nonetheless, of her ex-husband becoming a successful actor, Norgaard with Black Christian News, said,

I couldn’t have seen it coming. I knew he would be a great actor. He showed amazing promise when we were young. And there was no doubt in my mind that he would surpass many. But how the public reacts to him, I never even considered.

Hanne says the marriage with Elba anyway was a priceless experience that bought her the most precious gift, her daughter Isan.

Norgaard admits she knew what Idris wanted to achieve would take major sacrifices, so she held on for the ride. But she says she is very happy with how things turned out for them all.

After divorcing Norgaard, Idris went on to have an affair with pole dancer Desiree Newberry. Following that, he married Sonya Nicole Hamlin though this marriage also ended shortly. Norgaard’s former partner Idris next had a relationship with another makeup artist, Naiyana Garth. This couple also has a son, Winston Elba.

Currently, Idris is married to model, Sabrina Dhowre. The pair started their relationship in 2017. Hanne’s ex-husband asked Dhowre to marry him in February 2018. The duo decided to tie the knot after a year on April 26, 2019.

Norgaard and Elba’s daughter, Isan is a student at New York University’s Tisch School of the Arts. There she is a Film and Television, Production major.

Hanne’s daughter’s LinkedIn page shows that she is also interested in acting. She was also a Golden Globe ambassador in 2019.

Isan lives with her mother Hanne in Atlanta, Georgia.

Who Is Hanne Currently Married To?

The ex-wife of the Hobbs and Shaw actor Idris Elba, Hanne Norgaard is currently married to Pastor Andrew L. Friar II. She married her current husband Friar in 2013 almost after ten years of her first marriage.

The couple was married by Reverend Dr. James Wade. After the separation from the London-born actor, Kim had stayed a divorcee for 10 years. Norgaard’s second marriage took place on a yacht cruise.

She and Friar had their ceremony with family and friends in attendance at the beachfront backdrop of Treasure Island. The two then celebrated their nuptials with a five-course meal and dancing included.

Talking about her current courtship with Friar, Norgaard, a while back ago, said is blessed to share her life with Andrew. She added her husband is not only a man of God but his patience, understanding, and confidence also amaze her every day.

“God couldn’t have given me more. Andrew’s vision for himself and his ministry really spoke to my spirit. I have always been a woman of conviction and finding a man who shared that outlook was something I had yet to imagine,”

Hanne said of her husband, Friar. Kim & her current spouse do not have any children together. They live in Atlanta, Georgia with Kim’s daughter, Isan.

Elba and his ex-partner, Norgaad’s daughter, Isan in Jan 2019 with People revealed her mother, the latter struggled with bipolar depression and chronic anxiety in the past.

She said knowing about her mother’s condition was a learning lesson for her, but it was hard. Isan said she also got much closer to her mother ever since she knew what she had gone through.

Having heard of her own mother’s struggle with mental health, the young adult now often speaks to bring awareness to mental illness in the African American community. As such in 2019, when she was a Golden Globe ambassador the teen spoke on the subject at length with her colleagues. She also revealed some personal experiences to People magazine after the luncheon in Beverly Hills.

The Jungle Book actor and Norgaard’s daughter at the time explained how much of an everyday struggle it is for a person who goes through such conditions.