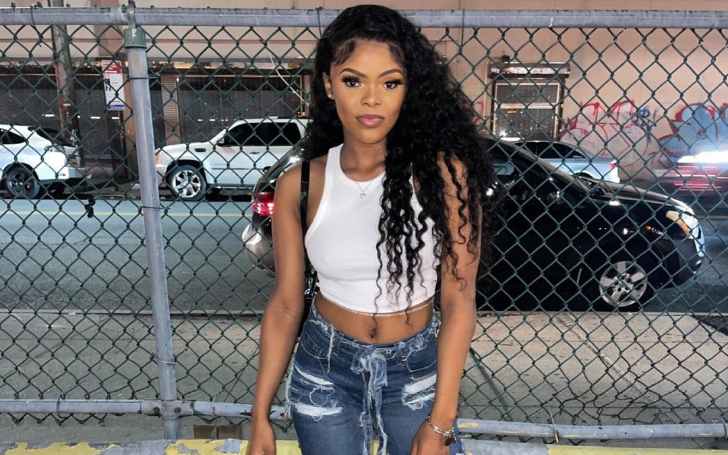 Infinity Gilyard is a YouTuber famous for being the foster daughter of Yandy Smith-Harris. Her foster mother, Yandy is a  known face in the American entertainment industry after she stepped into the reality TV show Love & Hip Hop: New York. Further, she is known for her movies like Two Days in Harlem, The Deadly Getaway, and  Illusion (2018).

As a YouTuber Infinity has over 68.1k subscribers on her Youtube Channel. More than that, she became a matter of curiosity for people after she got vocal about her bitter relationship with her mom, Yandy Smith. The mother-daughter duo even confronted the media about their anger towards each other. Well, apart from all these feudal relationships, what is Infinity doing in 2022? What is her current relationship with her mother Yandy? Who is her biological mother?

Today, this article will address all these queries regarding Yandy Smith’s daughter, Infinity along with her age, her siblings, career, love relations, and many more.

When Was Infinity Gilyard Born? Her Age And Early Life

Infinity (aka Infinity Ayko) was born on March 8, 2002, in Brooklyn, New York, the United States. So, she is currently a 20 years old lady with the birth sign Pisces. Likewise, Gilyard grew up in her hometown in the care of her biological mother named Lorraine Gilyard, and her siblings until the year 2017 when she moved to foster care.

Similarly, as per reports, Lorraine is a mother of 6 children including Infinity. However, going through Lorrain’s facebook, Infinity seems to have grown up alongside her older brother named Ice and her twin brother Infinite S Gilyard.

Besides, Infinity belongs to African-American ethnic background and is American as per her nationality.

Talking about her education, at a very early age, she attended Massiah Kindergarten, and further, she joined Cristo Rey in Brooklyn for her high school studies. Moreover, she enrolled in the City College of New York for her college-level study.

But, during the period of her study at the college, she once decided to drop out of college mentioning that college life has distracted her from her bigger purpose. In this regard, she had told,

“College is just not for everybody. I want to pursue YouTube. I think this is where I should be. This is where I need to be. I’m willing to take that risk and that’s just what it’s about to be.”

However, it seems she later changed her mind and continued her college as she has a vlog she uploaded on her Youtube channel with the title “College Day In The Life” on 19 May 2022.

Infinity Gilyard Is The Adopted Daughter Of A Reality TV Star, Yandy Smith

As we said, Infinity became popular after she became the foster daughter of a famous TV star and actress Yandi Smith-Harris. Smith and Infinity first came across in 2018  as a mentor and students and eventually, Gilyard was featured in season 9 of Love & Hip Hop: New York. During the mentorship session, Smith got mesmerized by Infinity as a result she decided to adopt Infinity.

Regarding Infinity’s adoption, Yandy once told to VH1,

“Since we wrapped season 8, I started the process of becoming a foster mom to a young lady, a young, amazing lady named Infinity. I met Infinity when she was in seventh grade and now she’s in tenth grade. She was a part of my mentorship program and she just completely stands out.”

Later in 2020, the mother-daughter duo relationship went sour. As per Yandy, the involvement of a third person (whose name is yet to reveal in the media) in Infinity’s life ruined their relationship. Further, there seem to be adjustment problems too, as Infinity chose to make her own decision that eventually arouse the sourness between them. Yandy once stated,

“She went to college. That’s first! Silly. Then second when she aged out of foster care she made the grown decision to continue to live her life as a woman making her own decisions that were outside of my rules.

In fact, in between all these, Infinity left her mom and her home which she mentioned on her Youtube Channel. She made a video with the title Yandi Kicked Me Out on 30 March 2020.

Has Infinity Gilyard and Yandi Re-United in 2022?

As per Infinity’s Instagram, it seems the mother-daughter duo has gotten back together on 2022 after their feud in 2020. On 16 June 2021, Infinity shared a beautiful post alongside her mother with a caption, “a bond i pray last foreverrr @yandysmith 👯‍♀️ on her Instagram account from which we can say they are in a better place with each other.

Further, on March 19, 2022, Infinity wished a birthday to her foster mother by captioning,

screaming happy birthday to the mother that chose me. for thiss i’ll love you 4 lifeeeeee & have your back like no otherrr. you get on my nerves but i’m thankful for you as a mentor and mother figure.  thank you for never giving up on me. i can go on and on but most importantly, i wanna say thank you for being the person you are within

Infinity Gilyard and Mendeecees Harris: What Is Their Connection?

As a foster daughter to Yandy Smith, Infinity directly connects to her foster mother’s husband, Mendeecees. They possess a father-daughter relationship and have good bonding.  During the time when Infinity became part of Mendeecees’s family, he was in prison.

Whatever their condition was in the past, later after his release he accepted Infinity as his child which is clear from the post shared by Yandy on her Instagram captioning

“If you know anything about @mendeecees, you know HE DONT DANCE. He tried, and that made my whole night. @infinitiayko got it going up”.

Infinity Gilyard’s Career Detail: What Does She Do?

By profession, Infinity is a content creator. If said more specifically, she is a vlogger and Youtuber. She makes a video of her day-to-day life and uploads it on her Youtube channel named infinitiayko where she has 68.1k subscribers. She started as a YouTuber 3 years ago and is still continuing her dream project. Once when she decided to leave her college, she had said,

That means she is interested in Youtube rather than anything else and in 2022 she is adopting it professionally. Further, she is also an actor as per her Instagram intro. Not in movies but in the year 2010, she was featured on Love and Hip Hop: New York, and likewise in 2012 in Love and Hip Hop: Atlanta.

Infinity Gilyard’s Relationship Status: Is She Dating A Boyfriend In 2022?

As per our information, currently, Yandy’s adopted daughter Infinity is not in a relationship with anyone. She has never spoken about it openly on any of her social media platforms.

But previously, she seems to be in an affair with a person older than her due to which her relationship with her mother went bad. In face to face conversation between Yandy and Infinity, they blamed each other. Yandy said,

“When that person got involved in our life, it tore our relationship apart,”

And in return, Infinity said,

“Yes, I did make a decision. You wanted me to stop, and I chose not to stop dealing with that person,

Going through this statement, a Brooklyn-born YouTuber was in love relation with an unknown man but at present, she seems to be single.

Infinity is hugely active on social networking sites. She is on Instagram under the username @infinitiayko with 329k followers. Moreover, she has a backup page for her official Instagram account, @therealinfiniti_, where she has 52.2k followers.

Further, she has her own Youtube channel with 68.1k subscribers.

Talking about Infinity’s net worth, she is worth around $250 thousand which she may have accumulated as a YouTuber. On the other side, her famous mother, Yandy Smith has a fortune of $15 million.

Who are Morgan Lee Ketzner Parents? Facts about her life