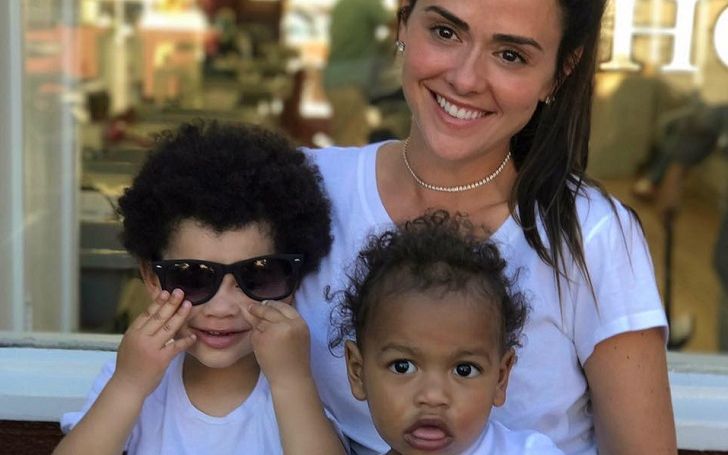 Isabella Brewster is a former talent agent who worked at Creative Artists Agency (CAA). She rose to fame as a sister of an American actress and a model Jordana Brewster.  Besides, Isabella is also popular as the ex-wife of an American former professional basketball player Baron Walter Louis Davis.

Apart from being a celebrity sister, she has made a name of her own. Isabella is known to be a casting director in Hollywood and also a Brazilian American model. She is also a  social media influencer with numerous followers on Instagram. Likewise, she is a proud mom of two children whom she shared with her husband, NBA star Baron. However, Isabella wanted to end her relationship and filed a divorce against him.

On the other hand, Isabella has always managed to come into the eye of the media through the now-and-then affairs with various Hollywood celebrities. Well, how many celebrities has she dated so far? Who are they?

Let’s take a sneak peek into Jordana Brewster’s sister Isabella’s life. Know about her details surrounding her love affairs, husband, children, net worth, and many more!

How Old is Isabella Brewster? Her Childhood

Born on 18th June 1982, Isabella is 40 years old as of 2022. She belongs to a multiracial ethnicity and holds American citizenship.

Isabella’s childhood was interesting. She traveled to a lot of places spending her early days in different nations and cultures. Brewster’s family lived in London, England, and moved to Brazil when she was 4 years old. Later, they settled in Manhattan, New York City when she was 8.

She was born into a well-to-do family. Her father Alden Brewster is an American Investment Banker while her mother Maria Joao is a former Brazilian swimsuit model. Talking further about her family, her Paternal grandfather, Kingman Brewster Jr. was a President of Yale University. He was also the U.S. ambassador to Great Britain.

To mention her qualifications, Isabella graduated from Georgetown University in 2004. She pursued her Bachelor’s Degree in Political Science and Government.

As per Isabella’s LinkedIn profile, she currently works as a producer at No Label Productions, founded by her estranged husband. While digging in, we also discovered she is an activist and a member of a community of philanthropists in L.A. There, she supports pregnant and parenting teens which she has shared on her Instagram.

Prior to this, the Brazilian-American beauty worked as a  talent agent in CAA which she resigned in 2012.

Isabella Brewster’s parents had two children, her being the youngest in the family. Since her elder sister, Jordana Brewster is only two years older than her, both the sisters are close to each other.

Jordana Brewster is now a popular American actress and a model. She debuted her career in an episode of All My Children in 1995. She has appeared in multiple movies, dramas and series. Regardless, her breakthrough was the role of Mia Toretto in the action movie “The Fast and the Furious.”

Who is Isabella Brewster’s Husband?

Isabella Brewster exchanged vows with boyfriend-turned-husband Baron Davis on 30th January 2014. He is a former American professional basket player and also a studio analyst for the NBA on TNT. The couple reportedly exchanged rings five months prior to their wedding.

Even though the pair haven’t revealed about their first meeting and how they started dating, their nuptial was not a secret. On her wedding day, her sis Jordana Brewster posted a photo with her son Julian on her Twitter.

“My bro since we were 11 years old. We’ve been through it all together and on this weekend we got to celebrate a new phase in his life… Marriage. Proud of you @monreaux85 a.k.a. Baron Davis and so happy you found your Bella. Much love.”

Many of you may not know, but it was the first marriage for both Baron and Isabella.

It seems things are not working between Isabella Brewster and her husband Davis as per they planned. That is why Isabella has already filed for divorce against her hubby in just four years of their marriage.

Yes, the love birds are no more together. Isabella cited irreconcilable differences as the reason for filing the divorce. Yet, they haven’t talked about the main cause behind their separation.

Though the petition was filed in June 2017, it took two years to finalize it. The talent agent requested the court to order Davis for spousal support as well as to cover her attorney fees.

The ex-NBA star in August 2017 agreed to the lawsuit and filed his response to the divorce. Nonetheless, he didn’t cooperate with the further process until Brewster requested to sanction Baron for not complying. As a  result, Isabella’s ex-mate finally agreed to a settlement on 18 August 2021 with joint custody of their children.

Despite their detachment, the duo still seems to be close to each other. Isabella often uploads photos of her ex-partner along with their children together. It looks like the ex-mates have separated on good terms.

Isabella Brewster is a Single Mother of Two Sons

Though the relationship between Isabella and Baron has ended, they were blessed with two sons during their marriage. The interesting thing is that the couple named their children after their grandfathers. The elder child was named after their maternal and the younger after their paternal grandfather.

Brewster and Davis welcomed their first bundle of joy, Kingman Davis on 22 August 2014. Eventually, the then-husband and wife gave birth to their second baby after a couple of years. Their youngest son, Luke Alden Davis was born on 10 January 2016.

Isabella is handling both her kids on her own and seems to be having fun with them. Also, she keeps uploading their lovely pictures on Instagram frequently.

The celebrity sister always managed to gain the attention of the media with the news of her affair with different Hollywood stars. Though Isabella’s first husband is Baron Davis, her name was linked with various celebrities before her marriage. Most of her love affairs were open in the media creating headlines.

Many tabloids speculated that she dated Bradley Cooper in 2009 and Milo Ventimiglia in 2010. She also had a romantic relationship with Katy Perry’s ex-hubby, Russell Brand.

The news of Jordana’s younger sister’s romance with Russell was all over the media. At the time the duo was dating, Brand was in the process of getting a divorce from Katy. However, it wasn’t finalized yet.

Well, it is not only Isabella who was engaged with others. In fact, her ex-mate Davis was also in a  love relationship with Rebecca Marshall, Demi Moore, and Lauren London.

The former NBA star’s ex-wife Isabella is a social butterfly. She is active on almost all social sites with numbers of followers. Brewster owns an Instagram account by the name “bellabrewster” with 29.7k followers.

According to multiple reports, the net worth of Isabella Brewster is above a million. Looking at her career, it is not surprising how she has made her worth. Nevertheless, the exact calculation of her total assets is still undercover.

On the other hand, her ex-husband Baron Davis has a total fortune of $60 million.