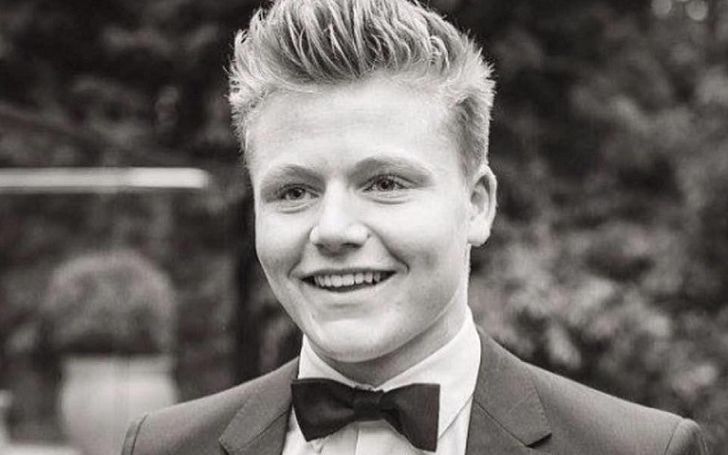 Jack Scott Ramsay is the son of the superstar chef father Gordon Ramsay and TV broadcaster mother Tana Ramsay. His parents, who have been together for over two and a half-decade, have built a highly successful path in their own ways.

But, Jack, an Exeter University alumni hasn’t been following in his parent’s footsteps. In fact, the star kid currently serves in the United Kingdom’s Royal Marines.

In addition, Ramsay has a twin sibling excluding three others. Well, here are several hidden facts about Gordon Ramsay’s son Jack Scott Ramsay including his growing love life with his girlfriend and more. So, without wasting any time, let’s begin!

How old is Jack Scott Ramsay? His Biography

Jack is 22 years old and will celebrate his 23rd birthday in the coming December of 2022. Born and raised in London, the United Kingdom, the celebrity kid was born on 31st December 1999, to Gordon Ramsay and Tana Ramsay. Being the son of one of successful parents, Jack obviously had a fantastic childhood.

Besides, Ramsay is British by nationality and has a Caucasian ethnicity.

Details on Jack’s Parents: His Mother is an Author

As said above, Jack Scott Ramsay’s doting mother Tana is an elite author, who has written seven cookery books. She now serves as a presenter of a food show, Market Kitchen. In addition, Tana popped up in a few TV shows such as Dancing on Ice, Market Kitchen, and MasterChef.

In the meantime, Jack’s father is one of the most recognized and successful chefs in the world, scoring himself sixteen Michelin stars over the course of his extensive career. He is also a famed TV personality who has appeared in a number of acclaimed reality TV shows. He appeared in Ramsay’s Kitchen Nightmares from 2004-09. Similarly, his other reality TV appearances include The F Word (2005–2010), and Kitchen Nightmares (2007–2014).

In addition, Jack’s dad Gordon now runs several other shows such as Hells’s Kitchen since 2005, MasterChef Junior since 2013, and more.

Jack and his twin sister Holly Ramsay were born on 31st December, making it a double celebratory day. On 31st December 2020, commemorating their 21st birthday, Holly shared a childhood photo of themselves on Insta. She captioned it,

“21. Happy birthday to us, thank you for being the best and always by my side.”

Holly, a Ravensbourne University London pupil is an Instagram sensation with over 315k followers in 2022. She has also mentioned herself as a digital creator on her Instagram bio.

He Has Three Other Siblings

Prior to Holly, Jack has three siblings; two sisters, Matilda Ramsay, born November 8, 2001, and Megan Ramsay, born May 16, 1998, as well as one brother, Oscar Ramsay, born April 4, 2019. All of them share quite a strong bonding with each other.

The Ramsay siblings often share beautiful photos of themselves on various occasions, flaunting their immense love and support for each other. Back in November 2017, Megan shared an adorable childhood photo with her three siblings on Insta.

Furthermore, except Jack, all of them are avid social media users. Even their youngest brother Oscar, 3, has 314k Instagram followers.

One Of Jack’s Brothers Was Stillborn; His Mother’s Miscarriage

Unfortunately, his stillborn brother, Rocky died when Tana was five months pregnant in June 2016. The renowned TV personality announced the news on Facebook, with the heartbreaking caption,

Around a year after Rocky’s passing, Megan went on to complete the London Marathon in the honor of her late brother in April 2017. She wrote on her JustGiving Page,

Like their older sister, Jack and his twin sister Holly also took part in the London Marathon in April 2018. They participated in the competition in memory of their brother Rocky with the aim to raise money for Great Ormond Street Hospital.

His Education: Studies at Exeter University

Jack attended the University of Exeter, a Public University in Exeter after achieving one A and two Bs. In the meantime, his sister Holly achieved an ABC and will be off to Ravensbourne University London.

Back in August 2018, the rockstar chef congratulated both of his twin children on Instagram with the caption,

“Well done Jack and Holly! ‘Two more Ramsays off to university. Exeter (and) Ravensbourne. I’m so proud, amazing results, ABB, ABC. Also well done to all the other students on a very tough year! Dinner’s on me!.”

What Does Jack Scott Ramsay Do? Is Gordon Ramsay’s Son in Army?

“Can’t tell you enough how proud I am of this young man Jack Ramsay you’ve made me feel like the proudest father today congrats on joining @royalmarines what amazing achievement.”

Furthermore, several of Gordon’s friends and fans also congratulated his sons on his accomplishment. In fact, football star David Beckham was one of the commenters who wrote, “We love you Jack and we are so proud of you.”

According to reports, the young boy began the corps’ grueling 32-week training course in late 2019.

Jack’s TV Appearance and Nomination for a Children’s BAFTA

Although many of Gordon’s children, including Jack, are making their own way, one of his daughters, Matilda has followed the same career path as her father. She is now a budding chef and a presenter of the BBC cooking show Matilda and the Ramsay Bunch, which is based on healthy cooking.

Back in October 2015, Jack appeared along with all of his siblings on the show. Also, they all got a nomination for the Children’s BAFTA Award.

Who Is Jack Scott Ramsay’s Girlfriend? His Dating Life

Jack is currently dating his girlfriend named Martha. Although both of the duo have remained silent about their love life lately, they are dating for over a half-decade now. The first time, Ramsay came up with his relationship status was in 2016 when the now-British-army posted a sweet snap of him kissing his girlfriend in December 2018.

However, since then, both Jack and his partner Martha have kept their love life to themselves.

How Much is Jack Ramsay Worth?

Talking about his father’s wealth, the renowned chef has an estimated net worth of $220 million.