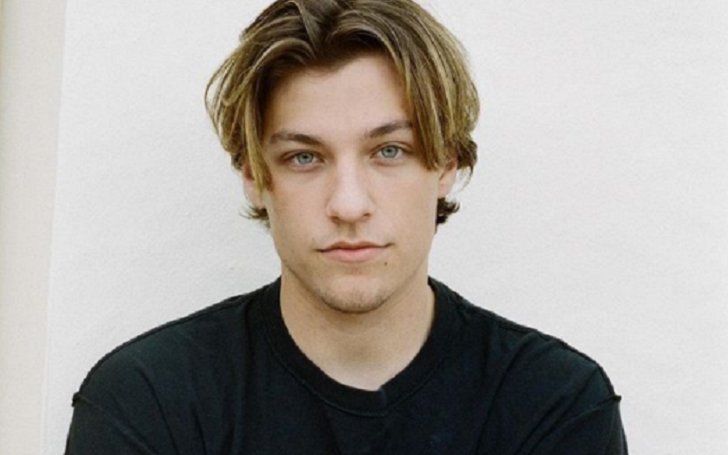 Jacob Hurley Bongiovi (aka Jake Bongiovi) has been in the limelight as a son of one of the beloved couples Jon Bon Jovi and Dorothea Hurley. His doting father is the founder and lead singer of the Grammy Award-winning band Bon Jovi. And his mom is a karate instructor and restaurateur.

Besides, Jake made headlines after started dating the Stranger Things star, Millie Bobby Brown. Although the couple initially tried to keep their love behind the public eye, they are now pretty much with each other.

For his education, Jacob currently studies at Syracuse University. The star kid also played football at his high school like his older brother Jesse. Let’s explore many hidden facts about him in the following article!

Where is Jacob Hurley Bongiovi From? His father Jetted to Attend His Son’s Birth

Jacob was born on 7th May 2002, in New Jersey to Jon and Dorothea. A day before his birth, Jon performed a private concert organized by MTV Networks in New Orleans. He later came to the hotel room but his phone was off.

In the middle of the night, his spouse Dorothea called to hotel staff to say to her hubby that her water broke. But, the singer couldn’t be by her side instantly. Jon soon went there through a private jet.

His Age and Height

Jon first came across his future sweetheart Dorothea while both of them were in Sayreville War Memorial High School in 1980. At the time, the now proud mother of four children Dorothea was dating a fellow student, but it didn’t stop Jon from flirting with her. After some time, they started dating.

But it took a long time for the duo to get married. The pair dated for many years before they walked down the aisle in 1989. Their wedding ceremony took place at the Graceland Wedding Chapel. The two have been happily married ever since they tied the knots.

Has Three Siblings: His Sister is a Freelance Production Assistant

Jacob Hurley was raised in an upper-class neighborhood of New Jersey along with his three siblings. His older sister named Stephanie Rose was born on 31st May 1993.

She attended the New School in New York, graduating with a liberal arts degree in 2017. The first-born Bongiovi child is a freelance production assistant who did an internship at The Daily Show with Jon Stewart. Rose also shares a deep bond with her father who even wrote a song called “I Got The Girl,” dedicated to his daughter when Stephanie was a seven-year-old.

He has also an older brother Jesse James Louis, born on February 19, 1995. Jesse was pretty into football while attending the University of Notre Dame. He completed his BA in Political Arts and Government from the college in 2017. As for his professional endeavors, Jesse is a co-founder at Hampton Water Wine Co. as per his Linkedin bio.

Jacob Hurley Bongiovi Played Football at the High School: Details on His College

Bongiovi first went to Poly Prep Country Day School, a Nursery-Grade 12 independent school, in Brooklyn. He then went on to enroll at the boarding school The Pennington School. At the time, Jacob played football. His parents also attended several of his football games at the school.

As for his college, Jacob now studies at Syracuse University, in Syracuse, New York. He announced about attending Syracuse on his Instagram back in Fab 2020. He shared photos along with both of his parents, wearing SU hats.

It’s is unclear what subject Jon’s son is going to study at the college. But, Jake wrote in an Instagram comment about his plan to get his doctorate someday.

Back in March 2020, Jake had contracted the coronavirus. The Bon Jovi lead singer later said that the entire family was quarantined together and always took all the safety precautions while going out for the family’s safety. Jon further told that his spouse Dorothea was quite serious at the time who didn’t allow anyone if they hadn’t a mask and gloves.

Back in 2018, when a number of students including seventeen pupils were killed during a school shooting in Parkland, Florida, Jacob and fellow sophomore Rickey Eng staunchly supported the Pennington School’s national student walkout to protest government inaction regarding the tragic incident. Bongiovi told nj.com at the time,

“It’s enough. It’s happened too many times that we watch it. And we cannot let it go away this time.”

He once also told that he was inspired by his father,

“(Jon Bon Jovi’s) really been some sort of an inspiration to me, as well, but I think it was really special that it was more the students inspiring each other. Our bravery spouts from each other.”

Jake, talking about the protest in the video,

Being the son of one of the wealthy fathers, Jacob Bongiovi has had quite a decent life. But when it comes to his net worth, the exact figure of his estimated wealth still remains behind closed doors.

Talking about his father Jon’s net worth, the legendary artist has a $410 million wealth as of 2022. He has mainly earned such a tremendous figure from his successful music career.

In addition, Jon has several sprawling properties in many swanky cities of the U.S. Back in the late 2010s, the Bon Jovi frontman put his New Jersey house around for $20 million.

Does Jacob Bongiovi Have a Girlfriend? His Dating Life

Jon Bon Jovi’s son previously remained tight-lipped when it comes to his love life. So, it was truly hard to trace out whether Jacob did have a girlfriend or not at the time.

But, for the past several months, Jake has been spotted with the Stranger Things actress, Millie Bobby Brown. The couple first sparked their dating rumors when Jake posted a selfie of the two in June 2021. He captioned the snap, “bff <3.”

A couple of weeks after their first social media post, the then-possible romantic young duo appeared together, walking around New York City. Later on, Jake shared a few other photos of themselves on his Instagram feed.

They took months to make their smoldering romance official on Instagram when Jacob Bongiovi’s girlfriend Millie posted a photo of her beau in late 2021. In the image, Jon Bon Jovi’s son is seen, kissing on her cheek.

Since then, Jake has featured a few more times on his gf’s Insta page.