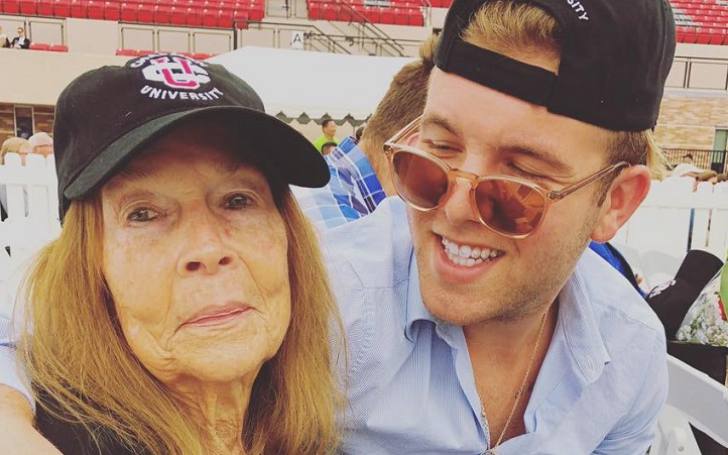 Jacob Nicholas Caan is the youngest son of actor James Caan and his fourth wife Linda Stokes. His parents had separated twice before they split permanently in Jan 2015. Know about their custody battle over their two children.

Besides, Jacob’s dad is one of the iconic faces in the entertainment business, who has worked in dozens of mega-hit film projects such as The Godfather, Misery, and Elf. Being the son of a successful actor, is the star kid also interested in show business or not?

Furthermore, the article will include many unexplored facts about him including his interest in football, college life, and more!

What is Jacob Nicholas Caan Doing Now? A Student at Chapman University

Jacob is now focused on his study. He currently studies at Chapman University and will complete his graduation by the end of 2021. He did his schooling at La Salle High School.

Did an Internship at ‘O’Gara Group’

According to his Linkedin bio, Jacob worked as an intern in the sales and marketing department of O’Gara Group, an automotive in Beverly Hills, California.

In addition to that, Caan was also a real estate development intern at Fontainebleau Development in Miami, Florida.

Where is Jacob From? Details on His Date of Birth

He was born on September 24, 1998, at UCLA Medical Center, in Los Angeles, California. Jacob spent most of his childhood days in Los Angeles with his parents.

Moving towards his nationality, Caan is an American and belongs to the Caucasian ethnicity.

Plays American Football With His Brother

Jacob (aka Jake Caan) has a brother named James Arthur Caan (born in 1995). They both enrolled at the same school and college as well as have shared the same interest in football. The Caan brothers sporadically share their photos of playing American football on their social media handles.

His father James and mother Linda tied the knot on October 7, 1995, in a private wedding ceremony. The couple soon became parents when their first child, a son James was born in November of the year.

The duo led a wonderful marital relationship for years until their drama started in 2005, the first time they went their separate ways. The two later reconciled but it couldn’t be last long and the two split for the second time in 2009. Shortly after their break-up, they again got back together and led a happy marital relationship for a few years.

However, despite their two reconciliations, James and Linda’s relationship again hit the rock but this time permanently in early 2015.

The Godfather star James Caan filed for divorce from his fourth wife Linda on 8th Jan 2015, asking for joint physical and legal custody of Jacob. On the other hand, Linda demanded physical custody of their son in her docs. She also sought spousal support from her husband. Later on, the actor started paying $13,000 per month in child support for their two grown sons.

Despite the huge figures James is paying for the benefit of his children, his wife Linda demanded more money. Because of his ex-wife’s high demand, the Hollywood star once said he wants to retire from his career but is compelled to take a minor role in the low-budget movie just for the sake of paying his wife.

Rare Outing With His Father

Back in Feb 2020, Jacob was spotted with his dad pushing him in a wheelchair in Los Angeles. The father and son enjoyed a dinner at the Vibrato Grill Jazz.

Additionally, another rare appearance of Jacob along with his father was at the Paramount Theater in Hollywood, California in Jan 2000. His half-brother Alexander Caan also joined them at the event.

Has Three Half-Siblings From His Father Three Different Marriages

Jacob has an older-half sister Tara from his father’s first marriage to Dee Jay Mathis. The two married from 1961 to 1966. James went on to marry Sheila Marie Ryan for the second time in 1976. The same year in August, their son Scott Caan, an actor was born. However, their short-lived marriage ended in 1977.

According to sources, Jacob has a $100,000 fortune. Besides, his father has an estimated net worth of $20 million. He has earned a major portion of his wealth from his TV and Film work.

Who is Jacob Nicholas Caan Dating?

Jacob is quite confidential when it comes to his love life. Due to his tendency of keeping things to himself, it yet to disclose whether Jacob is dating anyone or not.

He currently lives in Los Angeles.