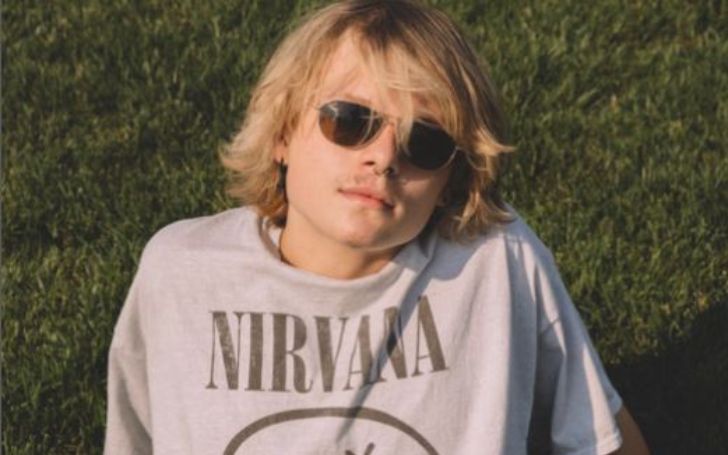 He is also famous for the role of United States Navy SEAL Master Chief Special Warfare Operator Jason Hayes in the CBS military drama series SEAL Team (2017–present). Boreanaz had his son Jaden with his wife, Jaime Bergman, a Playboy alum with whom David has been together since their 2001 wedding.

David and Bergman’s son Jaden is now a well-grown young man slowly creating an identity of his own. Know more about him in the write-up; his life as a celebrity kid, his ice hockey span, and some extras.

Jaden’s actor-father once described Jaden as a bit reserved in certain areas but said he had charm and a sarcastic perception.

Rayne started high school in September 2017 and graduated in 2021. He is currently a college student at NYU Tisch majoring in recorded music.

The six-foot-one-inches tall David and Jaime decided not to find out their sex Jaden in advance so as not to ruin the surprise.

The Buffy The Vampire Slayer alum and his ex-playboy model wife apparently chose the name Jaden for their son because the couple wanted a name with J and D in it to represent Jaime and David. Likewise, the middle name Rayne is because it rained on their wedding day and to them, it seemed like a great name.

David once explaining about his and his spouse’s choice of name said,

“Jaden is because Jaime and I wanted a name with J and D in it to represent Jaime and David and the Rayne is because it rained on our wedding day and it seemed like a great name. That way, when Jaden asks us about his names in the future we’ll have a story to tell.”

The FOX star said the birth of his son opened his eyes and made him able to see things differently.

In July 2003, sometime after the birth of Jaden, David on being a father said,

“I’m loving it, Being a father has definitely opened my eyes. I can hear things differently, and I can see through bullsh*t better. If I get stressed I just have to look at my child and realize that’s what life’s about.

Despite enjoying a prolific career as an actor, Boreanaz once said fatherhood changed his perspective on life and gave him something to look forward to more than anything else.

David said as a child, Jaden’s sister was a bit of a hurricane. Bella apparently has been an independent and free-spirited girl from a young age.

Jaden showed his interest in hockey as young as 3. His professional ice hockey career, however, allegedly began only in the early 2010s.

By the year 2012, he was already in the travel hockey program. Jaden also spent the summer of 2012 at the Heartland Hockey Camp in Minnesota. When playing for his high school in 2017, Jaden had won the regionals and had also advanced to nationals the same year.

He used to wear the number 24 and was a player in Selects Academy. His father, David once mentioned Jaden’s hockey used to take a lot of his and his wife’s time. The New York-born actor at the time also said his son’s pursuing hockey might have something to do with himself loving the sport.

David additionally said Jaden once told him how he wanted to make it into the NHL. Though in the recent, Rayne is hardly seen with a hockey stick much less donning the jerseys. It seems as if Jaden has pivoted his career priority to something else though there aren’t many official stories on that.

Jaden Rayne Boreanaz Now Is A Singer And Musician

As of the present, Jaden is more into music and has released a handful of singles. He reportedly started publishing his own music in 2021.

His music on all major platforms is under the name Jaden Rayne. The blonde Californian has about 3,679 monthly listeners on Spotify.

He Also Has A Clothing Line

Jaden apparently also has a clothing company which he reportedly launched with a friend. Their apparel line is titled Pulse Los Angeles and the business initially started with hoodies and t-shirts.

With Pulse Los Angeles, Jaden and his friends are apparently aspiring to inspire people to not only live, but to exist, be, breathe, and make an impact.

Jaden Rayne Boreanaz Has Came-of In The Series Bones

The first child of David Boreanaz, Jaden has also appeared in his father’s career-defining show, Bones. In fact, Boreanaz’s son appears in the same Bones episode as his mother Jaime, The Steel in the Wheels Bones 12:10.

In the episode, Jaden is at the Demolition Derby and comes up to Jaime’s character Dawn with a girl and asks if they can have a selfie with her.

The youngster at the time was just 14. In the same episode, David Boreanaz also manages to get in the shot with his wife and son as Booth and Brennan walk toward Jaime’s character to ask her some questions.

Does Jaden Have A Girlfriend?

While the only son of David and Bergman, Jaden is moderately active on the internet through his Instagram handle, the young adult is yet to reveal some personal aspects of his life including who he is dating or if he has a girlfriend.

For the time being, the ice-hockey player turned musician loves to flaunt his activities as a performer. He though hasn’t said or posted anything else besides those musical doings of his.

Jaden’s parents, the Seal Team star, and Jaime Bergman married in 2001. They met each other on Valentine’s day in 2001 at a party in Playboy Mansion, Los Angeles.

Initially, the actor who plays Jason Hayes and Bergman had set their marriage for September 22, 2001, but postponed it after the tragic September 11 attacks. Before marrying Jaime, Jaden’s father, David was husband to an Irish woman and a social worker, Ingrid Quinn.

Who Is Jaden’s Mother And David Boreanaz’s Wife, Jaime Bergman?

Before marrying Jaden’s father, Jaime was a household name during her stint with Playboy, where she appeared in different episodes. Before featuring in Playboy, Jaden’s mother modeled for some top agencies. She in addition used to work as a real estate agent and spokesmodel amongst other things.

Her acting career began in 1999 when with a small role in the film “Speedway Junky.”

Following that she took part in other roles before making her TV debut with a guest role in a single episode of the series “Beverly Hills, 90210.”

Jaime’s acting career witnessed a breakthrough in 2000 when she appeared as BJ Cummings in the sitcom “Son of the Beach.” She appeared in 42 episodes across three seasons.

Jaden’s mother when reported in April 2013, had become an entrepreneur and was then pursuing a new business called Chrome Girl.

Jaden Father Cheated On His Mother

Jaden’s father made headlines in 2010 when he confessed to cheating on his wife of nearly nine years, Jaime Bergman. Confessing his unfaithfulness to People, Mr. Boreanaz said,

“Our marriage has been tainted with my infidelities. I just want to be open and honest. I was irresponsible.”

The father of two came forward and said his decision to confess about his affair came in the aftermath of his mistress trying to contact an attorney and threatening to reach media outlets.

Boreanaz explained the reason he came forward with the affair was that his mistress’ lawyer had started to demand six figures. David agreed to pay the mistress some money in the beginning but decided to end all when she kept demanding more and threatening to go public.

The Officer Down star on his infidelity to Jaime said,

“I was associated with a woman who I was involved with and had a relationship with. She asked for money. I felt as though I was being blackmailed or there was some sort of extortion.”

Who Did David Have An Affair With?

Apparently, Boreanaz had affairs with two women; one with ex-Tiger Woods’ mistress, Rachel Uchitel, and the other with yet to identified woman. There were also some leakages of explicit text messages between Uchitel and the actor amidst the cheating rumor.

During the same time, Boreanaz also faced a sexual harassment lawsuit, with claims that he tried to put some moves on an extra on the “Bones” set. The suit was eventually ended, though, the conclusion remains a mystery to date.

The Bones star later nonetheless said his 2010 affair with Uchitel, was “a bonding experience, in the long run (with his wife, Bergman).” After the rumors of his infidelity were out in the open, Boreanaz and Bergman tried to salvage their marriage and seek counseling and therapy. However, Bergman once admitted that she was still angry at the situation.