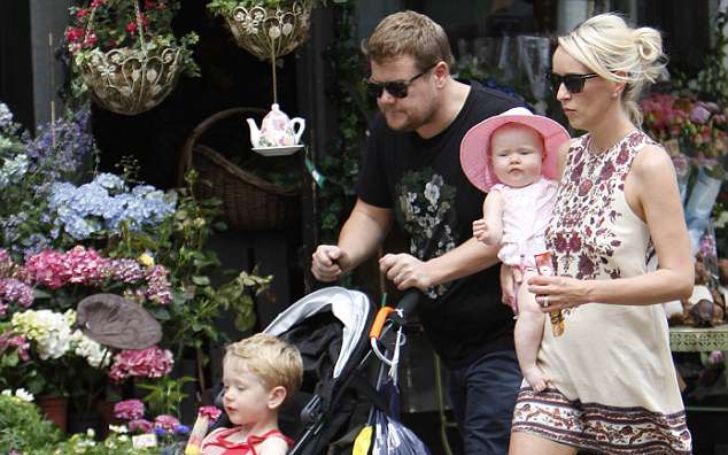 Charlotte Corden is the youngest child of James Corden, an English comic actor, writer, and television personality. Charlotte’s father is best known as the host of The Late Late Show with James Corden, a late-night talk show that has been on CBS since 2015.

Corden had Charlotte with his longtime partner, Julia Carey. James and his wife, an ex-TV producer have three children including Charlotte but keep very quiet about sharing their home life with the public. Though the Late Late Show host doesn’t share any photos of his children on social media, he has on a few occasions shared his expression on how’s life going on with his children.

Take a look at some of those incidents where he has specifically opened up about his kids though in this case more about his youngest one, Charlotte Corden. Read some peculiar memories and instances that took place during her birth time, her infant period, and further.

The youngest child of James Corden and his wife Julia, Charlotte Corden, who was born in Dec 2017, has paternal roots in Uttoxeter, Staffordshire, England.

Charlotte’s birth to James and Julia came as rather surprising since her delivery happened a little bit earlier than expected. They weren’t expecting Charlotte to arrive for another couple of weeks.

The Hillingdon-born host and his then-pregnant spouse had originally gone to a routine check-up but the doctors alerted them saying they may be having their third child anytime soon.

“We went in for a routine check-up on Tuesday, and suddenly the doctors turned to us and said, ‘Oh no, this is probably happening today. And this baby could arrive in the next few hours.’ Which was a complete shock, we were unprepared,”

Corden explained to his Late Late Show viewers sometimes after having Charlotte. Not helping the situation at all was that he then had a show to host.

The now 43-year-old Englishman also admitted that it was seemingly inappropriate and terrible of him to think about finishing the show that day when his wife was eight and a half months pregnant with the doctor talking to her about very serious things about giving birth.

“Take my word for it, you can’t say that without sounding like a dick,”

confessed the Gavin and Stacey actor. Understandably needing to be by her side James abandoned all professional duties to rush to the delivery suite, where Julia gave birth to their third child Charlotte.

Since Corden couldn’t do his titular show because of his daughter, Charlotte’s delivery, one famous name from the music industry filled in to make the episode run. And it was Corden’s best friend and the British singer, Harry Styles.

The ex-One Direction member was able to host last-minute.

Explaining Styles’ journey to becoming the host for a day, Corden said,

“So I did what I always do in a time of crisis, I called Harry Styles. I said, ‘You know, this works both ways, man. If you ever need me, I can fill in for you at one of your concerts, just say the word.’ And he said, ‘James, that won’t be necessary.’”

Later that night, Styles proved he could talk the talk too, as he hosted a lively episode filled with political quips and gender jokes. Interestingly, the Breaking Bad star, Bryan Cranston would substitute the following day.

Due to her early delivery, the now 4-year-old Charlotte almost had a name of a popular Grammy-winning artist, Beyonce. In an interview with People in Dec 2017, Corden recalling the time when he almost named his daughter, Beyonce, said,

“We still haven’t chosen a name for her yet,” Corden said on Thursday. “After the baby was born, I was crying, my wife was crying her eyes out, the baby’s crying, and the doctor asked about a name. I don’t know why I said it, but I looked at the doctor and said, ‘We’re going to call her ‘Beyoncé.’ My wife did not think that was funny.”

Despite saying the name on a hunch, Charlotte’s dad said the nurse believed it and started filling out paperwork with Queen Bey’s name. Seeing that the Peter Rabbit actor had to go over to her, stop her, and say, ‘Excuse me, there is only one Beyonce.’

James Corden And His Wife Didn’t Think Of Having Charlotte

The Bafta winner says having a third child wasn’t always the plan. Corden added having Charlotte was so far beyond anything that he and his wife ever thought.

He also said if they weren’t in California they wouldn’t have gone for a third since London didn’t have enough spaces.

After she was born, Charlotte joined her big brother Max and big sister Carey. Her brother, Max was born in March 2011.

His first middle name comes from Beatles legend Paul McCartney. Her older sister Carey Corden was born on Oct. 27, 2014. Her name is after Julia’s maiden name.

James and Julia welcomed her just before the former and his family made the move from the UK to the US so he could start The Late Late Show.

Charlotte might not have any younger siblings. As such when announcing Julia’s pregnancy with their third child, the One Man Two Guvnors actor had said to the reporters that this would probably be their last.

While the Late Late Show host at the time confirmed he was ‘excited’ about Charlotte’s incoming, he said it was going to be his last with his wife Julia.

James explained the decision of “having no more kids” to Mirror in Sep 2017 said:

“I said we would stop at number two and now we’ve got another one. So I think this is the last. We are very excited.”

Charlotte’s Parents’ Are Together Since 2009

Charlotte’s parents, James and Julia met in 2009 and married in 2012. They encountered each other at a charity event since Julia used to work for Save The Children at the time though now is mostly a stay-at-home mother.

Shortly after meeting each other, James got straight to the point, and not long after he and Julia were planning their future ahead. Charlotte’s father suggested they rather not go out like a normal couple and stay in all the week which his wife Carey agreed.

The couple has been together ever since.

Raising Charlotte And Her Siblings Has Been A Nightmare, Says Her Father, James Corden

The presenter/actor, James Corden admits raising three young children has been a ‘nightmare’. James has often joked about the strain having three youngsters had put on him.

He concluded even a simple trip to a local restaurant with all his kids is just “not worth” all the hassle. Corden in June 2018 said the time he and his wife thought of taking their kids, Max, Carey, and Charlotte to lunch was a rather terrible idea.

Remembering the lunch out time with his children, Corden said,

‘It’s just a nightmare. I got back from Liverpool on Sunday, and we thought, “Let’s take the kids out. Let’s go for lunch.” I mean, it’s a joke. We actually went to a place at the end of our road for lunch, and we looked like we were fleeing the country. We had that much stuff. It’s absurd.’

In the end, he spoke of the realization as to why his parents didn’t do anything with him and his siblings on the weekend, “cause it’s too much hassle.”

Despite the struggles of parenting, the Late Late Show with James Corden host admits fatherhood is ‘amazing’, and couldn’t imagine his life now without his children.

Charlotte Corden’s Mother And Father Had A Stalker

In Sep 2021, Charlotte’s mother and father received a temporary restraining order against a woman who the latter said wanted his wife Julia Carey “out of the picture.”

Corden rushed to court, seeking protection from the then 30-year-old alleged stalker after claiming the female has been harassing him and his family for months.

According to the documents, she used to show up at Corden’s home and his work, telling people they two had planned on eloping despite the talk show host already being a happily married man.

Charlotte’s father alleged the woman spent nearly one week in her car outside of his Los Angeles residence during the summer.

The Cats star said she didn’t leave until he call the cops. Corden alleged the woman even brewed up an elaborate story about their future wedding plans and decided to fill authorities in on the details. The female allegedly told cops she and Corden had talked about escaping to Las Vegas to tie the knot.

The stalker reportedly told police that Corden’s wife “stole him” from her and believed they could be together once Julia was “out of the picture.” The talk show host complained her behavior had been escalating, and he feared for his and his family’s safety, especially since she showed up at his home more than once.

A judge later ordered the woman to stay 100 yards away from Corden, his wife, and their kids. The court also ordered her to end all attempts at communicating with the talk show host.

What Is Charlotte Corden’s Father, James Corden’s Net Worth?

Charlotte’s father, Corden has a lower salary of $9 million for hosting The Late Late Show with James Corden, compared to the other late-night hosts. He nonetheless has one of the highest overall wealth with his net worth reportedly hovering around $70 million.

The father of three James Corden is definitely rich with him being one of the richest show hosts not only in the UK but the stateside as well. In the last 6 years or so he has had lucrative salary boosts from CBS. The British show host’s salary up until the year 2020 was reportedly in the domain of $4 million -$5 million a year.

And in 2019, the CBS channel boss reported Corden of reaching a new £5million-a-year agreement. In like manner, in Jan 2021, he had an offer of double the amount of his then existing £7million salary. Julia’s husband’s current contract runs until 2023 and that clearly means his net worth is going to get inflated to higher numbers.