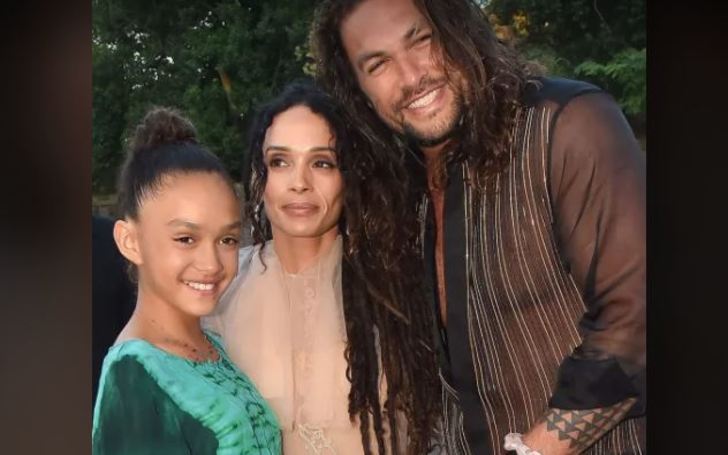 Lola Iolani Momoa is the daughter of the Aquaman actor Jason Momoa and his longtime wife, Lisa Bonet. Lola is the first child of Jason and Lisa who was born in the late 2000s. She is now a teenager and her famous actor father can’t get enough of talking about the new dynamic as well as his ever-growing love for her.

Lola’s parents are one of Hollywood’s most adored couples. The pair are quite an adoring personification of couple-goals with a family that often steals the show on red carpets or in the premiere.

Though the star couple does their best to keep their children away from the spotlight. Nevertheless, people still do wanna know about a thing or two about Hollywoodian kids. And Iolani evolving into a youngster certainly cannot stop the impending attention. So, know about her relationship with her father, what her parents think about her future; are they willing to pursue a career in acting?

Lola was born at home on Saturday, July 21st, 2007 (now 14 years old). From her father’s side, she has part Hawaiian, German, and Irish ancestry. Maternal wise, Lola is of Ashkenazi Jewish heritage from Pennsylvania and has African American lineage from Texas.

Her middle name means royal hawk. Lola’s actors-parents chose the moniker because there were hawks flying around [overhead] during the birth. Reportedly, Lisa birthed her, she had ‘long legs, lots of black hair, and her lips are the perfect shape.’  The baby was born at home on Saturday, July 21st.

Us Weekly broke the news that Lola’s parents secretly tied the knot in October 2017 at their home in Topanga, California. Although, earlier reports suggested that Momoa and Bonet had married on November 15, 2007.

Her brother, Nakoa-Wolf Manakauapo Namakaeha Momoa was born on December 15, 2008.

Through her mother, Lisa’s previous relationship with Lenny Kravitz, Lola is also a half-sister to actress Zoe Kravitz. She is known for films like No Reservations (2007), X-Men: First Class, The Divergent Series, Mad Max: Fury Road (2015). Kravitz is also starring as Catwoman in the upcoming Matt Reeves’ DC film The Batman (2022) alongside Robert Pattinson.

In November 2020, Momoa said he wants his daughter, Lola to be like Zoe; talented, loving, open, and close to her family.

Her Father Doesn’t Want Her To Become Actress

While Lola and her brother, Nakoa-Wolf spend a lot of time around people in show business, their father, however, doesn’t want them to become actors.

During an August 2021 interview, the Game Of Thrones star revealed one of his kids does want to follow him in his footstep. The Aquaman actor, however, confessed he is not a fan. While talking with Entertainment Tonight Jason said,

“I don’t want them to. I don’t know. I’ll try my damnedest to keep them out of it. I love storytelling, I love theatrical things, I like directing and filmmaking, but I just want them to, you know, really to go for other things.”

Although Lola might be able to take some adult stuff, Jason is still adamant about which of his projects she’s allowed to watch.

While giving an interview in August 2021 on the Australian radio show “Fitzy and Wippa, the Khal Drogi actor declared his children including Lola are not going to watch Games of Thrones either, even he considered it to be fantastic. He explained the show having some stuff that his kids just can’t watch. Additionally, Bonet’s husband also said his children cannot watch Conan and Baywatch.

The See actor said the age at which Lola and her brother are, he’s fine with them watching superheroes and on.

Likewise, Lola and Nokoa’s mother, Bonet, in 2014, also told Essence that she and Momoa choose to keep their household “as media-free as” possible.

What Jason Momoa Has To Say About His Daughter Lola Iolani Momoa Having Boyfriends?

When it came to discussing Lola’s growing up and her dating, her actor father, Jason said he is not ready to see that.

In the December 2020 issue of Men’s Health, the Baywatch alum opened up about how he dealt with his daughter Lola, becoming a teenager. The six-foot-four actor revealed that he cried, in part, because he is not prepared to see his eldest child begin dating.

Momoa admitted. He added he’ll hate it if Lola brings home some “dips–t bad-boy. … I’m like, ‘If you find a man who treats you better than I [treat your mom], good luck!’”

She Has Appeared In Her Father’s Short Film

Despite Jason not wanting his kids to become actors, he has involved them in his 2016 short film, Canvas Of My Life.

Lola has followed in her parent’s footsteps by featuring in The Canvas Of My Life, a short intimate film about father Jason as a husband and a parent. The film available on YouTube tells the actor’s story of how he had always wanted to be a father ever since he was a young boy in small-town Iowa.

Additionally, she and her brother has also had a cameo in their father’s 2018 blockbuster, Aquaman.

Lola Iolani Momoa Helped Her Father Prepare For A Film

While talking with E! in Aug 2021, Lola’s father, Jason reported how his real-life experience as a father to two daughters Lola and Joe helped him with his role in Netflix’s Sweet Girl.

The Justice League star discussed how he prepared for his role in Sweet Girl, which, just like in his real life, includes a father-daughter relationship.

Jason explained being a father to his daughter, Lola Iolani Momoa helped him encapsulate his character even more. As such in Sweet Girl, the Aquaman actor plays a dad who loses his wife to cancer after a pharmaceutical company pulls a potentially life-saving drug off the market. In the series, Isabela Merced plays his daughter and the two are on a mission to get justice.

Momoa said his first two babies are girls and added if he was a dad that didn’t have a daughter, it would be different. He reasoned the relationship with his daughter definitely prepared him. Ultimately, the actor said Isabela was not too far off of what Lola was like which made it easy for him.

How Rich Is Her Father, Jason Momoa?

In recent years, Lola’s father, Jason has turned out to be quite a bankable actor. The partly Hawaiian native has starred in some of the box office contenders like Aquaman (2018), The Justice League (2017), Dune (2021), among others. With the success of aforesaid movies, he has been raking a significant amount of pays and deals. Reportedly the actor also owns several properties each worth over millions of dollars.

While it is too early to discuss Lola’s net worth, her celebrity father is estimated to have a wealth of over $14million.

Other Facts About Lola Iolani Momoa

Read About Everything About Lisa Bonet’s Father Allen Bonet